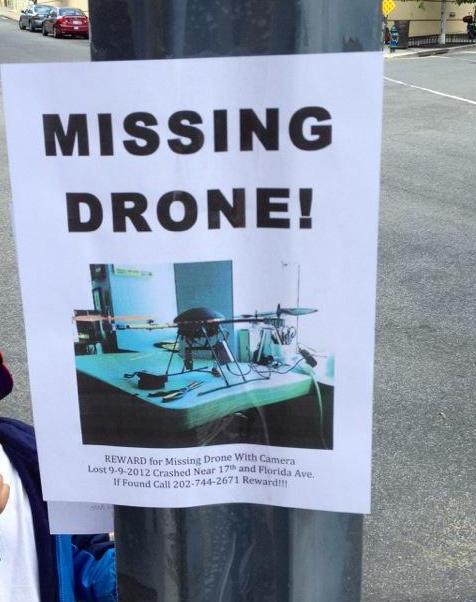 From the Lawfare blog:

This excellent picture was forwarded to me by a colleague here at Brookings. It was shot by his friend,Bonnie Shaw, who tells me that she saw the flyer at the corner of 17th and Kalorama Streets, NW in Washington.

The drone turns out to belong to one Adam Eidinger—or at least, it used to. And Eidinger is very disappointed about his loss. Eidinger, who has been tweeting the matter, tells me that he uses his drone to take aerial videos of Washington D.C., most of which you can find on his YouTube channel.

Last Friday, Eidinger informed me that he wanted to take a short video of a festival in Adams Morgan, and was flying his quadcopter from a rooftop on 18th Street NW. A huge gust of wind blew it too far south and Eidinger quickly lost orientation. The copter was almost 5,000 feet away from him, and he couldn’t tell which way was forward and which way was backward. When his remote loses contact with the drone, says Eidinger, the copter is programmed to slowly descend on its own—a “safe landing mode,” which prevents it from simply falling out of the sky and crashing. So it’s possible that the quadcopter is sitting on a rooftop somewhere in the area—maybe even on your rooftop (have you checked?). Eidinger doesn’t think it has fallen in a public place, because he says he canvassed the whole area and had no luck.

The quadcopter is 2 ft x 2 ft and was purchased in China, says Eidinger, because there are virtually no commercially available units like these in America. Eidenger customized it, and the total cost of the contraption was about $700.

It really is kind of amazing how the proliferation of cheap technologies has revolutionized the way we interact with our communities and surroundings.

(Thanks to Christopher Downing for the link)