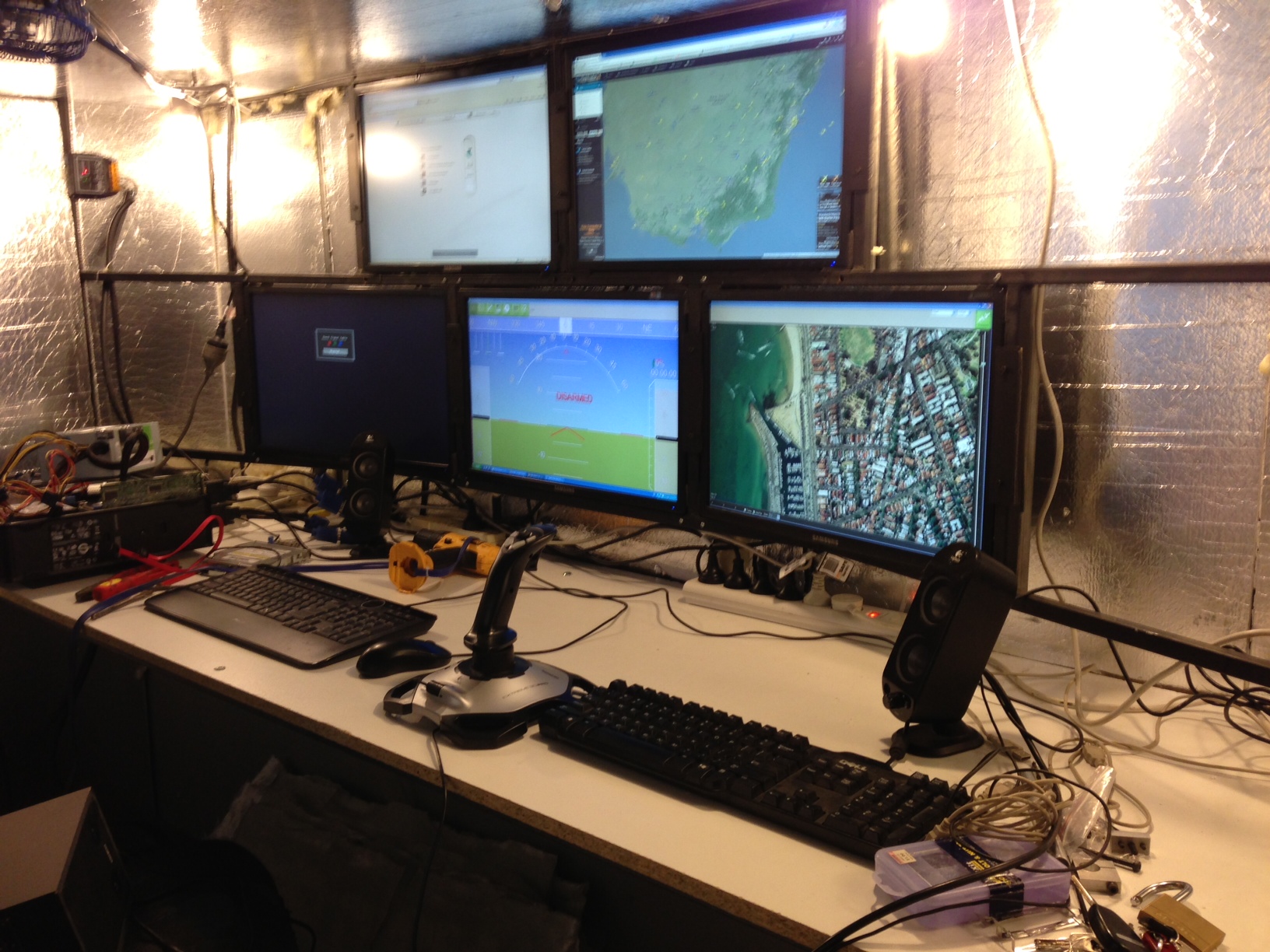 So this is blog number 3 of my home made Ground Control Trailer build, and home made drone build, and as the title suggests, I have re-designed quite a bit of it on the fly.

Firstly, the GCS trailer is completely finished. All insulated, and powered up. And the old 6x9 trailer that it is based on has had a spruce up with new tyres, wheels, bearings, LED lights, safety chain, etc. Inside you can see 5 permanently mounted LCD screens. Four of the screens are connected to a single PC through a 4 way graphics card, and the fifth connected to a laptop. The idea is to use one PC for most functions, including Mission Planner, web based weather radar, and video feed, and for the laptop to serve as a backup if the main PC or data link fails.

External to the trailer there is a 4 metre steel telescopic antenna mount for an RFD900 radio. The higher the radio, the better the range after all. I'm looking forward to doing some range tests!

Now for the drone build.

I decided that the tailplane in blog 2 was too heavy and the fibreglass that I was using was too thick. So instead of pressing on and trying to fly the plane, I made the reluctant choice to rip it all off and use a thinner glass fibre. Also, the tail plane was still feeling on the heavy side, so I made up a new one with solid flat balsa wood. Much lighter, and less drag than the foam fiberglass tailplane that I scrapped. 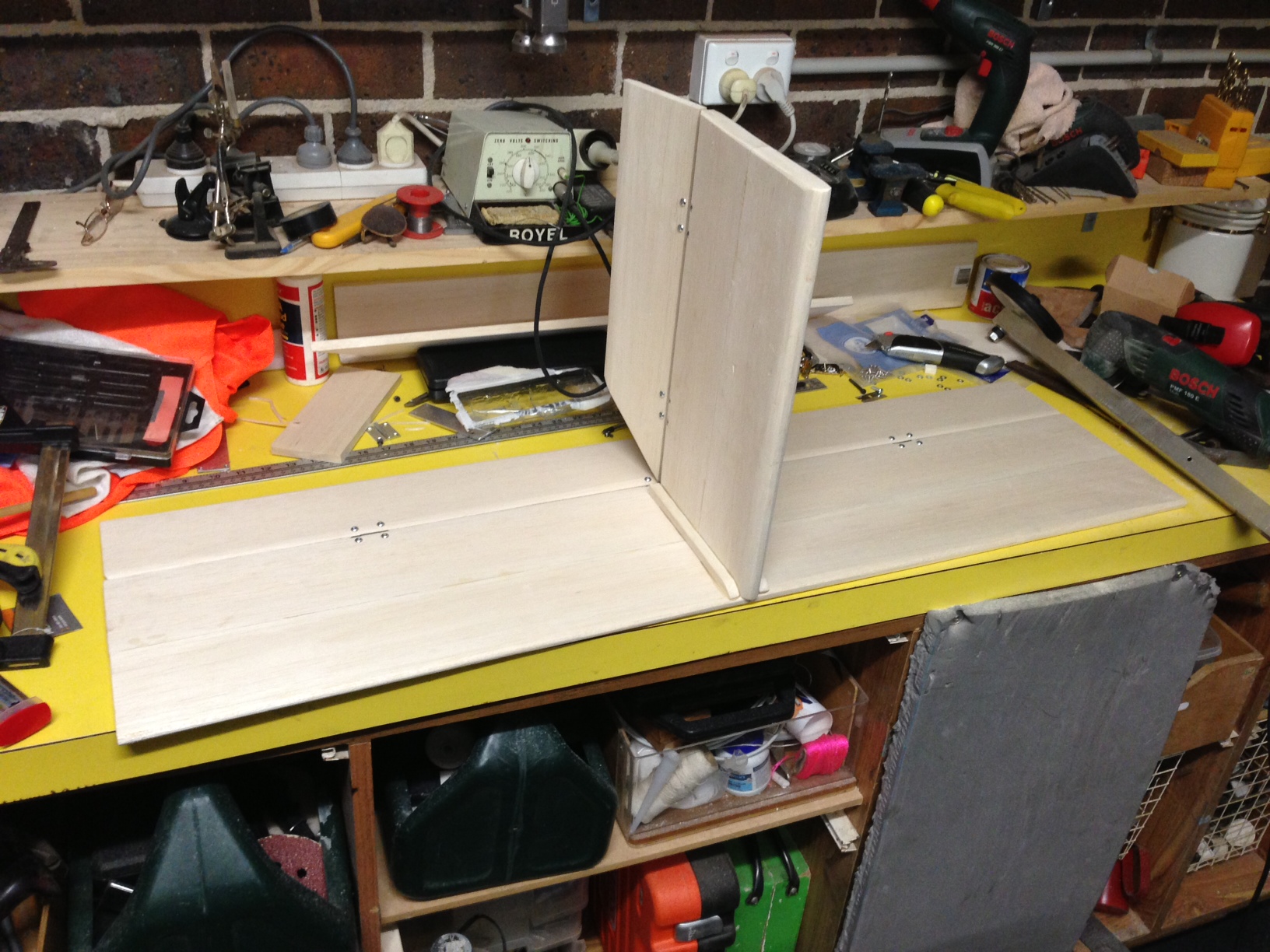 Also, one of the biggest changes was a complete re-design of the fuselage. The original plan was to build the fuse out of water jet cut aluminium, bent into a box. I started the solidworks model, but I couldn't get the weight down no matter how hard I tried. So I decided to go for a fuse built with 25mm box section extruded aluminium. The walls of the box section are only 1.2mm thick, so it is light, but very very strong. So strong that after building it, I feel that I have over-done some sections, and I could have gotten away with less material.

Anyways, here it is so far with a foam surround. The top cover will be corflute material strengthened with a few aluminium stringers. The entire fuse has a flat bottom, with rounded wing cross-section, so I hope that it will add to the lift generated by the wings: Unfortunately some aluminium dust got rubbed into the wings, which makes it look like a bit of an ugly duckling in the next photo. I might paint it, I might not. Never mind, I'm not terribly interested in looks. The aim is to have a long range drone capable of carrying a good amount of electronics. Just to add to the list of changes, I changed the two rods connecting the tail plane to the fuselage. The old 16mm ones seemed to be strong, but after mounting, I felt that they were too flexible, so they had to be changed to, you guessed it, 25mm box section aluminium. It just goes to show, that even with good PC design tools, sometimes a bit of trial and error never goes astray. With the added width of the new fuse, the wingspan is now 3.5 metres. That 50cc engine I had planned to use is starting to look a little small for a plane which is starting to tip 25 Kg fully loaded. So my next mod may be to add another engine. One 50cc engine in a pusher config at the back, and one 50cc engine pulling from the front. A two engine set-up would ensure good acceleration and take-off time, and would also help in reliability, as only one engine would be needed to stay airborne.

Hopefully the next blog will have a vid of the maiden flight. It might be just a few weeks away. Can't wait!