A XUAV Talon is a relatively heavy airframe (between 2,5 and 3Kg depending on its configuration) to launch. Other EPP/EPO FPV large airframes come in the same weight category. So, how to launch/take-off with such large/heavy UAV planes ?

There are three ways, that I know of, to take-off :

-requires two people : one keeping both hands on his Tx control sticks; the other one throwing the plane in the air.  A two man operation is not always convenient nor possible on the field.

-it is dangerous : the propeller might shred the launcher's hand...

-requires a runway, long enough & flat. Not really like that in real fields.

-requires wheels on the front, back (or wings) and a steering system : not available on all planes such as the XUAV Talon.

The catapult build published hereunder attempts to be a synthesis of lots of ideas and information found on diydrones, rcgroups forum & rc experts youtube videos.

This catapult system is a built intended and tested to launch a XUAV Talon, i.e. a large 2 m wingspan FPV plane (wing extensions) in the 3kg weight category.

This guide first describes the parts and assembly steps; then a result video of (succesful) field tests is shown at the end. Two types of ropes are required. An elastic rope (a sandow) will provide the force to catapult the plane. A second non elastic nylon rope (or any other strong enough rope) will pull the plane (via a hook fixed on the plane, see further) and will be used to trigger the elastic sandow.

The sandow is shown herebelow:

On one side of the 10 m sandow is a loop that will be fixed on the ground by a (very strong) tent hook. On the other end, the sandow attaches to the nylon rope.

The nylon rope part is shown below:

On one end the nylon rope is attached to the sandow as shown below:

On the other end the nylon rope ends with a loop that will be fixed on the ground with a (very strong) tent hook. This last extremity will be released to trigger the elastic (see further).

At about 3 meters from the sandow-nylon rope junction, a Y is formed : a one meter nylon rope piece and a piece of about 5 meters. The one meter piece ends with a loop that will be attached on the plane's hook. This is the piece that will pull the plane out of the catapult. The other (5m long) piece will act as the trigger (when released from its ground retaining tent hook).

The catapult body is assembled with PVC tubing. These PVC tubes must be large enough to support the weight of the plane; therefore a suggested minimum diameter of 35 mm.

The longest tube part is about 150 cm; therefore three 2 meters long tubes are enough for the build.

The tubes are glued together, as show on pictures below. Two types of PVC junctions are used : T's and 90 degree angle, 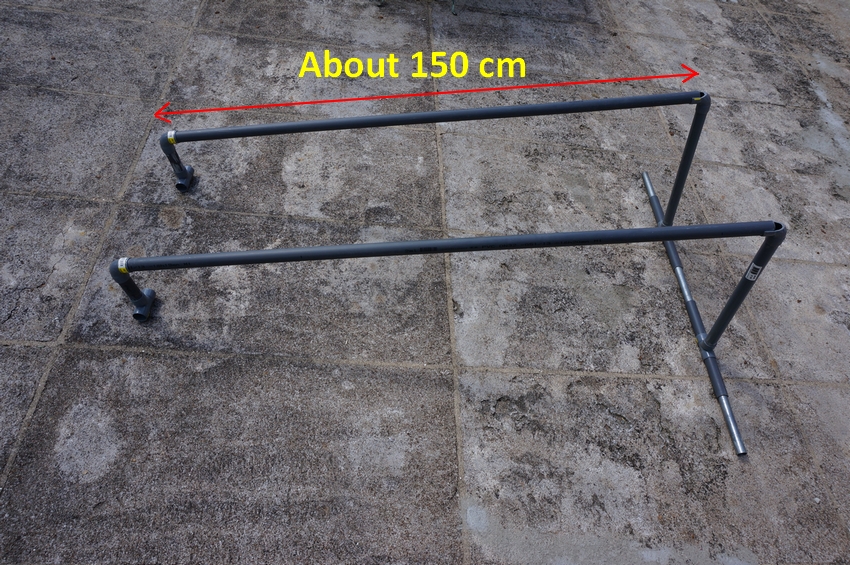 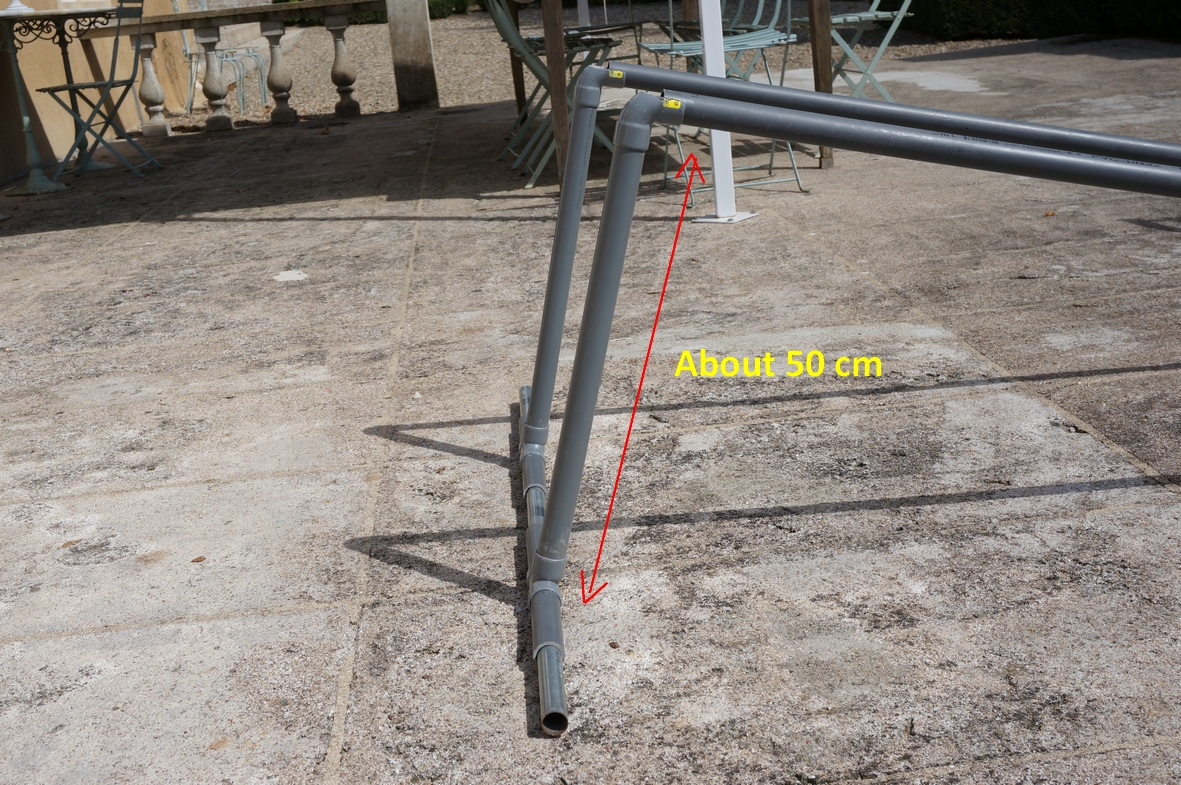 The length of the front and back "legs" of the catapult are chosen so that the launch angle is not too steep and smaller than 45 degrees. The resulting angle with these given dimensions is about 30 degrees max. 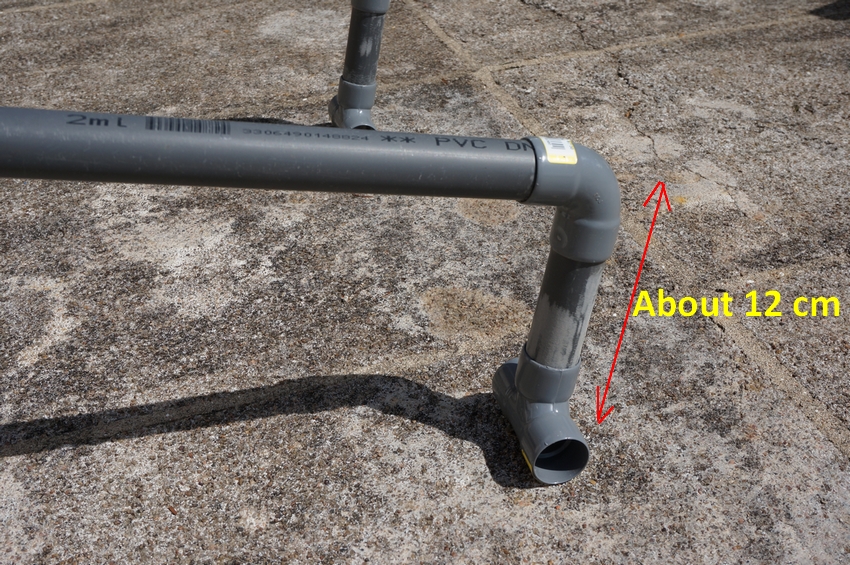 The plane, when pulled by the rope, will glide on the two top PVC tubes. The plane wings would get ripped if gliding on the two 90 degree PVC connectors; they must therefore be trimmed, as shown below: To adjust easily the width of the two left/right catapult rails, a metal bar (of smaller diameter than the inner PVC tube diameter) is inserted horizontally inside/between the two front legs, The plane left and right wings sit on top of the catapult PVC left/right PVC rails: To measure this, the sandow extremity is first fixed to a point in the ground with a tent's hook. The other end of the nylon rope assembly is attached to the scale hook; then pulled until 5x the weight is read on the scale. This gives the position where the nylon rope will be released to trigger the sandow (cf video below for a visualization of this explanation).

The 1m nylon rope section (forming a Y junction), attaches to the plane, on the plane's bottom hook. This one meter section must also be kept in a streched state when launching.

The plane's hook must be strongly secured so as not to be ripped off when releasing the sandow brutal force. This cannot be fixed on foam only; it needs plywood or aluminium reinforcements. On the XUAV Talon, the optional plywood landing gear base is used to securely fix an aluminium hook:

The hook must be placed slightly in front of the CG line of the plane. On the XUAV Talon, the CG line is located at about the servo wires position on the wings (see picture).

If the hook is not located right, the plane will not be pulled right and will eventually flip to the sides or upside down.

The results in video