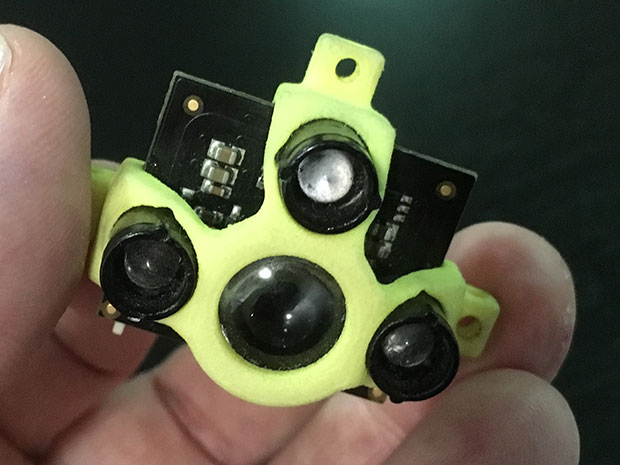 The World Wide Web is the most famous technology to emerge from the needs of the international particle physics research center CERN, but it’s not the only one. In the latest example, a lightweight, inexpensive (and maker-friendly) range sensor has come about because scientists want to use drones to survey tunnels and vaults without smashing into expensive and difficult to replace equipment.

They approached a drone services company, but it was soon discovered that there was no way to create a drone that was small enough to operate in the cluttered spaces and yet had sensors that would let it locate itself with enough precision to avoid collisions. The result was the founding of Terabee in 2012, explains Massimiliano Ruffo, the company’s CEO, who I met at CeBIT’s airy press center yesterday.

In 2015 Terabee was recognized formally as a CERN spin-off and selected to join the research center’s business incubation partner Innogex. Terabee began selling its first sensor, the TeraRanger One, the same year.

The matchbox-sized TeraRanger One sells for 125 euro (US $140) and weighs just 8 grams. Measuring the time-of-flight for infrared pulses generated by an LED allows the TeraRanger One to determine the distance to a single point-like region ahead 1000 times per second. The maximum distance that can be measured indoors (or, of course, underground) is about 14 meters, with a range accuracy of four centimeters. Ruffo says that with some sensor-by-sensor calibration and a slower rate of measurement, the accuracy can be increased to about two centimeters. Maximum distances closer to five to six meters are possible in sunlight.

The TeraRanger One’s onboard electronics takes care of all the post processing required from the sensor’s raw time-of-flight data and spits out the distance as a number that represents the number of millimeters measured. A5-volt UART serial interface is used by default, and a 5 V I2C bus can be used with a firmware change, making the sensor trivial to hook up to an Arduino, and only slightly more complicated to connect to a Raspberry Pi. (That’s due to the latter’s aversion to voltages higher than 3.3 volts).

Inexpensive ultrasonic range finding sensors of TeraRanger One’s size and weight have been available for some time, but they lack its speed and angular precision. LIDAR systems, which often employ a rotating mirror to scan a sensing laser beam around, are also fast and provide high resolution at good distances but are bulkier and more expensive than the TeraRanger One. (Although that may change if DARPA’s phased-array LIDAR-on-a-chip ever comes to the mass market.) Stereo vision systems are another alternative for rangefinding, and can provide depth information over a wide field of pixels, but Ruffo believes that TeraBee again has the edge because the time-of-flight data produces more reliable distance measurements over a longer range.

For systems that require more complex measurements, such as those the doing the kind of SLAM (simultaneous location and mapping) required for the original CERN surveying, TeraBee currently offers a hub which allows measurements from up to eight separate sensors to be integrated. A pre-built eight sensor “tower” is in the works, says Ruffo, and the company also offers an evaluation version of a small LIDAR-type scanning platform.