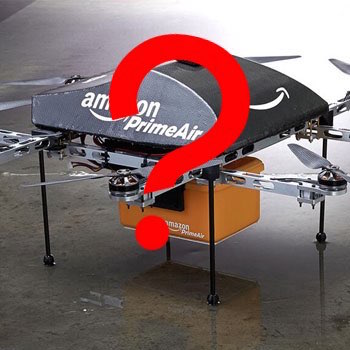 Back in May Chris posted a news item about Amazon's drone based delivery system patent which got some attention but most people missed a crucial claim in it:

This means that Amazon now holds a patent on a SLAM mapping drone (or any non specialised drone) updating a model of an environment in real time which another drone can use to navigate within that environment.  If the patent is applied broadly this could mean the following scenarios could infringe upon it:

1. If a drone crashes into an object not in an environment model, and sends a crash report to the central/shared model, updating the model with the location of the object could infringe the patent.

2.  If a drone senses/sees a fire, and a second drone is dispatched to the fire to deliver firefighting gear/equipment/suppressants, the system could infringe the patents.

3.  If a drone receives a call for first aid/defibrillator but is not rated to carry a load that heavy, so calls a second (heavier load) drone to pick up and deliver the lifesaving equipment, it could infringe the patent.

I believe this is huge problem going forward and should be a concern for all hobbyists and professionals working on mapping, SLAM drones and swarming.

As I've mentioned before, I believe some of the work I did with the Physical Package Protocol (formerly Pigeon Post) invalidates most of the claims in the patent (though I could be wrong), but I don't have the money/knowledge/skills/lawyers to challenge Amazon.  On the other hand, if anyone in the future has the resources and wants to free up the field from the threat of this patent, I'll be more than happy to provide proof of prior art, etc.