Here is a picture of my little JVC Adixxion, replacement for my malfunctioning GoPro Black. 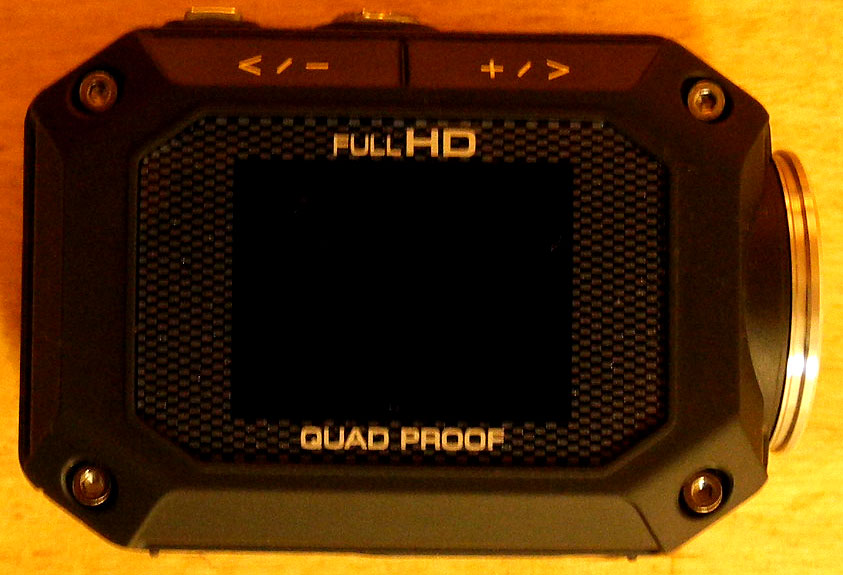 As you may know I published a BLOG of my experiences and trials and tribulations with the much vaunted GoPro Hero 3 Black.

Finally after much wasted time dealing with the GoPro Company sent it back for a refund I started searching for an alternative camera. I considered both the Sony Sport Cam and this little JVC Adixxion.

The Adixxion seemed much the better camera but was $350.00.

After Christmas I found an incredibly short lived deal for $99.00 and immediately purchased the Adixxion.

The overall experience with this camera for me has been the complete opposite of the experience I had dealing with the GoPro Camera and the GoPro Company.

Namely I am very happy with it.

Size and form factor are better than the GoPro and even more so when the GoPro has its case on it.

Has standard mount base screw socket on side and bottom (and picture can be inverted so camera can be used upside down).

5x digital Zoom works without image degradation on 1080P due to large camera chip. Not in GoPro.

WiFi live preview actually works on IPad and with computer and with negligible delay (less than 1/2 second).

Much easier and more intuitive 6 button menu and navigation than 2 button GoPro.

Single battery life is better than the GoPro with the additional add on battery.

Nothing malfunctioning at all.

(You do need to do a firmware update from the JVC web site for the WiFi to work properly.

Dislikes (none major to me):

Night time video not as bright as GoPro.

Doesn't have all the fancy super high resolution video modes the Black had (of almost no interest to me anyway).

Although the IPad and PC based WiFi worked much much better than the GoPro, the Adixxion does not currently support direct connection to an Android so my Nexus 7 is not of use to me for WiFi at this time.

Basically a lot more to like than to complain about, really glad I got it.

Haven't tried the WiFi live preview while flying yet, but will report back on the results of that, live preview actually does work well enough to use it for FPV so long as the camera WiFi and the RC signals do not interfere with each other.

GoPro should take a lot of cues from this camera for their future efforts.

If they get the bugs out of the Black it will be a cool camera, but right now, this is a more useful camera to our RC community in almost every way.

Even if you have to pay full price, you won't be unhappy with this camera, but if you can find any kind of deal at all (Amazon currently $250.00) you'll make the GoPro owners envious.