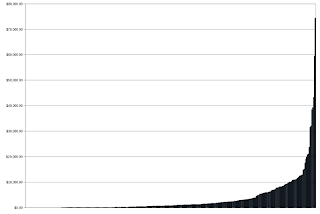 If you don't have dreams of launching a UAV project on kickstarter, making zillions of dollars, & quitting your unemployment compensation, you're crazy.  So here's a quick graph of kickstarter funding for "currently funding" LA projects, which is the easiest data to find on their mane page. This was the only easily copyable data set & includes all the future unsuccessful & successful projects.

It's definitely flatter than wealth distributed by the government, but even with the crowd, the trend is definitely the same.  You see the same trend of concentration of wealth near the very top in food, longevity, dating & marriage.  It's hard to beat biologically wired behavior.

Assuming you want something to break even & you're American, so you're probably unemployed, you need around $2000 to pay 1 month of the cost of living + the cost of parts in the widget + taxes.


Kickstarter takes 5% of the cut for their CEO running a server & Jeff Bezos charges another 5% for being Jeff Bezos credit card processing.  Anything not spent on your own business expenses, kickstarter reports to the IRS as ordinary income, so you have to pay another 10-30% in taxes.  Fortunately, if you're American, your taxes should be under 10% because you're unemployed.

If your cost of living is your margin & you shoot for no profit, you're looking at $400 of taxes + $2000 to survive + parts, for every month it takes to produce the thing.


If it takes 1 month to finish all the orders & the widget has no parts, you need to be better than 29% of the projects.  In reality, nothing is finished in 1 month.

For a real focused job, a real simple widget, producing exactly what the customers want & no diversion to your own needs, you're looking at 3 months or $7200.  Attopilot took at least a year or over $28,800 just for the cost of living + taxes.  Only the top 2% make that much on kickstarter.

The money is conceivably easier, but how many of those kickstarter investments are really due to kickstarter clicks & not people the maker didn't already have a network with or the maker worked his ass off selling to?

At least 1 investment is going to be from the mother.  I suspect most of the money is coming from pavement pounding sales.  Kickstarter of course, would insist that all the money was because of clicks.

As a way to replace your day job, fuggedaboutit.  As supplimental income on top of a day job, it's certainly there.  You won't make as much on kickstarter as you would putting the same amount of time into a day job, but it could certainly allow you to build something.

It may not allow you to think very far outside the box.  Unless you're Steve Jobless, people don't buy stuff that's too different.  What could be real crazy if you went with your own money has to be a bit more conforming to get someone else to pay in advance.

There's never a free lunch.  When you ask for advance payments, you have to deliver what customers think they want & that is never exactly what you want.  You always have to give up some freedom to get someone else to take the risk, whether it's a crowd or a government.