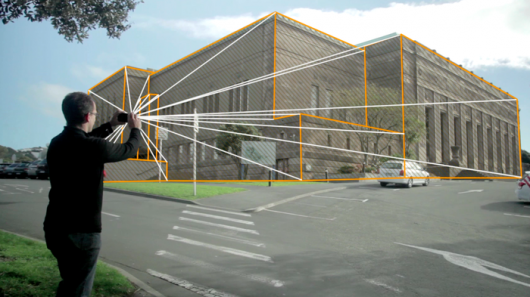 Not sure how I missed this successful Kickstarter campaign from October, but here's more from Gizmag:

Virginia-based IkeGPS wants to bring this functionality to the mainstream. And what better way to do it than sticking it on the back of a smartphone?

Spike builds on the company's established GIS (geographic information systems) tools, which were used by the UN in the wake of natural disasters such as Hurricane Katrina and the 2010 earthquake in Haiti. The device attaches to the back of a smartphone and combines a built-in laser range finder, 3D compass and Bluetooth chip with the phone's camera and GPS.

Users take a photo of the object they wish to measure through the Spike companion app on their smartphone (the team has nearly completed an Android app and has an iOS app in development). The hardware then measures key metrics, such as distance, direction and volume and communicates this data to the smartphone via Bluetooth, displaying the augmented results on the screen. Users can then share this data, or use it to produce 3D models with what the company says is laser accuracy.

According to it's successful Kickstarter campaign page, the company will allow third party app developers access to an API (application programming interface), enabling the embedding of specialist ikeTools into applications in anticipation of augmented reality and location based services apps.

Spike is also compatible with 3D modeling software SketchUp. This means that rather than importing measurements manually, users can take an image with Spike to reproduce a scalable model of the object or building and 3D-print it as required.

Spike can be pre-ordered via IkeGPS's website for US$559 with shipping (included) estimated for May 2014.