Measurements of the height above ground up to and beyond 250m (820 feet) provide important information to many different types of aircraft. For commercial and military drones operating beyond line-of-sight or light aircraft and helicopters operating in uncontrolled airspace, knowing the height above ground is a critical safety requirement. Accurate AGL measurement is also important for precision photographic work in surveying and wildlife conservation.

Our new SF00, long range laser altimeter includes some interesting features that provide high reliability data even under difficult operating conditions. The long range capability can increase the chance of detecting background noise and the requirement for redundancy in critical systems means that the SF00 has to be able to recognize it’s own laser signature against a background of similar signals. Addressing these challenges has lead to significant improvements in laser altimeter performance for mission critical applications.

Under normal conditions the signals detected by a laser altimeter are clean and have a high SNR so measuring the time-of-flight to centimeter precision is no difficulty. In the image below the blue trace shows the “measurement window” during which a return signal is expected and the yellow trace is a typical return signal. Signals outside the measurement window are ignored. In situations where extreme background light and high temperatures are experienced, noise in the form of stray photons or high energy electrons can create interference on the return signal. Internal control systems continually monitor this noise and make adjustments to the amplifier circuits to minimize its effect but there is always some residual noise in the system. Differentiating between this random noise and the return signals is critical to getting stable results. The SF00 does this by performing a statistical analysis on groups of measurements to establish their standard deviation. Groups that contain noise have a higher standard deviation than groups containing clean signals. Noise due to background light and temperature effects

In high reliability systems it is not uncommon to use two laser altimeters aimed at the same point on the ground. Under these conditions it is possible for one unit to detect the return signal of the other since the lasers have the same wavelength and firing frequency. The SF00 deals with this in two ways:

Firstly, there is a “channel selection” that changes the firing frequency of the laser. This reduces the probability of the return signal from one unit showing up in the measurement window of the other. However, there is still a finite probability that a subharmonic of the different firing frequencies will continue to permit crosstalk.

The second approach is to randomize the laser firing frequency. This introduces “spread spectrum” like properties into the return signals increasing the probability of “self identification” whilst giving external signals the properties of random noise, and as mentioned above, the SF00 has a method of identifying and removing random noise. 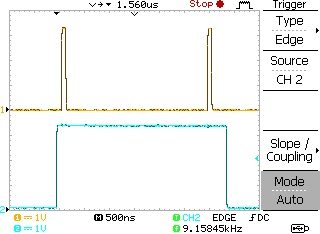 Cross-talk in a high reliability application

At the limit of performance, it is possible to have a weak return signal mixed with random noise and cross talk from other lasers. The SF00 handles this by adding another layer of analysis that examines groups of results and makes a decision on the most probable altitude. If the probability is too low then it finally surrenders and warns of a lost signal condition.

The SF00 includes USB, serial and analog interfaces along with two set point alarms. Power is +5V at 250mA or USB and the maximum measuring range is > 250m at a resolution of 3cm.

Thanks for reading, L.D.