I've had great success doing mapping with my Aeronavics hexacopter using a Pixhawk and Sony NEX 7 camera. But I wanted to start covering larger areas so I decided it was time for me to have a go at flying fixed wing aircraft. I started out with the excellent Volantex Ranger (HobbyKing sell it as a Quanum Observer) but the camera was a bit large for it so a friend suggested I have a try of an X8. We dragged a dusty old test X8 out of another friends garage and off we went. It wasn't long before we figured out how to bungee launch and auto land it thanks to some help from Tridge:

And just today I finally managed to get the camera mounted and triggering from Mission Planner thanks to CUAV team member Jack who made a custom cradle to hold the camera. He also added a wire frame skid around the launch hook and a little skid pad on the rear of the plane to smooth out the landings. Up to this point we have only flown the plane with a single battery and no camera, so I was a bit worried when we launched it today that it might not accelerate fast enough to lift the extra payload. When I released the plane it launched almost exactly the same as before adding the camera and extra battery. 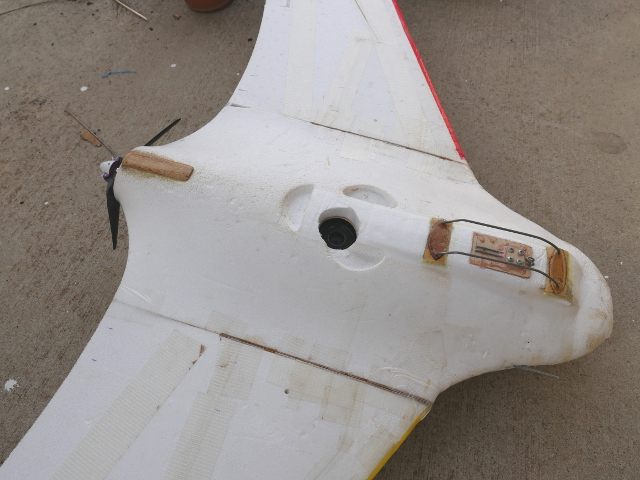 So it was great day of flying and we are looking forward to our next test in a few days where we will be testing the endurance and doing some test mapping runs.