The above flight track highlights the performance of the latest version of the navigation algorithms in MatrixPilot. Flight tracks are from a flight that Peter Hollands conducted. (Thank you, Peter.) The red and the green tracks represent flight segments in opposite directions between the same pair of waypoints. The tracks are nearly perfect straight lines 243 meters long, with deviation between the two tracks of no more than 3 meters, in heavy winds. You will have to look closely at the picture, the two tracks are nearly on top of each other.

Winds are shown in the following picture. 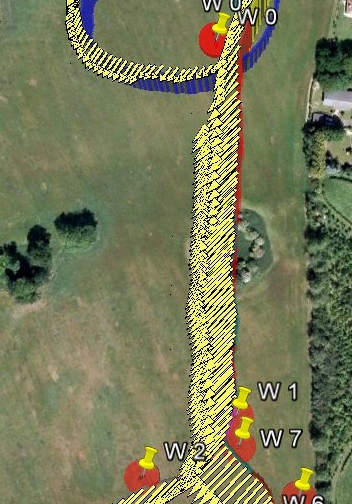 This precision navigation is the result of several recent innovations in the MatrixPilot algorithms. The main innovation is from Paul Bizard, and has to do with using IMU course over ground instead of heading for navigation. (Thank you Paul.) Paul has taken us full circle on this:

1. The first version of MatrixPilot used GPS course over ground for navigation. This had the advantage of not needing wind information, but suffered from GPS latency.

2. The next version of MatrixPilot used IMU heading for navigation. This eliminated GPS latency effects, but required wind to be included in navigation computations.

3. The next version of MatrixPilot used IMU for position estimation.

4. Recently, Paul pointed out that the MatrixPilot IMU furnishes course over ground, and that would be much better than heading for navigation. So we went full circle, we are back to course over ground. But now it comes from the IMU, not GPS, so there are no latency effects.

We also made several other improvements to the navigation algorithms:

1. We totally eliminated the use of angles in the navigation computations, everything is now based on vectors or matrices.

2. We are using 32 bit integer arithmetic in several places. This combines ultra-fine resolution with wide range.

3. We added a cross-track velocity damping term. This allows the cross tracking gains to be turned up without inducing a "dutch roll".

For more information on MatrixPilot, see its diydrones page, or its website.