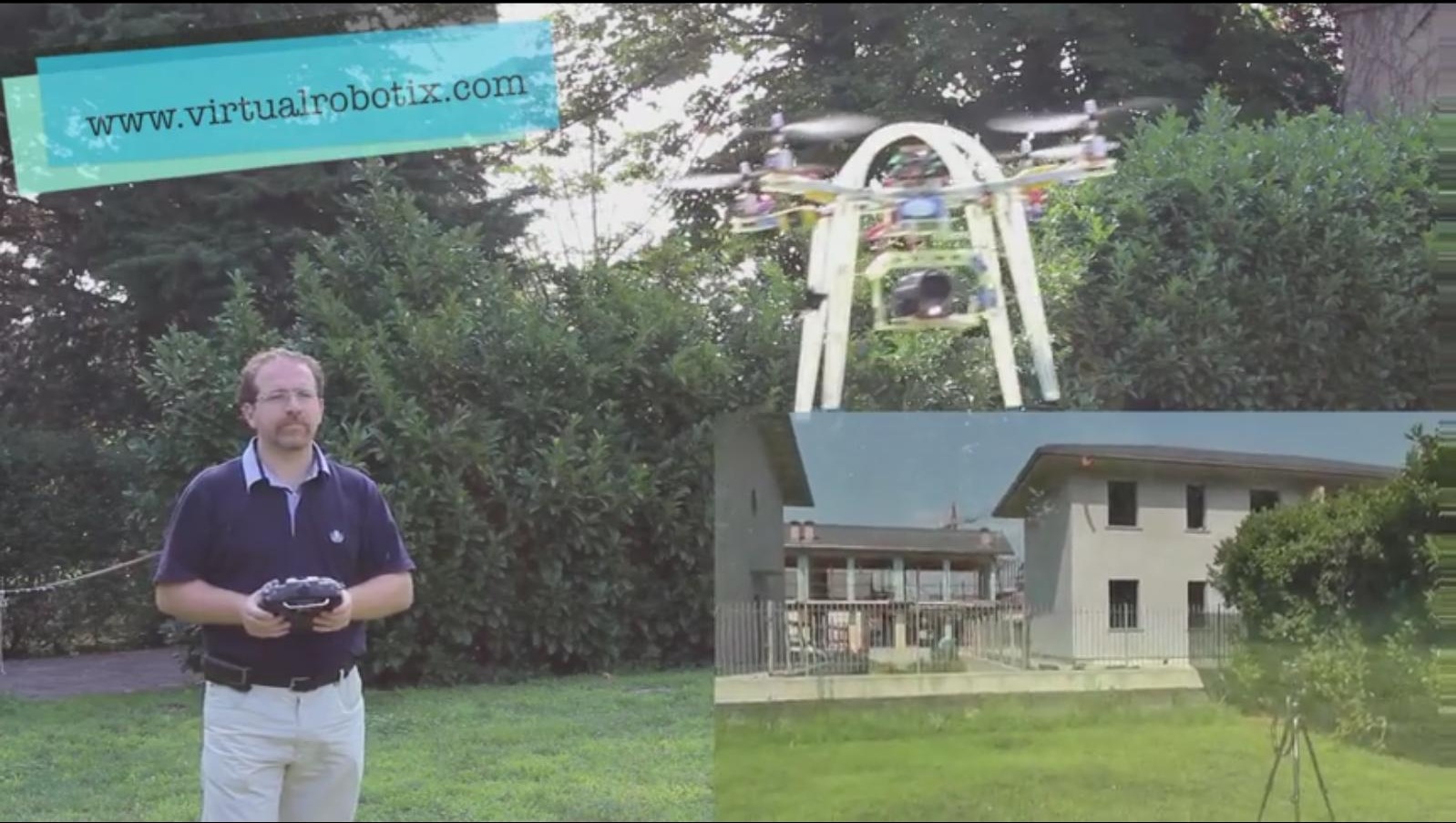 This week's Meet the Developers series starts out with Roberto Navoni, who leads the Foxteam group in Italy that have been doing amazing things with multicopters. He's one of those guys who can do it all: hardware design, software, sensor analysis and business leadership. He is also one of the DIY Drones team members who appears to be able live without sleeping (or at least I have no other explanation how he can be so productive with a big day job and three small children).

You know him best here for the APM-compatible Multipilot32 autopilot board, which combines the APM IMU shield and ArduCopter code with a 32-bit ARM processor. It's a great port and a bridge to the 32-bit world for those who want that now.

Home: I live in Italy in Calcio in the province of Bergamo, 60 km from Milan, with my wife Elisa and my 3 children: Federico, who is 4 years old, Francesco is 2 and a half and little Sofia is just 1.

DIY Drones role: In the project I worked on the development of 32-bit cpu board, in particular on Multipilot32, a board with same shape and pinout of APM but with STM32 micro controller instead of AVR

I have been personally involved multipilot32 of the electronic design of the card, porting and integration of APM librarys on STM32 and porting the ArducopterNG and now Arducopter 2 firmware.

In the most recent versions of the software, I implemented the management protocol that allows PPMSUM on a single strand of up to 12 channels and a Arducopter mixertable for that.

Day Job: CEO of Laser Navigation, which develops 3D GIS applications for command and control center for operational safety and emergency fleets of ambulances and police. The company was started by my father, but due to his untimely death in a plane crash in 2004, I became CEO.

Prior to that, I served as head research and development and over time I got to deal with several projects in electronics and computing. I worked on the development of electronic satellite tracking, remote control and metering systems, video compression H.264 format. I developed a cartographic system in 2D and 3D long before Google developed Google Earth.  Between 2000 and 2004 I also worked on systems for automated trading systems creating a platform called Zeus.

Background: My experience in electronics and software start in 1982, my first computer course I did at the age 'of 8 years. was my first computer the VIC 20, then the Commodore 64, Amiga 1000 before moving to the PC and just recently in the last 5 years I bought my first Mac which made me very happy.

When I was 10 years old I programmed in Basic and at 12 developing the first computer course for my classmates. I learned English by reading the manuals of the Amiga and C64, which were available only in English.

At 13, I developed my first program on behalf of the company my father used to manage safety system for security of mountain roads . The program was entirely written in Amiga Basic:) At age 14 I learned to program in C and bought the famous Bible of the 'C', by Kernig and Ritchie:)

Since then, it was love forever ... ..my first software development was a GIS for the control of trucks fleet by GPS systems. The GPS was in its early stage Garmin receivers were used the first single-channel scanning and society 'my father realized the first satellite alarm system with GPS Garmin, a Motorola 68HC11 CPU and  Hacked Mitsubishi Etacs cellular phone.

My role was to develop software for the operations center, the first version of the software ran in DOS on a graphics card TSENG4000, I studied the register of the board, and developed a system capable of loading maps in PCX format and display the position of the vehicles carrying the first tracker made by my company.

At 16 I developed my first micro-processor board. My first microprocessor was the Siemens 80c166, a beautiful 16-bit micro  C program development systems Keil. The code was loaded on a epprom and every time I had to delete the program and reload a new one had to put under UV EPROM ereaser  and then proceed to reload. Flash memory did not yet exist :) All this I did during summer vacation and even during the school if the company needed my help.

After high school, I went to university to study Electronics Engineering, but unfortunately the things I was going to study already knew. So then switched to of philosophy, something I had fallen in love with during high school and which helped me a lot in certain moments of my life. My favorite philosophers are  Nietzche and Hegel.

Interests: I learned to fly sailplanes at 16 years old and flew them for about 10 years. Then I switched to sailboats and now I have a boat licence and like a lot going in to sea with my friends with sailboat :)

--Electric cars (I have a Toyota Prius)

--Green energy:  we are  working on a stirling motor in our lab.

--Opensource project and community: I support with the openstreet map community and some other linux projects.