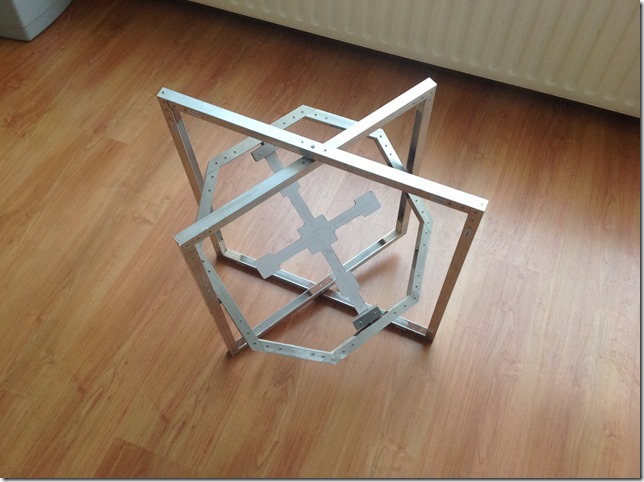 This is a tryout prototype of a multirotor testing device. Someone else built it for me actually who normally works with doors and heavier stuff, so it got bulky in the end and the rings gain too much momentum to be anything comparable to a multirotor this size. All connection points are regular bearings: inner ring is roll, second ring is pitch and third ring is yaw. The outer ring is support and should be mounted upright.

This is not shockingly new, the dragonfly indiegogo project used a tether for their testing, as seen in this video:

This model is intended to be used for testing controller boards with motors that you'd typically put on miniquads and 5x3 props. So thrust is a bit tougher. Some improvements that need to be made are swapping the alu material for carbon and ideally making the rings round with the edge facing the direction of travel (not flat as seen here) to reduce wind drag. A slightly better method of mounting the rings is for the inner ring to rotate around the Z axis. In the current construction method, if the vehicle has some angle in either pitch or roll, the yawing forces are reduced. Such an inner rotating ring is a lot more complex to construct, so that's probably not going to happen.

Such a device offers the following benefits:

In the next prototype I intend to use a square outer support and mount this on a flexible base with 5 pressure sensors at each quadrant and one below. The generated pressure is the force the quad generates in that direction, which through a script can be translated in acceleration and eventually velocity. The acceleration and speed data with attitude can then be sent to a flight simulator to be able to test the behavior of the controller in a simulated environment and the GPS+air pressure data needs to be overridden in the controller through telemetry. The idea is to reduce the complexity of a HITL simulation, so you don't need to simulate the complex action of the props anymore and you can use a very simple UFO aircraft to test the navigation code and performance.

I can share design files with people who want to collaborate on this.