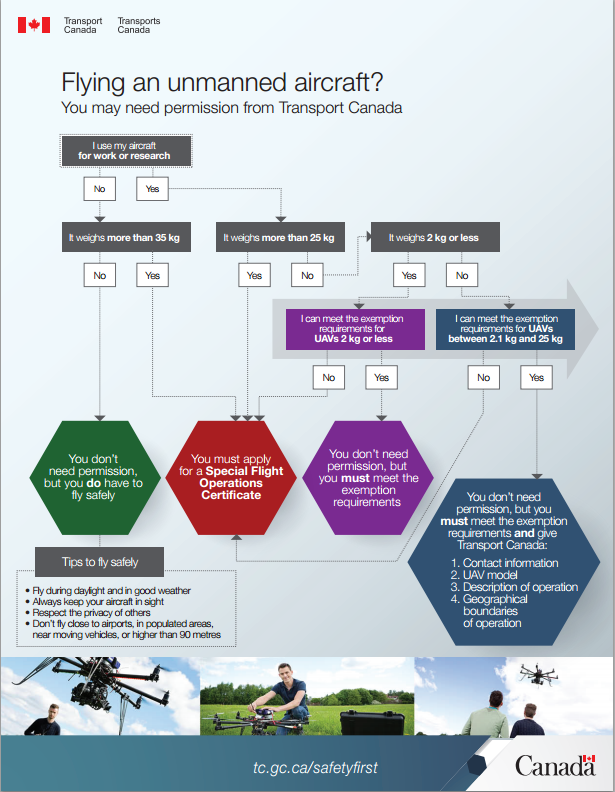 Well, the moment we have all been waiting for in Canada is finally here.  Transport Canada has published the new UAV regulations.  It is important to understand that these regulations effectively come in 2 parts.  Basically, you have one set of regulations for UAV's less than 25kg and for simple operations.  Then another set for UAV's larger than 25kg and/or complicated operations.  Then, within those two groups, there are more groups.  For the first, it's broken down into <2kg class, and 2<>25kg class.

The rules allow quite free operation of <2kg UAV's.  In a nutshell, you have to not be stupid, and fly safely.  You can't be drunk.  Know how to fly.  Have a plan.  And remain at least 30m away from people and things not involved in the operation.

For UAV's less than 25kg, there are a few additional, reasonable additions.  You must have a fire extinguisher, and remain 150m away from people and things not involved. The only question I have is, what does it mean for a building to "be involved in the operation"?  If I am taking photo/video of a building, does that mean it's involved?  I would assume so.  But, what about neighboring buildings?  Are they involved?  Because, it is uncommon to have solitary buildings 150m away from any other buildings. If this rule is rigidly applied, then it means you can pretty much only fly larger craft in remote areas.

Now, for UAV's over 25kg and/or operations not meeting these simple rules, there is a much more complicated document which applies:

I've skimmed through this, and it appears to be similarly reasonable.  There are various levels of permissions, etc.  too much to get into in detail here.