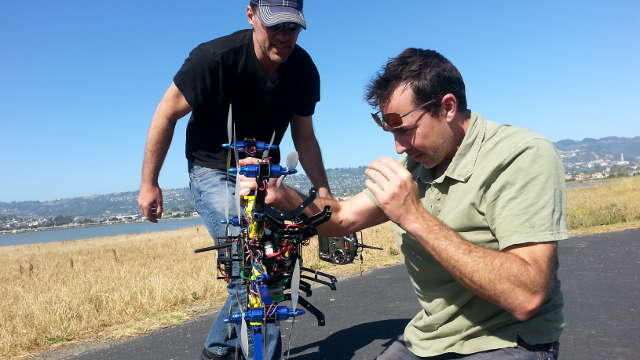 John Cherbini and Joshua Ott of 3D Robotics, setting up a thermal imaging camera for infrared shots of a field at the Berkeley Marina. Photo by Aarti Shahani

It appears that “drones” are here to stay. And Silicon Valley drone makers are going beyond military and spy applications, creating new environmental uses for unmanned aerial vehicles.

On Friday afternoons, you’ll usually find Chris Anderson out by the Berkeley Marina, tinkering with his squadron of drones. Looking up at the sky as one of his creations buzzes about, he can’t help blurting out, "So that’s just freakin’ cool, right?"

For Anderson, this is serious stuff. He quit his job as editor-in-chief of Wired Magazine to build 3D Robotics. The do-it-yourself drone company based in San Diego, won’t do military projects. That's part of a compact it has with about 40 thousand developers in its online community.

A few of them are here today, testing a 2-pound fixed-wing airplane that’s carrying a pocket-sized near-infrared camera, which is nothing more than a regular point-and-shoot model, with the plastic filter popped off.

"Our eyes are like the worst eyes in the animal kingdom,” Anderson says. “The cameras have been sort of crippled, to resemble the human eye. So we ‘un-cripple’ these cameras, to see the world the way an insect would see it."

This mini-airplane with a 2-and-half foot wingspan is different from conventional remote-controlled planes because it’s flying without a human operator. It’s following GPS coordinates plugged in before take-off. Other drones track moving objects on the ground using sensors.

"The more autonomous, the more drone-like they are," Anderson says.

The drone darts back and forth in a lawnmower pattern, 150 feet above the grass. It’s reporting its position to a laptop, and snapping pictures to stitch together a high-resolution map of the marina.

That image may not be something the world desperately needs but Anderson says farmers could use this kind of data gathering and image processing for crop surveys, to figure out what plants need water.

"A healthy plant will absorb the red light, but reflect the infrared,” he explains. “But as chlorophyll is damaged, it'll start to reflect the red as well. So the ratio of the infrared and the red tells you the health of the plant."