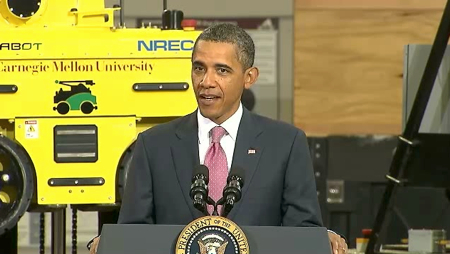 In a visit today to Carnegie Mellon University's National Robotics Engineering Center, Obama launched the Advanced Manufacturing Partnership, a national effort to bring together industry, universities, and government to invest in emerging technologies that can improve manufacturing and create new businesses and jobs.

Robots are a big part of this effort. The administration's new National Robotics Initiative seeks to advance "next generation robotics." The focus is on robots that can work closely with humans—helping factory workers, healthcare providers, soldiers, surgeons, and astronauts to carry out tasks.

"You might not know this but one of my responsibilities as commander-in-chief is to keep an eye on robots," Obama quipped at the beginning of his speech. "And I'm pleased to report that the robots you manufacture here seem peaceful. At least for now."

The goal of the National Robotics Initiative is to accelerate the development and use of robots in the United States that work beside, or cooperatively with, people. Innovative robotics research and applications emphasizing the realization of such co-robots acting in direct support of and in a symbiotic relationship with human partners is supported by multiple agencies of the federal government including the National Science Foundation (NSF), the National Aeronautics and Space Administration (NASA), the National Institutes of Health (NIH), and the U.S. Department of Agriculture (USDA). The purpose of this program is the development of this next generation of robotics, to advance the capability and usability of such systems and artifacts, and to encourage existing and new communities to focus on innovative application areas. It will address the entire life cycle from fundamental research and development to industry  manufacturing and deployment.  Methods for the establishment and infusion of robotics in educational curricula and research to gain a better understanding of the long term social, behavioral and economic implications of co-robots across all areas of human activity are important parts of this initiative.  Collaboration between academic, industry, non-profit and other organizations is strongly encouraged to establish better linkages between fundamental science and technology development, deployment and use.

Two classes of proposals will be considered in response to this solicitation: