One if by land, two if by sea. I know everyone on here is totally stoked about air vehicles, and I admit they are way cooler. I'm not convinced that the air machines will really change society because they don't have the possibility of inexpensive persistence. Aircraft are such high energy machines; high energy, high wear parts. One major airline trip and you're made an enormous carbon footprint. A cruise isn't far off, but at least boats can float. We didn't send hexapods to Mars. Granted we did FLY our robots there on a really big rocket, once they got there, they were terrestrial. That's why solar power is so crucial for robotics. Solar power is pretty cheap as far as robot parts go, and very do-able, especially for intermittent land use. With the announcement of the 2014 Volvo with autopilot, I think it is a matter of time until autopilots will begin to be integrated into vehicles like cruise control. Then it doesn't really matter if we're even in the car. I'll just send an old golf cart to the post office for me. I can put a camera and a note on it (surely they'll be used to this by then?). Drive though food by proxy, please insert food into empty car, I'm in the garage. I know the "burrito bomber" is a fantastic idea, but I think pizza hut is going to prefer tele-presence in an empty vehicle, that doesn't want a tip to a teenage driver. Even though Chris Anderson is one of my heroes, I think "my platform," the play-ground vehicle, is going to change the world. (Ok, just kidding, I'm not changing the world). Who cares about landmines if you can send a fleet of kid's toys and powerwheels to clear the roads; they're disposable. UPS is going to want land vehicles for logistics even if they can't travel as the crow flies. My robot can carry a 50lb kid (it can probably carry me) who can then pan and tilt a hero camera. That's a pretty useful payload. I'd like it if it could just follow me to school and carry my books and crap for me.

This project has been on the back burner for most of this semester. I was weak and spent the better part of a Tuesday where I was not teaching or taking class working on the "robot". Where I had spent time agonizing over neatly soldered and heat-shrink wrapped connections I tore through the project like a jones-ing drug addict. I tore off insulation with my teeth twisted wires and slapped them into electrical tape. Before I had to pick up the kids I had debugged the code down to its most basic elements to the point where my daughter could ride it when she got home. Forwards and backwards and she did the steering. That's it,no sensors, but it finally worked! I wired in a toy-like epoxy-sealed charge controller as well. In the frenzy I lost the old foot pedal I was going to use for a brake. I scoured the house for so many different parts that I can now picture the pedal in every box of junk parts and bits I own.

My daughter had a blast, and the thing screams. It is simply too fast for my 2 year old. I hope to add a turtle/rabbit toggle switch at some point. I have a video but after getting trolled on YouTube, I don't really want to put any thing video on the internet for a while. They were like, "great video, but your voice makes me want to kill myself," to which I felt an odd and kindred empathy and wondered how I survived puberty. So for the public health; it's all stills. I don't mind posting pictures of my ghetto-spit-and-tape robot though. I got a little burned out on the fabrication side of things. I don't have the disposable income for a drill press, welder or a long list of other toys. 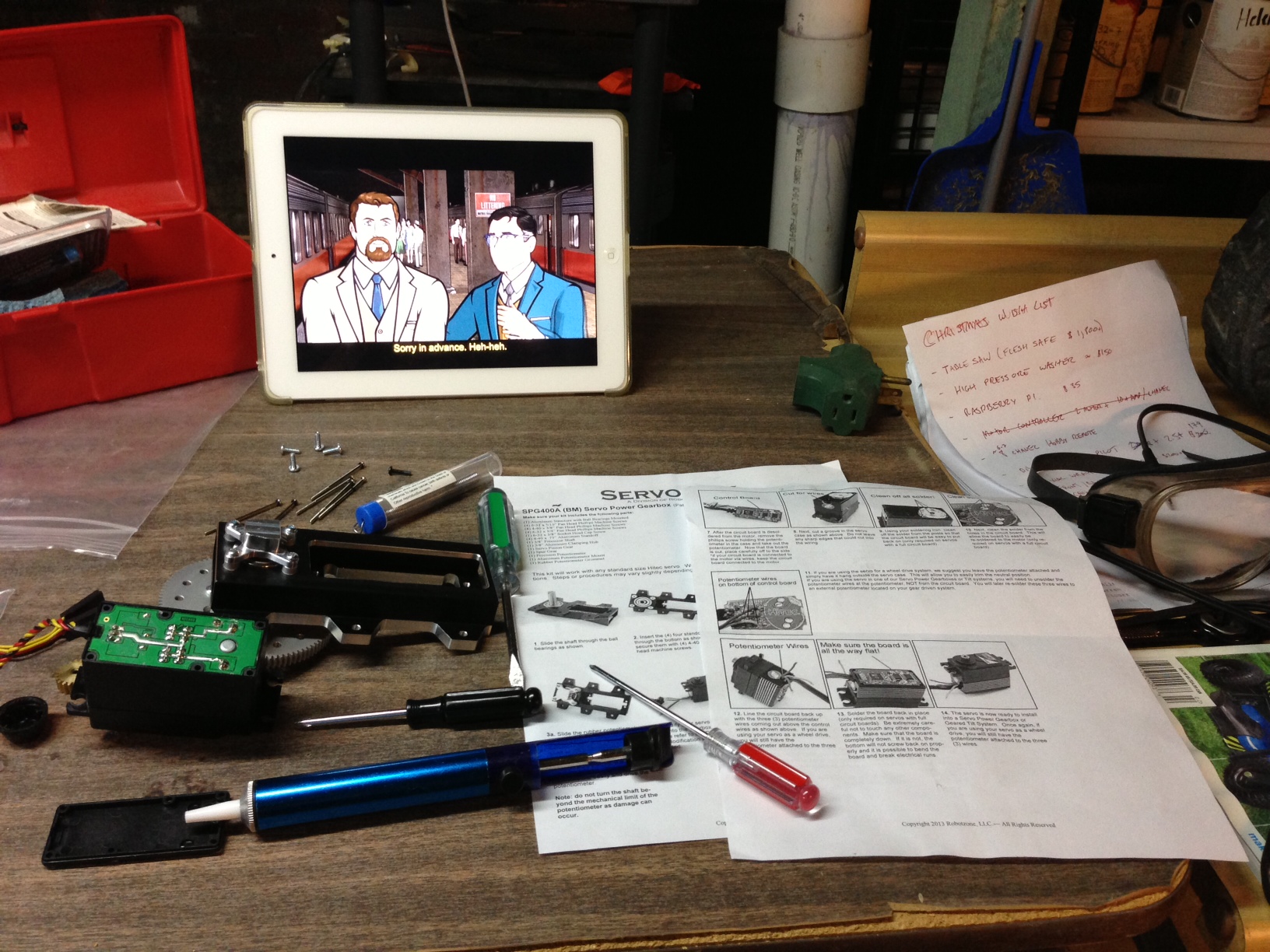 I finally broke down for some more parts though. The grand plan is to get the "tractor" running on par with any other normal remote control toy and upgrade to the diydrone.com autopilot. I'm still working on the steering portion. I looked on eBay for linear actuators with potentiometers but they're out of my price range or look like junk. There also isn't any place to put it that won't create a pinch hazard. I went to servocity.com (holy crap actuators were $400 bucks) and bought one of their larger servo gearboxes because folks on modifiedpowerwheels.com have had reasonable success with them. My robot is very small (1 small person vs. 2+ slightly older and larger) compared to the most easily modified vehicles (apparently there is a metal jeep that is amazing). The tractor doesn't have a trunk or much of an engine compartment. I think I may even be able to mount this servo gear box such that I can then put some plexi-glass over it out of harm's way.

I also bought a new axle which I plan on threading to make a complete disassembly easier (and repeatable without destroying the disposable hub clips). The old one is too short after adding the 2nd motor, 2 wheel drive. The next step is going to require a nearly complete tear down. At one point I was excited about the prospect of spraying it down with truck bed liner to give it a newer/rugged look. Then I went to duct-tape for structural support and aesthetics went out the window for a while.

A friend of mine and I are supposed to hang out and work together, but neither of us have been able to find the time. He has a raspberry pi while I'm working with an arduino. The prices have come down on the pi's so I've ordered one. This is in part because I only got to hold his while it was off. I don't really understand how to make the transition from the micro-controller to the RC radio. It might be easier to just let the raspberry onto my router and control it over http. The pi has USB, so I could just plug the arduino into it and not bother with the Ethernet shield... or use both. In any case, if I can get the pi to do some computer vision I'll be really excited. I want this thing to mow the yard, rake the leaves and shovel the snow, like yesterday. And tell me better jokes than siri. The dishwasher is a malapropos, it doesn't do sh!t.

The sun came out today so I checked the battery before and after dropping off the kids and was happy to see the charger was working. I suspect that the 10w panel might be self-sufficient in the summer. When the robot is on it should be using the arduino, the raspberry and the motor controller. The arduino may use about ~.5watts. The highest estimate I found was 35mA, so .035A x 12v = .42 watts. The raspberry should use about 3.5 watts. I don't know what the speed controller uses. The motors however use rather a lot. WV gets about 3.5 average sun hours a day provided you're on the south side of a mountain. I'm close to the top of a northern hill. Conservatively that would be about 35w/hrs. a day. The two components I can calculate are already too hungry to make it 24 hours. The summer is different though and I'm optimistic. I am hoping that I can use the panel to position the vehicle to track the sun. I think this will need either another panel or a compass. I don't want to buy a compass, gps etc., because the autopilot sold here has so many sensors for less than I could buy them individually. I have no idea how to implement the heliostat, but a 14 year old made an instructable about it and that gives me some hope. He used two photo resistors separated by a fin of cardboard. I have an old solar laptop charger that just uses monocrystaline PV's and gives a digital readout in percentages so there has to be a way. Practically speaking I'm not sure how to take the charge controller's output to the arduino.

I went to a first robotics group meeting and was really excited to see robots throw Frisbees. I was also a little bumbed out because it was pretty obvious that they were working on a budget vastly different from that of an adjunct professor and graduate student. I grilled every high school student I could find. I learned that they are working at a fairly abstracted level with expensive components and software. I also learned that I could attach gears to potentiometers. I had never thought of that.

All the while, I'm cramming all sorts of crap about the presidency into my head. I do not care about the presidency as much as I do about my robot. I love comparative policy, policy analysis, institutionalism and a lot about political science, but I don't care a whole lot about this particular n = 44 domain. In an effort to push myself to program though, I'm trying to learn some python. Maybe I can learn something interesting about executive orders and text mining.