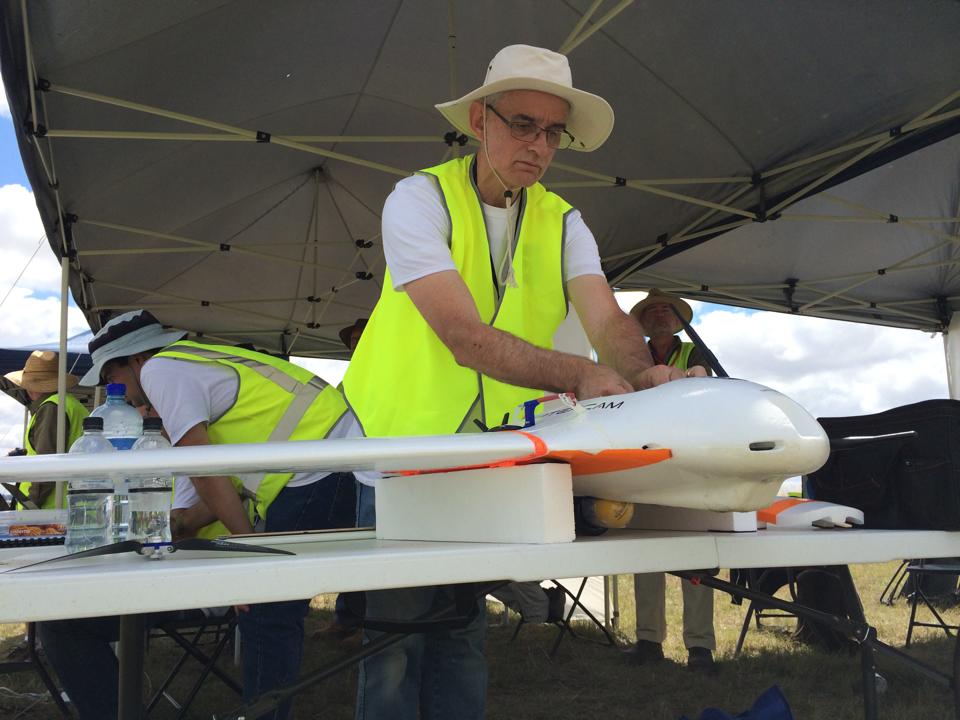 Today Perth UAV flew at the 2014 UAV Outback Challenge.  Out of the 20 competitors, 15 were cleared to fly.  1 withdrew, 1 postponed, 2 crashed, 3 made it safely around the course and  there are 8 more teams yet to fly over the next two days.

Setup time started really badly when our normally completely reliable RFD900, that had worked on all previous occasions over hundreds of flights, failed to connect.  We swapped to a spare and it came up after much running around and fault finding.

Then our WiFi failed as the ethernet port of the WiFi module came off in my hand!. This left us just with our 4G connection to get thumbnails from the onboard recognition computer down to the ground.

We finally had everything up and running but were told to shut down as about 20 gliders launched.  We ended up restarting everything three or four times as hold were put on and cancelled.

After we got the go-ahead, the Pixhawk executed a perfect automatic launch and flew to height of 200m to start the course.  At this point our on-board recognition computer running Tridge's recog code stopped working leaving us with no recognition!  Fortunately we had a second backup recogniton option that we never expected to use.  Our software genius who designed the imaging system put in a module on the smart camera to upload photos over 4G to a cloud server running the same recognition software that was running on the onboard computer.

With that, we finished the scan of the search area in 30 minutes and spent a further 25 minutes loitering around in the search area waiting for images to upload and be recognised. The problem was that the images uploaded slowly, with only about 30% of the images uploaded within the competition time.  With a 60 minute time limit almost over, we successfuly executed an auto landing at the 59th minute.

We were given 15 minutes to pack up, but shortly after our competition was over, the cloud recognition server successful identified Joe!  Unfortunately it was too late for us, as our time was up

It's a privilage to be one of the few teams to ever fly the course and return without crashing and even take a (belated) image of Joe.  We are very happy with the way the team performed through all the challenges we had and wish the remaining teams all the best for the next few days.