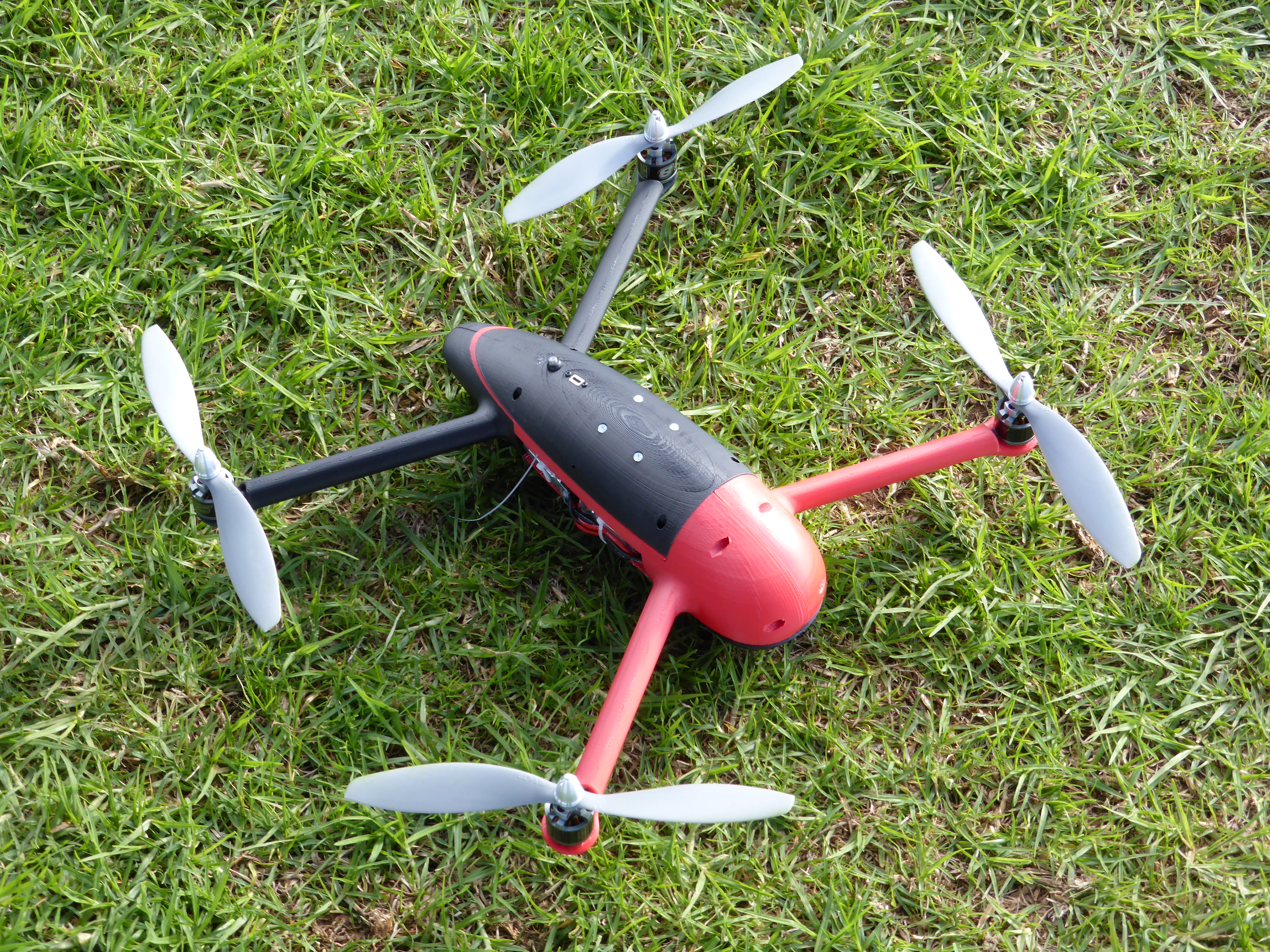 I thought I would share the copter I hoped/hope to fly at ACV this year. I wanted to try to see what speeds I could get from a quad. I also thought it would be interesting to see what I could to with a 3d printer. I have access to a Makerbot 2x and I was also adding a heated bed to a friends printer. So based on the maximum dimensions of the Makerbot I designed the quad you see above and rendered below. 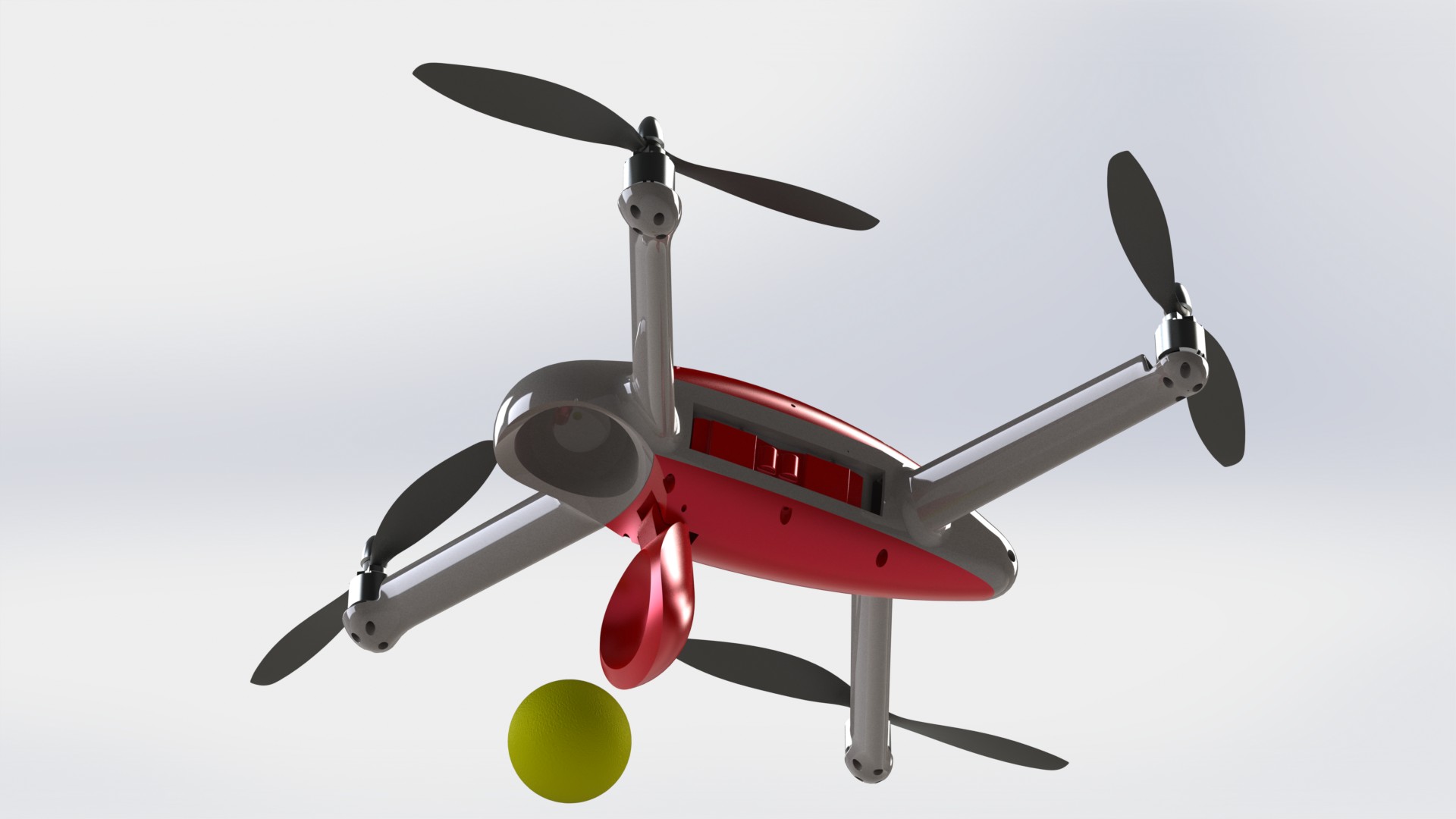 The quad consists of 4 arms with a semi aerodynamic cross section that is angled forward by 60 degrees. The round nose holds a tennis ball and the bottom swings open using a servo to drop the ball. The battery is held in the center of the frame and the 4 esc's are recessed into the side of the body to provide them with cooling without adding too much drag. The copter is held together using screws and nylock nuts that are pressed into the plastic.

I did some basic calculations to try to get an idea of what angle I was going to be able to sustain. My calculations suggested that I should be able to maintain 60 degrees if the air frame drag stops the copter from moving fast enough to reduce the lift of the props. I found I had to make some guesses about the air frame drag (I used coefficient of drag of a tennis ball as a starting point) and the area of the copter (I think this may have been a little low). In the end I concluded that without wind tunnel testing and a much better understanding of propeller aerodynamics I wasn't going to get too much out of the calculations.

What I did get was a reasonable estimate of the power I was going to need from each motor, 700 W total or 175 W per motor. This was well below the 285 W the NTM 28-26A 1200 kv motors are rated at. It also looks like it may be easier to get higher speeds as the weight of the copter increases. This is because the increased weight means the copter must hold a lower pitch angle at a given speed because of the increased lift required to stop the copter from loosing altitude. I limited my pitch angle to -60 degrees to ensure the copter didn't get too close to gimbal lock. The calculation of the airflow angle over the arms as speed increases and the copter pitches forward. What I found is the airflow becomes dominated y the forward airflow very quickly. In my case the airflow is only 3 degrees off the 60 degree angle of the arms at maximum speed. 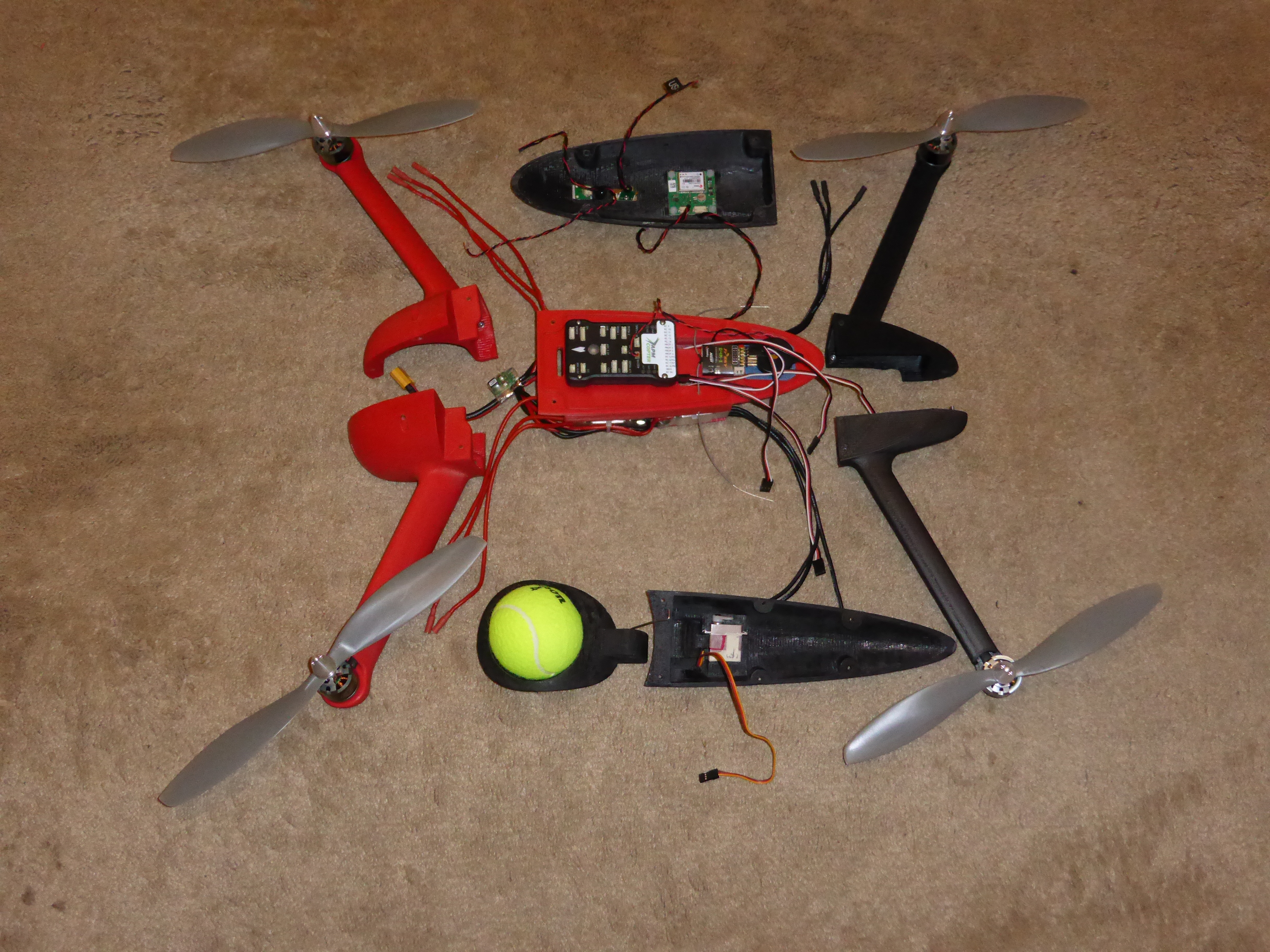 So I did an autotune and took the copter out to the local model club to see what I could do. I found the copter would accelerate very quickly and the frame was amazingly strong and ridged. While the flame wheel frame I tested the power train on would bend under full acceleration, the 3d printed frame was a rock. With the 45 degree maximum pids I couldn't take the throttle past about half way without climbing. So I checked over the logs for any obvious problems (other than the one I had) and increased the maximum angle to 60 degrees. I also found that I had to adjust the yaw pids to control the frame a high speeds because it wanted to turn the frame sideways to the airflow. This is a well known effect. Just shoot an arrow without feathers or fire a rocket without fins. I was able to adjust the yaw pids to keep the copter right where I wanted it in the following flight.

The following flight I was able to really wind it out. I was very happy with the performance of the copter. It wasn't getting up to the speeds I was hoping for but things were looking good. After about 3 minutes of high speed passes I saw a clear line of white smoke coming from the copter followed by...... unhappiness. The front left motor was burning hot and the smoke was the insulation on the winding's burning off. The logs showed that the front left motor was pegged during each high speed run and there was obviously a problem with it. The logs also showed maximum velocity of 107 km/h but it was happy sitting at 90 km/h even into a small head wind. The props / motor / battery combination would max out at 126 km/h on a normal plane.

So overall I was pretty happy with the performance. And I can say that a quad can be very effectively 3d printed provided the arms are designed to take advantage of the strengths of 3d printing. In this case each arm and body section attached to it was 70 g. The strength was high enough such that I couldn't break a arm by trying to bend it in my hands.

So now I need to work out if I can print a replacement before I fly to AVC. I need to print 6 parts, each taking approximately 12 hours. So each is an overnight print and I have 6 nights before I need to leave.... I may need to fly the Y6 :(

Things to remember. (this is a "note to self" but I thought I would share)

Always check the position of the bell on the motor shaft and adjust it to get the optimal location. This problem sounds like a bearing problem in flight. This is also a good time to ensure the grub screw is tightened properly.

After the first flight check the motor output of the autopilot at maximum throttle to see if any motor is consistently maxing out before others. This is the tell tail sign of a motor or esc problem and would have saved me here. I didn't look at this because all the motors were brand new.... bugger :)

Always check every screw and prop before the first flight. This is where little things can go wrong.

Yaw stability in a copter will take a big load of the yaw controller in a high speed copter.