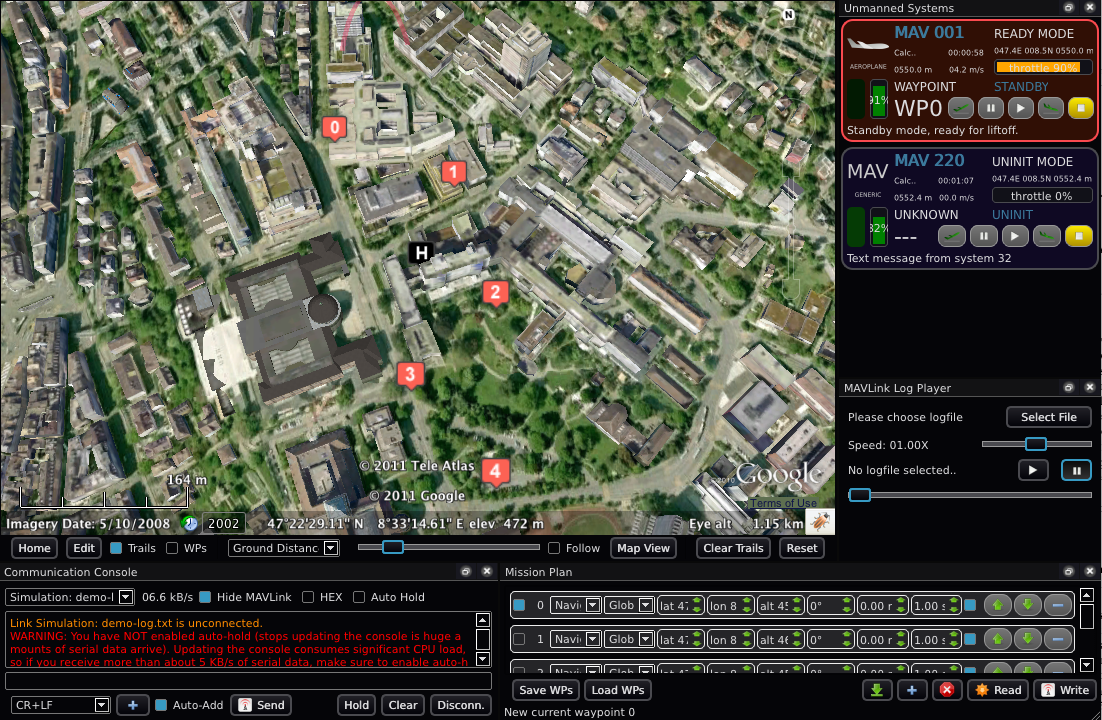 QGroundControl is currently improved on a daily basis along with the efforts to implement a common mission interface for ArduPilotMega and MAVLink. While this is work in progress, I'd like to share some impressions of the new features. Once the next APM version is released, a matching stable version of QGC will be released as well optimally supporting APM. The picture above shows the Google Earth mission interface on Mac OS X, which supports waypoint creation (double click) and dragging. The Windows version is lagging slightly behind: Waypoint visualization works, dragging not yet. I would like to particularly thank our restless beta testers, their excellent feature requests and bug reports really helped improving the usability.

Realtime Linechart Plot: Allows to log data to a CSV file (e.g. for Matlab) and to see how sensors and filters behave in realtime. It includes mean and variance values (second and third column) and you can freely set the window size for the calculation of mean and variance. 2D Map: Perfect for mission planning and computers without the processing power for Google Earth QGroundControl got now also persistent settings, which means that preferences are stored. Most of the widgets store the last configuration (e.g. which option you checked). You also can rename MAVs, e.g. MAV001 to ALPHA. You can even set QGroundControl to auto-connect your serial link with the last settings on startup. On the protocol side safety was improved by retransmitting lost packets, ensuring now that not a single parameter is lost.

QGroundControl can now also log MAVLink packets with timestamp and replay whole missions. It accepts binary logs (raw data from e.g. serial logs) as well. So you can now run a HIL simulation and view the output in realtime in QGroundControl, log it, send it to a friend or export the data to Matlab. The offline logfile analysis tool (not shown here) allows you also to print 2D plots or create PDF or PNG files from them. For the brave: There are daily experimental builds that work with the SVN version of APM. They are in general stable, but of course not as well tested as a full release version. The executables for Windows and Mac OS can be downloaded at:

Since this is still beta software, bug reports and feature requests are welcome: