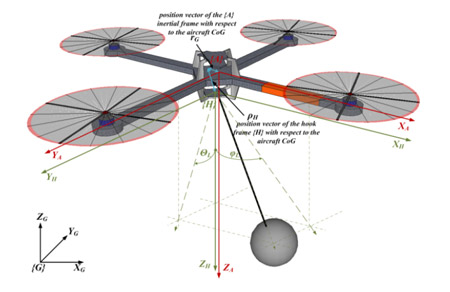 One of the ways in which robots are just starting to get really useful is with hauling aerial cargo. Last year, the optionally-manned KMAX made its first autonomous cargo delivery in Afghanistan, and since it can fly as many missions as you have fuel to keep it going, it's definitely a safer and more efficient way to get supplies to troops, especially in dangerous areas.

To move cargo around, helicopters (autonomous or otherwise) often carry stuff slung beneath them on long ropes, and as you can probably imagine, said cargo often ends up doing all sorts of swinging about, especially if the helicopter that's carrying it has to maneuver. Researchers from the University of New Mexico have been developing algorithms that allow robots to compensate for motion-induced swinging of suspended loads, and testing them out on real live quadrotors.

Essentially, what the quadrotor is doing here is dynamically adjusting its trajectory to damp out the swinging motion of its cargo (think tacos). It's sort of like an upside-down version of pendulum balancing, with maybe a little bit of this insane hinged stick balancing thrown in for good measure. Next, the researchers plan to see if they can get their algorithms to work on platforms that are less balanced (and more realistic), which (they say) should be "an important step towards developing the next generation of autonomous aerial vehicles."

Trajectory Generation for Swing-Free Maneuvers of a Quadrotor with Suspended Payload: A Dynamic Programming Approach, by Ivana Palunko, Rafael Fierro, and Patricio Cruz from the University of New Mexico, was presented last month at the 2012 IEEE International Conference on Robotics and Automation in St. Paul, Minn.