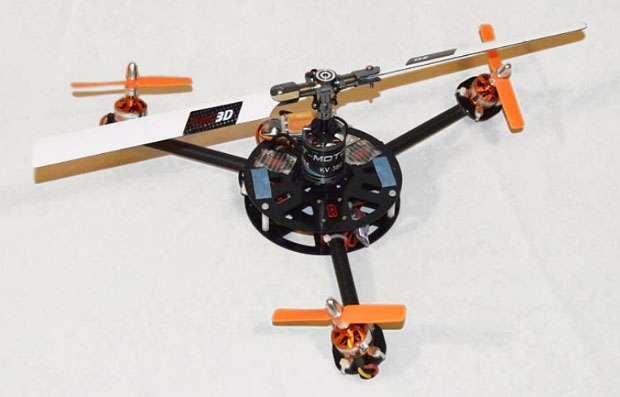 Evan Ackerman at IEEE Spectrum reports on new research that suggests that a large central rotor (like a helicopter) combined with with three smaller control rotors is a more effecient use of four motors than the conventional quadcopter configuration. They call it a "Triquad":

As cool as quadrotors are, in most cases they're simply not as good as helicopters. Because of the way they're designed (with four small rotors instead of one big one), they're less powerful, less efficient, and less maneuverable. The power and efficiency issues come from the fact that one big rotor generates more lift per aircraft footprint than four small rotors, and as for maneuverability, a helicopter that can alter rotor pitch instantly will always outmaneuver a quadrotor that can only control blade speed. Seriously, try doing this with a quadrotor.

So, the thing that quadrotors have going for them is that they're simple. Helicopters have complex main rotor heads, with shafts and bearings and linkages all over the place, while quadrotors just have four motors and that's it. The University of Queensland researchers came up with a "Y4" configuration that aims to take all the good bits of helicopters and make them as simple as quadrotors. I'm just going to start calling this new design a triquad. Keep in mind that this is still a quadrotor: it just had things shifted around a little bit.

Almost all of the triquad's lift comes from its big main fixed-pitch rotor, located at the center of the "Y" (pictured below). The three little fixed-pitch rotors in the "Y" configuration are angled (at a fixed 45 degrees) to provide counter-torque (which they do slightly more efficiently than a helicopter tail rotor) along with pitch and roll control. Here's how the control works: Crunching numbers suggested that the triquad would have an increase in performance (in terms of flight time) of about 25 percent over a standard quadrotor configuration. The researchers, being researchers, decided that the only fair way to test this hypothesis was through experimentation, so they built a triquad and a traditional quadrotor that were as identical as possible: They had the same mass, the same footprint, the same mass devoted to actuators, the same chassis, the same arms, the same batteries, and the same flight controller. The researchers explained that the standard "control" quadrotor had an optimized design, while the triquad was not optimized at all (because its design was constrained to keep it as similar as possible to the control quadrotor). This gave the control aircraft an advantage in power of about 9 percent.

Even with this disadvantage in power and a suboptimal design, the average current draw during hover was over 15 percent higher for the control quad, which translates into a 15 percent increase in flight time for the triquad design. The researchers think that with some tweaking, that theoretically calculated 25 percent increase should be achievable.

"Towards a More Efficient Quadrotor Configuration," by Scott Driessens andPaul E. I. Pounds from the University of Queensland, was presented last week at IROS 2013 in Tokyo, Japan.