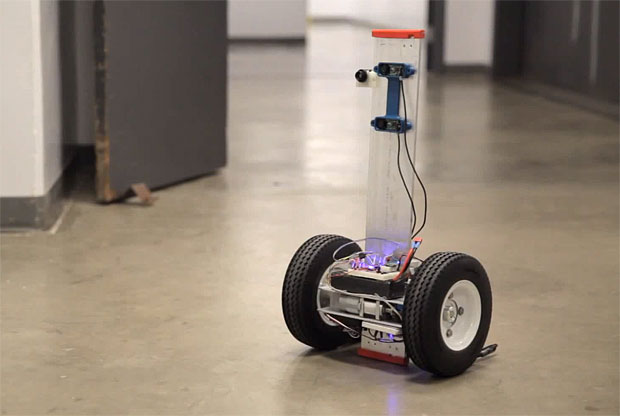 Posted 6 Jun 2013 | 14:48 GMT
http://spectrum.ieee.org/automaton/robotics/industrial-robots/ucsd-firefighting-robot-3d-thermal-imaging
We hear about lots of robots that could potentially be used for "search and rescue" or "disaster relief," because that's kind of what you say when you've made a robot that doesn't have a commercial or military application but you still need to come up with some task that it might be useful for. It's much rarer that we see these robots actually performing search and rescue or disaster relief tasks, which is why it's especially nice to see this firefighting robot from UCSD doing something that firefighters would find immediately useful.

The UCSD robot is called FFR for "firefighting robot," although FLR for "firelocating robot" might be more technically correct. The robot uses a stereo camera and a thermal camera to generate 3D pointclouds with thermal overlays, allowing the robot to autonomously generate maps showing hot spots and humans even through smoke. The sensor hardware on board the robots doesn't look especially complex, meaning that the 'bots might ultimately become inexpensive (and replaceable) enough to deploy in swarms. So, instead of running around burning buildings looking for people, firefighters can just deploy a bunch of robots first, and rapidly build up a thermal map telling them where to go.

Incidentally, that nifty stair climbing system is something we first wrote about back in 2009, and it's great to see that it's been turned into something useful. Now, if they'd just give iFling some water balloons, it really could be a firefighting robot.