The picture to the right is a small photovoltaic charge controller in the tractor (right). It was made by lyncom around 2001 a company possibly purchased by Kyocera.  It is pretty much a toy, but the resin encapsulation is similar to higher end charge controllers such as USA made Flexcharge and should weather well (better than

the rest of MY shoddy fabrication skills!).  The reverse flow blocking diode an LED so it lets you know if it is working.  Neither Flexcharge nor this lyncom support charging lithium ion batteries (like the Sabretooth ESC I'm using says it d

oes).  The lyncom has done a fine job boosting the battery voltage in early spring sun for even a short period of time.
The panel is a direct from China eBay special, 10 watt polycrystalline el-cheap-o. I dremmelled out the junction box a little.

I also made some progress with a rickety makeshift pedal switch (below).  It probably won't last long, but it works and will be covered by the plastic pedal. The tractor is a basket case right now, which is good until the end of the semester.  I'm so obsessed with robots right now that I'm questioning my life decisions.  I feel like this is exactly what was happening when I built my first computer.  That gave me valuable skills, robots might be more important than my Ph.D.  If I was a better coder I could bring some of these machine learning ideas into political science.  I'm not the next Steve Wozniak, or Jobs (since we're both ENTPs).  I'm happiest right now when I'm contributing to this corpus, or body of the mind. 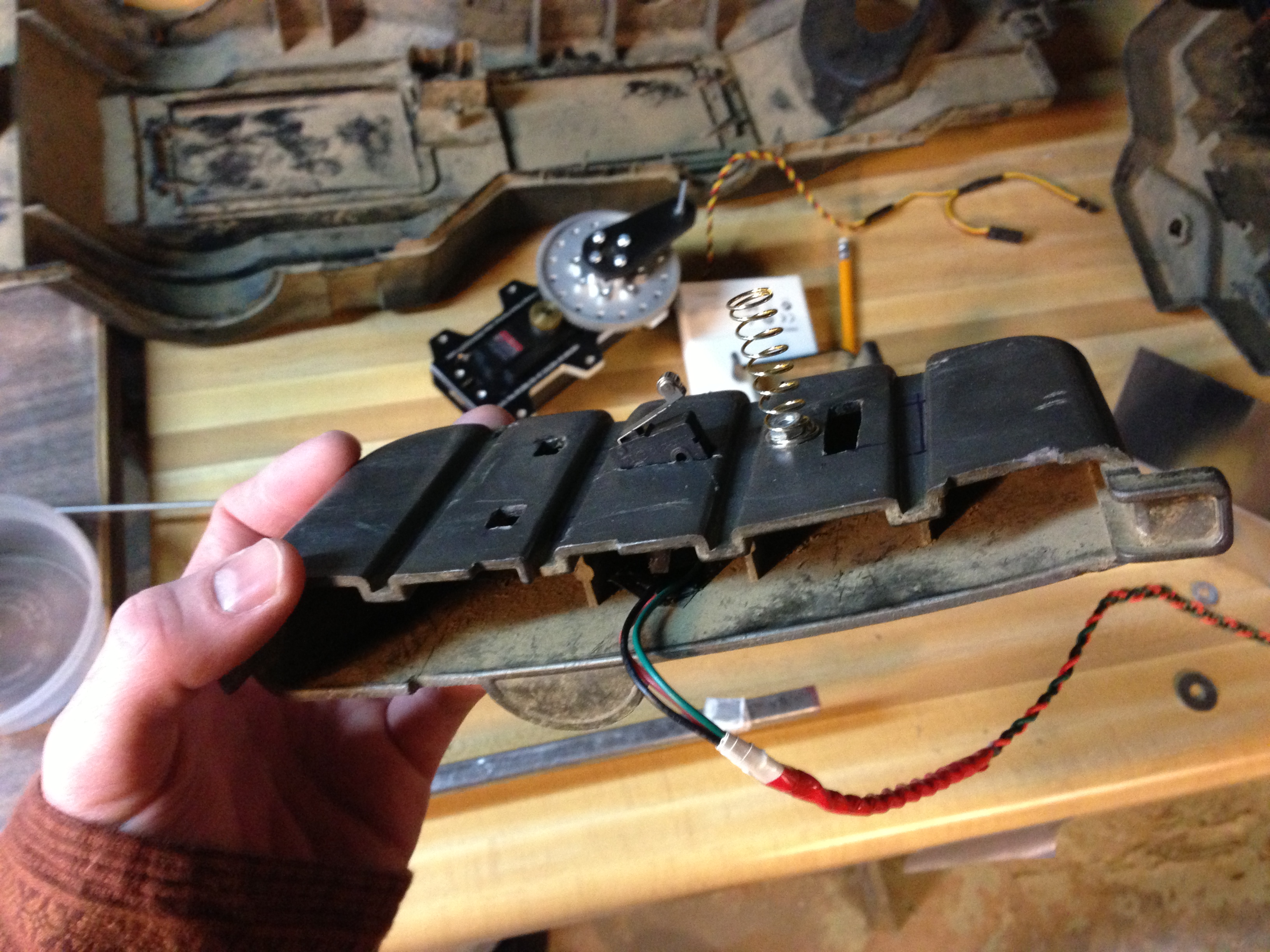 Another small victory, I was able to VNC from VMware into the raspberri pi with X11VNC like I had hoped, but I didn't make a startup script in the init.d like I need to.  I did not get distracted by the new Kali linux, and definitely not distracted by an Rpi asterisk.  I am completely smitten with the idea of Interactive Voice Response working on the pi and having my robot talk to me.  I love the Human Computer Interaction (HCI) feature of having the Rpi speak its IP address on the asterisk iso.  I got the CMU Festival package running and played with it on the command line.  It sounded a little better than my Amiga 500 did when I was 8. I got a little distracted.

I remember reading that the old body style Prius (the one that looks like an Echo) had 244 D cell Ni-Cad batteries.  A friend of mine made a laptop battery from 10 Ni-Cads in battery packs taped together (10x1.2=12).  I'm guessing that the 18650's are what are in the new Tesla cars now. I have recently taken apart a few laptop batteries apart to feed my flashlights the 18650 cells I find inside.  It wasn't until reading lady ada's battery tutorial that I got a sense of exactly how volatile the unprotected cells can be. I ordered $20 bucks worth, 10 protected cells 3.6 amp/hour @ 3.7 volts from an ebay importer to tinker with (7.2amps @ 14.4 volts as a pack).  The price per amp is close to the retail I paid for the (7.5 amp/hour @12v) Sealed Lead Acid at Wall-Mart.

The biggest problem is still figuring out how to mount the servo to the irregularly shaped chassis of the peg perego.  Everything is waiting for me to solve this problem.  I had an epiphany in bed one morning and had to draw it (below).  I haven't worked out the details, but at least I have a plan.  To compound the problem, I also ordered pneumatic tires.  I felt pretty inspired after seeing what saltydog (the url domain goes to the famous cafe which is interesting) had done at modified powerwheels.  I really admire the simplicity of his approach; put a drill in it, and move the drill's high quality switch to the pedal.

This provoked me to contemplate the steering linkages which may need to be replaced if the . The tie rods are already very difficult to turn and the wheel provided a lot of leverage.  The rubber tires will just make them more difficult.I may need to remove the existing plastic and replace it with 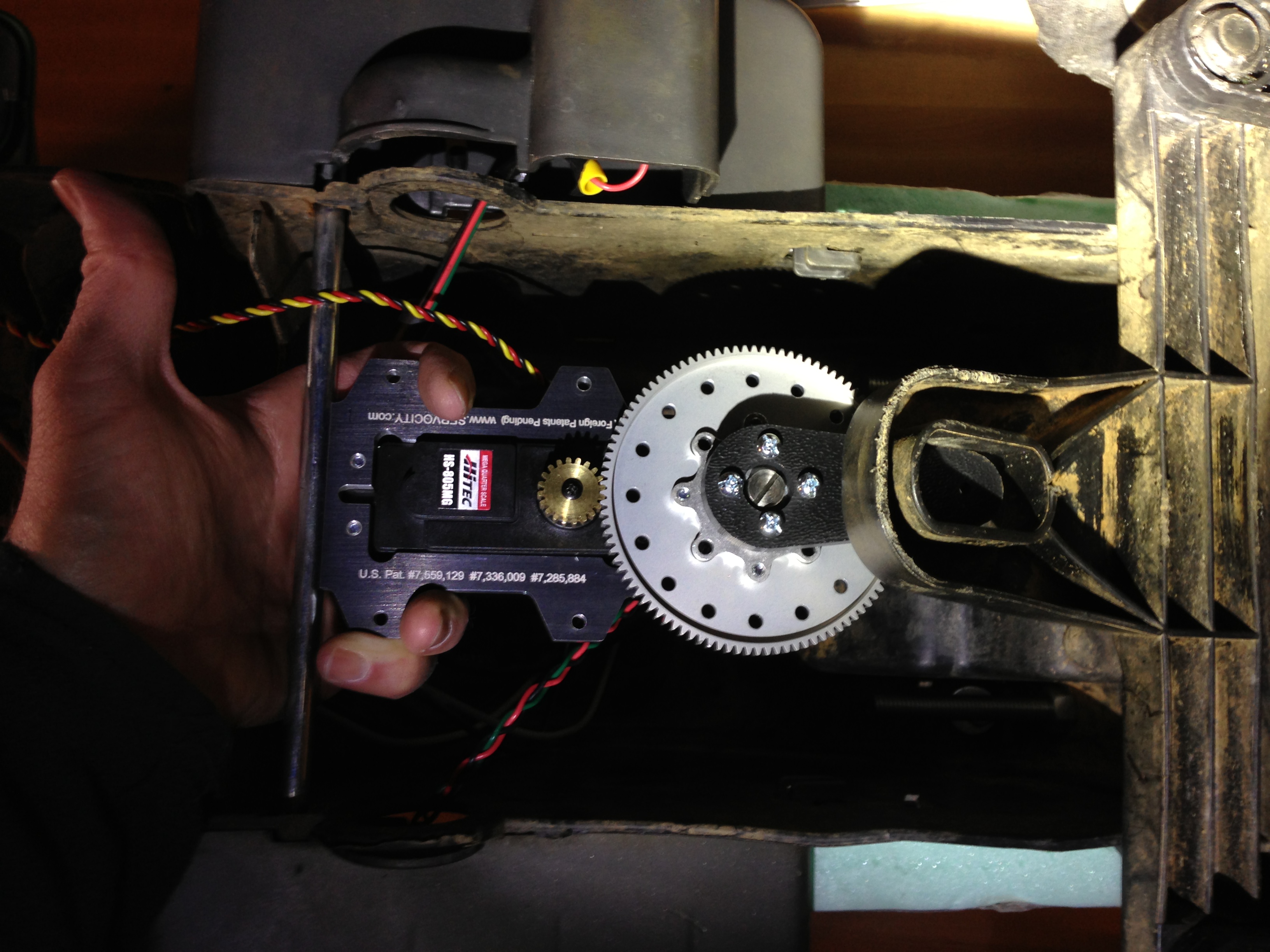 some sort of ball bearing joint or even completely new spindles (a new word I've learned).  Steering is just fascinating and I have been having a very difficult time visualizing this problem.

I searched for Peg Perego and 3D printing and found another "powerwheel" project.  This approach felt much more steeped Mechanical Engineering than garage mechanic.  I noticed he was using Google sketchup so I downloaded google sketchup and made my first attempt at a 3D drawing.  I drew the pentagonal shaped final drive on the gear box, which if I could print and add to thingiverse, 3d warehouse or the like would solve a very common problem for folks building rovers from kids-ride-on-toys.  I may be able to use an ABS printer in the near future, so I'll need to improve my sketches considerably. 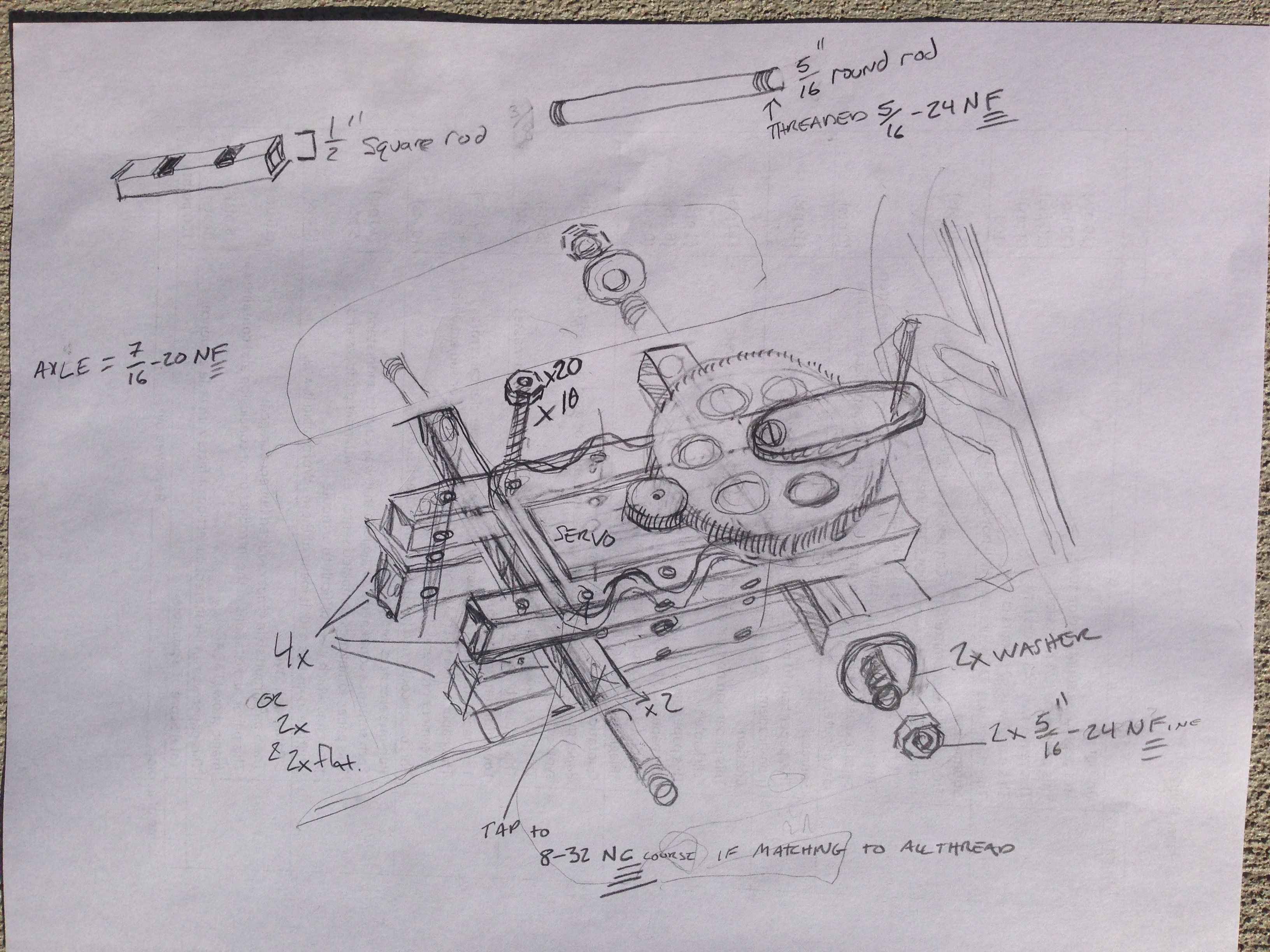 I hope my user generated content is of some value to other makers out there, and Mr. Anderson.  I appreciate diydrones' hospitality, I'm not sure if squatting here, or for adopting me.  I realize lots of the developers are into flying, but it's taken me a while to do my own orienteering.  The margin for error is simply too thin for me to do the kind of tinkering I like to do at those speeds.  The recent UAV safety hortatory was certainly sobering.