I have flight tested this algorithm multiple times on a low-resource autopilot embarked on a fixed-wing UAV (see figure below). In this blog post, I want to share my approach to implementing this algorithm. I cannot claim any academic novelty. However, I hope to make this simple and effective algorithm more accessible to other researchers/hobbyists. In the remainder of this post, I will provide a high-level view of the algorithm. I will also show some flight test results. If the reader wants a more mathematical treatment of the implementation, the reader is referred to the attached PDF. Thus, it is necessary to convert the desired velocity and the desired acceleration into a desired bank angle. We use a two-step conversion. 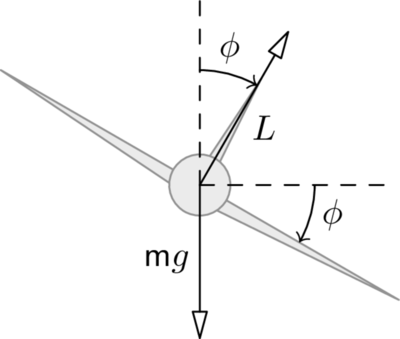 Having described basic loiter circle tracking, we are ready to move on to waypoint navigation. The waypoint navigation routine is actually loitering in disguise: the routine positions loiter circles so that the vehicle smoothly intersects each waypoint in succession. The positioning algorithm is shown in the figure below.  The positions of the previous waypoint, current waypoint, and next waypoint are denoted by A, B, and C, respectively. The center point lies along the bisector of angle ABC. The loiter radius sets the distance between the center point and the current waypoint. Having determined the loiter center, the next step is to determine the sign of the circulation constant. If C is to the left of the line AB, then the circulation is counter-clockwise (<0). If C is to the right the line AB, then the circulation is clockwise (>0). A nice feature of the positioning routine is that it can work with only two waypoints. The waypoints are stored in a circularly linked list. Hence, the "next" waypoint and the "previous" waypoint can point to the same waypoint.

Next, we describe the algorithm that governs how the aircraft switches from one waypoint to the next.

Now, the straightforward approach is to immediately switch from using LA to LB. However, this approach will change the guidance vector in an abrupt manner. To achieve a smooth transition between waypoints, the switch from LA to LB occurs when the velocity vectors from both loiter circles are pointing in roughly the same direction.  A smooth transition protects the low-level control system from large changes in the input command. 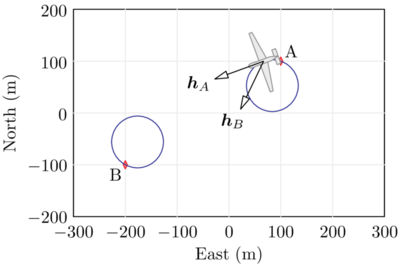 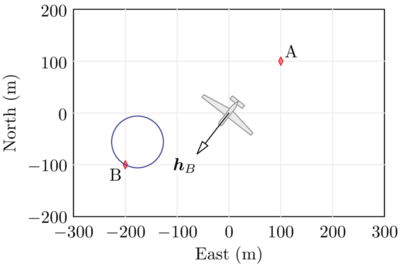 I implemented the guidance system described herein using fixed-point arithmetic on the AMP autopilot, which is made in-house by our research group (see https://doi.org/10.2514/1.I010445). The microprocessor belongs to the DSPIC33 family of microprocessors made by Microchip. In conclusion, this blog post provides an overview of a simple and effective waypoint navigation scheme. For a more mathematical treatment, the reader is referred to the attached PDF. I have also attached a MATLAB code that simulates loiter circle tracking. The vehicle dynamics are represented using a matrix state-space model.