So my buddy Shad and I headed out to my flying spot to fly the Skywalker.

This time around I used my new roof-top antenna mount, with VTR and Planner PC mounted inside the SUV in the back seat.  I found a mount designed for an iPad which worked to hold the ASUS tablet behind the passenger seat headrest.  Worked perfectly. I set the VTR on the console between the driver seat and passenger seat with the screen tilted so that I could see the video output. 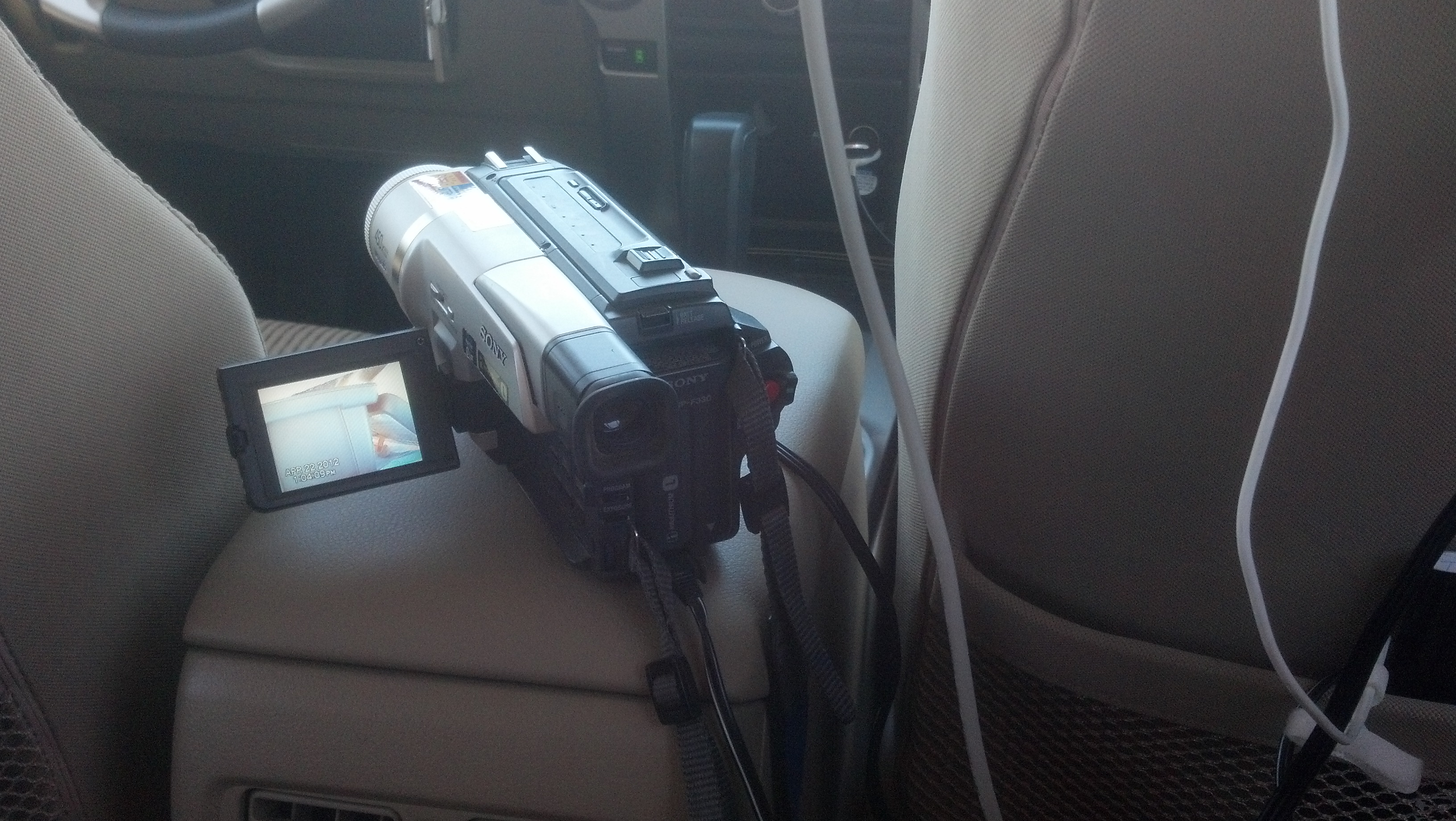 While I have two video cameras sending video to the transmitter, I haven't yet recieved my video switch, not have I cracked exactly how to activate the switch, so I just hard wired the side looking camera in to see how mounting angle and field of view were.  Besides, the idea is to record the forward view in HD with the Contour camera, right?

Before we left for the field I also finished up my pre-flight checklist.  I have a terrible memory, and have forgotten to complete important steps before flight before (set home) so I wanted to establish a more repeatable procedure.

Once at the site we got all setup, mounted the antennas and pre-flighted.  Of course, my memory being what it is, I forgot to use the checklist.  Well, we used the checklist, but actually just to stabilize the wing of the plane as we calibrated the gyro...  I'm a knucklehead.

During the pre-flight, all was good except that when in FBW-A and STAB modes the lelevator seemed to have very very little control authority.  The servo pitch gain (P) was set to 300. Thats higher than the what others seem to be using, but I doubled it to 600... it was an improvement though still provided less deflection that the other surfaces seemed to have.  I need to look at the control horns and servo arm to see if perhaps I have set it up improperly.

After a brief mis-start Shad launched the plane and started recording with his iPhone.  I remembered this time to start the VTR to capture video from the flight... but although I turned the ContourHD camera on, I entirely forgot to set it to "record".  Crap.

So this time I was able get the plane into the air and gain altitude. I flew for 2-3 minutes, initially on manual then in FBW-A and STAB.  All worked very well, though the wind picked up and I was seeing some effects on the plane.  Once I was confident, I threw the switch to auto and the APM took over.  I was very happy, it flw in a very stable manner.  I had defined a very basic square shaped course. I'm not sure that I'd say it followed the course, I'm still looking at the log data, having trouble developing an overlay so that I can see it output on google earth.  The telemetry data is showing me history that doesn't strongly suggest the waypoints were followed.  I seem to have lost telemetry at a certain point prior to "landing" as the kml terminates way prior to the "landing".  I'll post those files.

When the plane was at it's furthest point, I got worried that it was wandering off out of control, so I started nudging it home. Things were ok for a bit, then I noticed I was having less influence, it wasn't responding well to the TX.    Then shortly thereafter it started heading in, in a spin.  I gave it full up-elev, but it dropped below bush-tree level and that was it.

Shad and I identified an azimuth to the plane and hopped into the SUV and drove over the the site - or tried to.   The terrain was too dense with bushes, we tried for 45 minutes or so to get to the site without scratching the hell out of the SUV, but couldn't find it , even after dismounting and seraching on foot.  The telemetry had halted and I didn't trust the indicated last position.  I haven't been able to build a kmz using the logs pulled from the APM, just from the tlogs.  I'm actively working this - any help???? 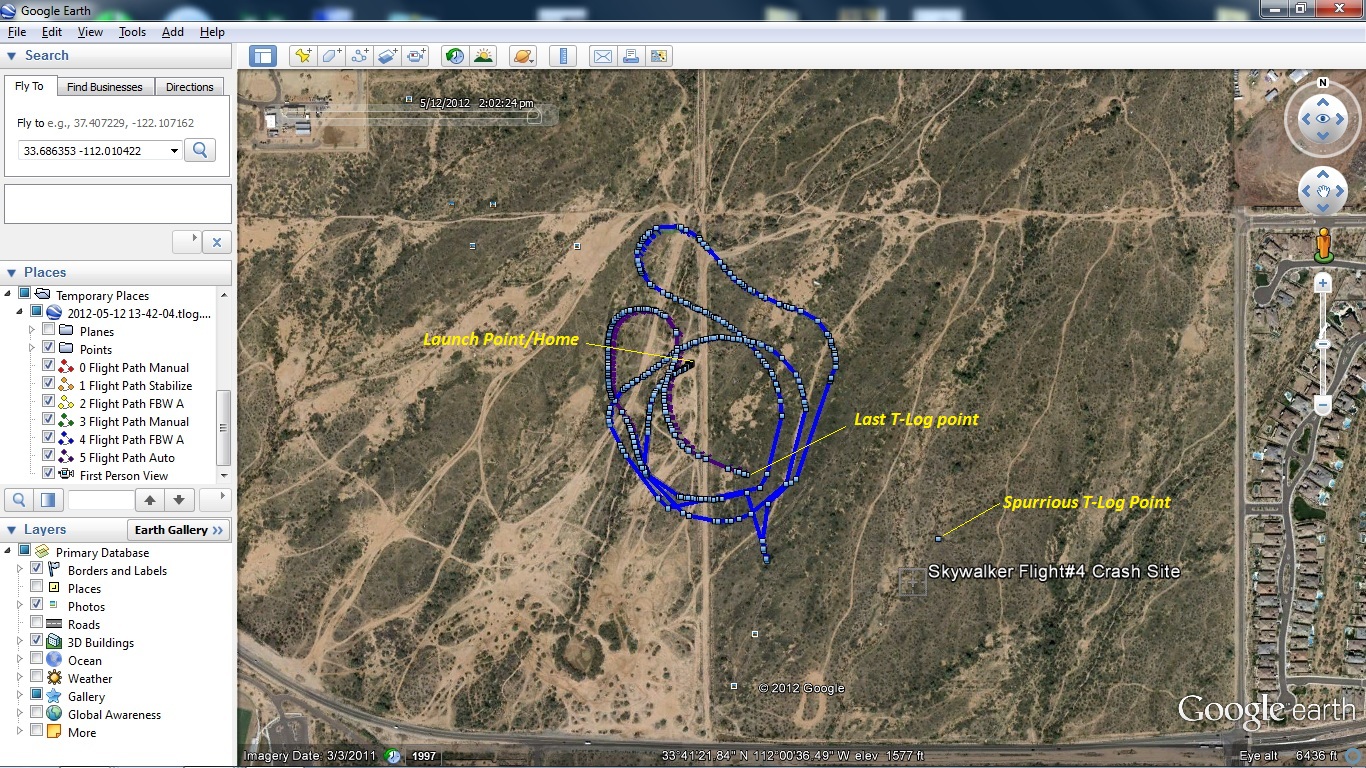 We ended up heading back to the launch site, regained the azimuth to the "landing" site and started walking.  Found the plane just a few minutes later, we had been searching in the right direction, but too far from launch.

The plane was in surprisingly good shape when we found it. I would never have believed it.  I was able to identify the impact point (below). It hit the ground somewhat hard, but was upright, wings level and could not have had more that a 15 degree nose down attitude. 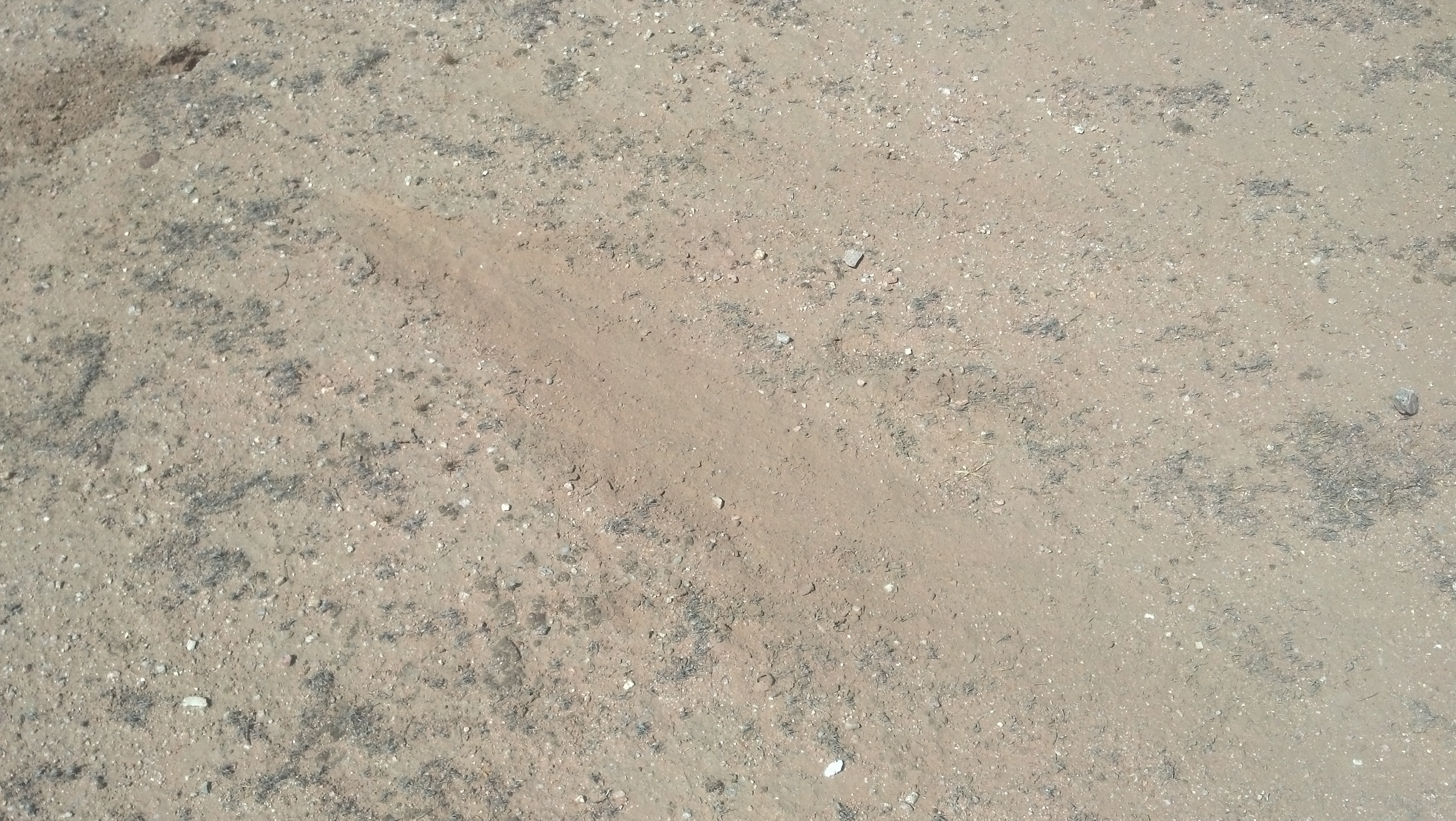 The wooden camera pod was damaged, more from the CountourHD (not recording) being popped from it's mounts and the safety wire shearing through the wooden from. 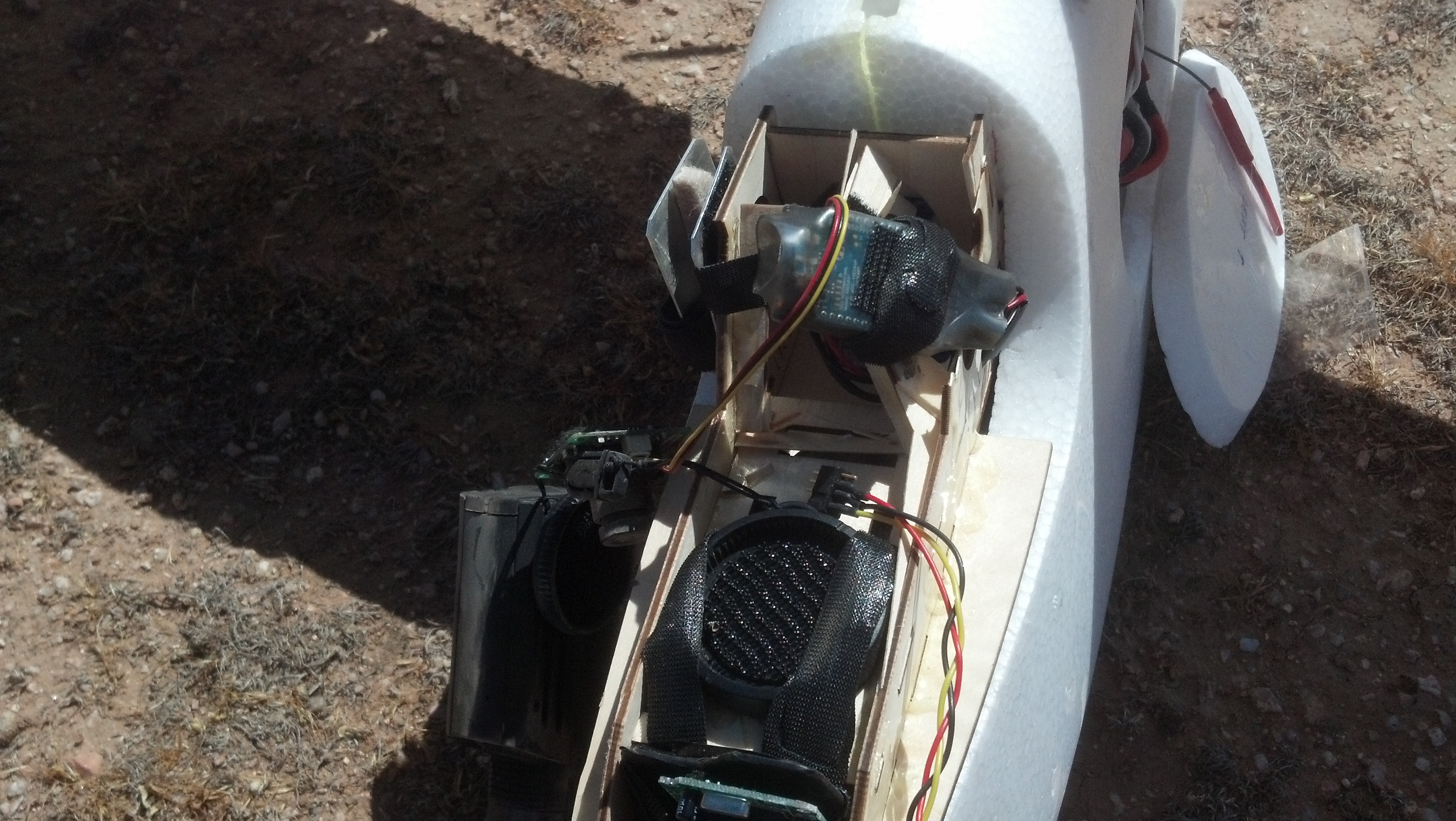 The telemetry unit looks to be toast.  The high mass of the 900mHz antenna wrenched the RP-SMA connector off the circuit board.  I think it is repairable, but not by me.  I'm seriously considering dropping the whip antenna and picking up a 900mHz cloverleaf antenna from ReadyMadeRC.com.  I've very happy with the 1.3GHz cloverleafe I use for video. I'll give it a shot at resoldering, but I'll have to do the work under a microscope and I think I'll have one shot at it.  That was a shame, of all the parts of this plane, the XBee's have been the most difficult to get.  I finally gave up on 3DR and bought directly from Digikey.  Maybe this is a good excuse to go with the new 3DR radios...

The vertical stab is torn a bit, but thats an easy fix. 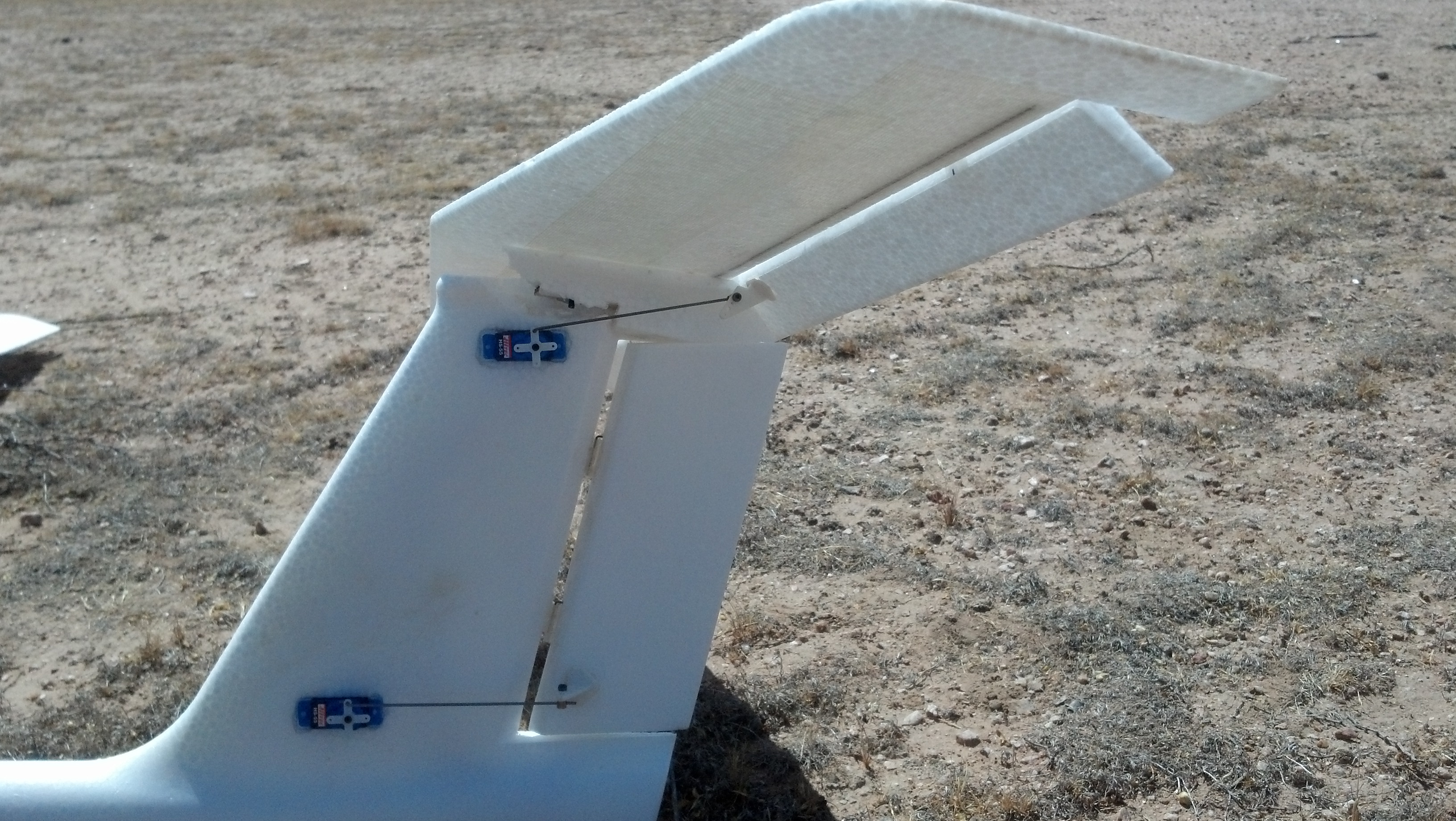 Overall, after only 6 minutes of flight I'm still very happy to have another success.  Every time I have flown, even for the shortest flights, I have learned something.  I'm a big believer of lessons learned.

I still haven't been able to download the video from the VTR, I have no Firewire capability, gotta get an adapter.  When Shad sends me the iPhone vid I'll edit and post.