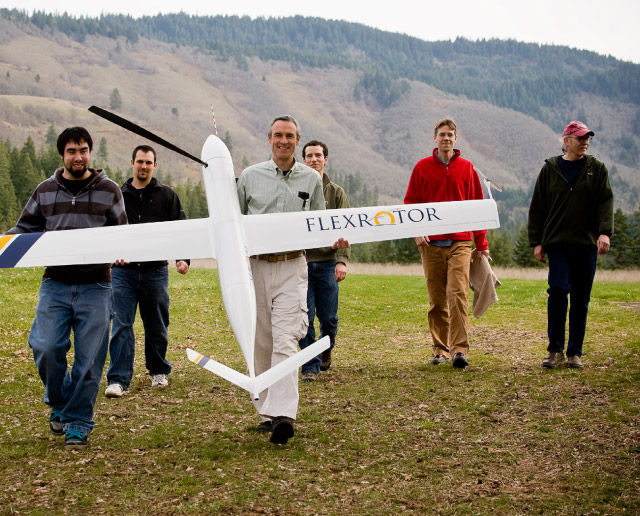 Here's an excerpt from an article in Willamette Week, a Portland weekly. It's a mix of well reported details about the founders and clashes within the company, plus some clueless stuff about how drones are evil and kill people (Insitu UAVs are actually unarmed, something the reporter seems not to understand). Read the comments, too.
"With a successful 1998 flight from Newfoundland to Scotland on a gallon and a half of gas, Aerosonde became the first unmanned plane ever to cross the Atlantic.

The publicity stunt captured headlines. But McGeer never managed to sell more than a handful of the drones—despite some enthusiastic support from within the bureaucracies of national weather services around the world, they could not be swayed into buying.

“That was life,” von Flotow says. “When you’re running a little garage business—and there’s many such businesses—you’re always chasing the dream, and the dream never quite makes it into your grasp.”

The next opportunity at McGeer’s door came from the tuna industry, of all places.

Tuna companies track schools of the fish using helicopters. It’s expensive and dangerous work, and McGeer was told the industry would pay for a plane that could launch from a boat with a camera to do the job.

McGeer set to work designing a new unmanned plane he called the SeaScan.

Again with help from von Flotow, McGeer and five employees worked at a dizzying rate of invention to master the biggest technical hurdle—launching and retrieving the plane from the deck of a ship.

They came up with a 14-foot catapult that slingshots the plane into the air at more than 50 mph, then spent years perfecting and eventually patenting the so-called “sky hook” landing system, which lets the plane fly into a rope suspended from a pole.

With a maximum speed of about 90 mph, the SeaScan was the first unmanned plane able to deliver high-quality video footage. Like the Aerosonde, however, the SeaScan never found a successful market.

This time, it was terrorists who got in the way.

Just as the SeaScan prototype was being completed, the 9/11 attacks came. McGeer had already been in contact with Boeing and others in the defense industry for the better part of a year about possible military uses for SeaScan.

Now they left the tuna industry behind and went into high gear. But not without reservations.

“There were plenty of people who weren’t comfortable. But we went along with it,” McGeer says. “I took an ends-justify-the-means argument—that taking this money would allow me to get into the civilian market. But I was wrong. That never happened.”

Insitu underwent other rapid changes in 2001. McGeer called in Steve Sliwa, a friend he knew from their undergrad days at Princeton, to turn Insitu around. And coincidentally, the day before 9/11, the Boeing Co. first agreed to invest in Insitu."