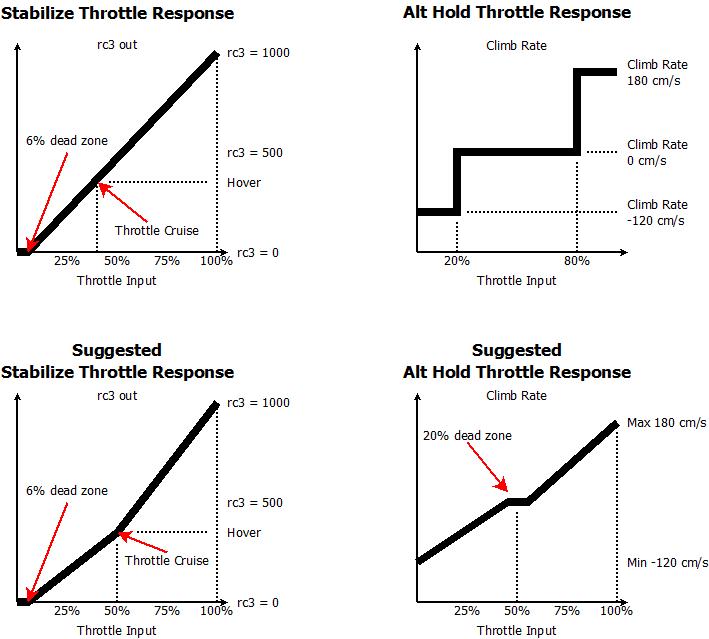 Thanks for taking the time to read this post. First of all I would like to reassure you that this is in no way a criticism of the code or the Dev team, they have done a fantastic job.

I am working towards making my own contribution to the Arducopter code base to improve the "Fly by Wire" aspects, but it will take time for me to get the environment set up. (two kids under 2 and 2 jobs) So in the mean time I would like to discuss my ideas. If they are supported and still not implemented when I get my finger out then I will start attempting to implement and test them.

I would appreciate any feedback you can give me.

So this is my first idea to address two problems I and others have experienced in using the Arducopter.

The dreaded drop in altitude when transitioning from Alt Hold or any other Auto mode to Stabilize. Ok, it isn't a big deal once you get used to it but it isn't pretty and I think we could do better.

So I see a number of problems to be addressed:

1. Drop or increase in height when changing modes.

2. Throttle hover position in Stabilize is not in a fixed location so it needs to be "found"

3. Alt Hold is implemented such that it changes height rather aggressively.

I was able to address point 2 and even point 1 to a lesser degree setting up my throttle curve in my transmitter to set hover at mid stick.

Point 3 makes using Alt Hold to control altitude while learning or filming quite clumsy or impractical.

Ok so here is the idea. It has three parts to bare with me.

The diagrams on the right show the throttle input vs requested climb rate when using Alt Hold. I am suggesting that we should make this progressive with only a small dead band in the middle. This makes it possible to make smooth and slow altitude changes without having to use the Manual Throttle. (great for learning and filming)

Mid stick is always what you need to hover.

Change from Alt Hold to Stabilize should not result in scary moments because the throttle stick position should be within 10% of Hover.

Change from Auto modes, when the throttle has been set to max or min, will give the pilot 2 seconds warning before going to full or no throttle.

Alt Hold is much more "Fly by Wire".

Alt Hold would drift if the throttle is just outside the much small dead band.

There may be times when the 2 second delay moving to Stabilize could prevent the pilot adding full throttle in time to prevent a crash.

I would really appreciate any feedback and insight people have into this idea or these problems in general.

Code for this approach:

As always the code is marching on and there are already changes made in the areas I have been discussing. So I thought I would list the main requirements in the code to make this work the way I describe.

The main requirement is that g.throttle_cruise is only updated when the copter is in a stable stationary hover. The simple testes for this could be

The code for the throttle position to manual throttle output is very straight forward.

The code for the throttle position to altitude rate output is something like this:

Sorry but I am not familiar enough with C to add the types quickly.

In the latest version of the code the throttle_cruise factor is updated in two places. Here where it was before and what I think works well with this approach.

The new addition here is a problem for this approach. The code is Here:

The second update prevents this approach from working because it is constantly resetting the Altitude I term and adding it to g.throttle_cruise.