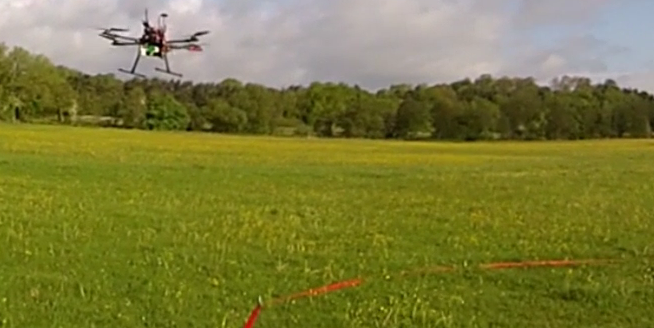 It's been a few week since tests were conducted of The Groundhog line-following a straight red line.  The Groundhog was an entry in the MAAXX Europe 2017 competition and although it didn't win, the lessons learned are being implemented so that it can be more competitive next year.

Time and weather have eventually converged to permit testing for the oval track - in this case a 50m oval comprising 50mm wide red webbing.

The test turned out to be quite successful, with following speeds of 1.5m/s achieved under autonomous control provided by an on-board Raspberry Pi 3.  This is significantly faster than the winning UAV in MAAXX Europe this year, which is quite pleasing!

The YouTube video shows both on-board and off-board camera footage, the former demonstrating the roaming regions of interest used by OpenCV to maintain a lock under varying lighting conditions.

The next steps are to increase the speed still further and control the altitude more precisely.

More information on the Groundhog can be found at www.mikeisted.com.