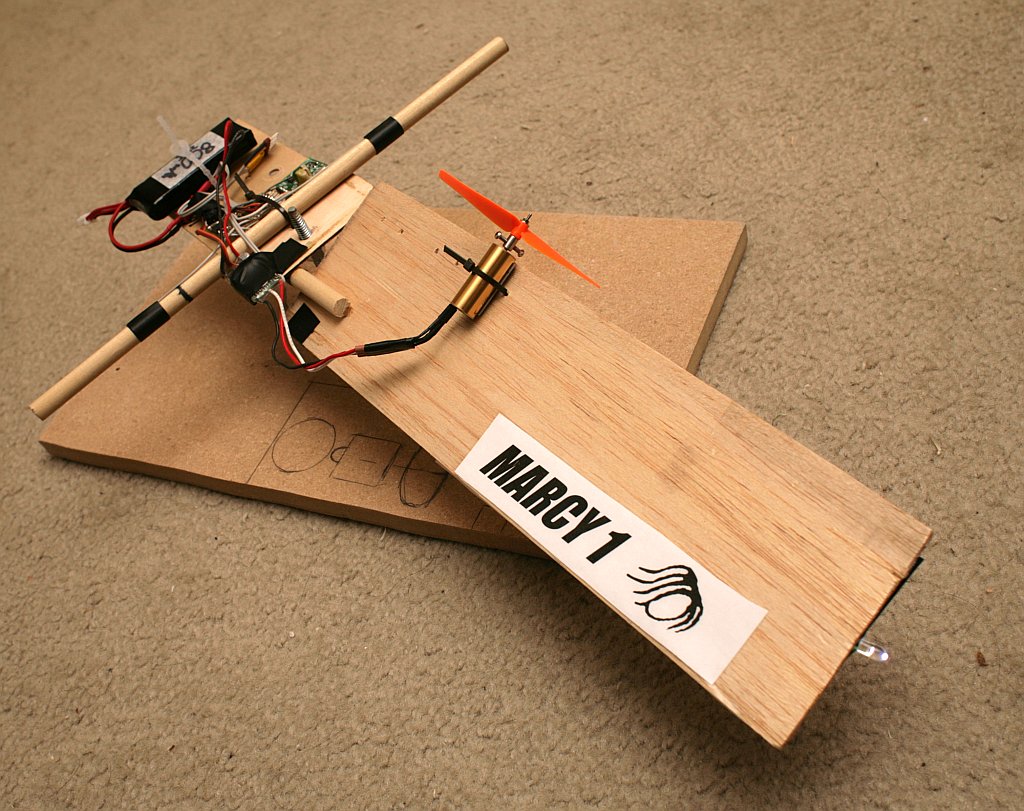 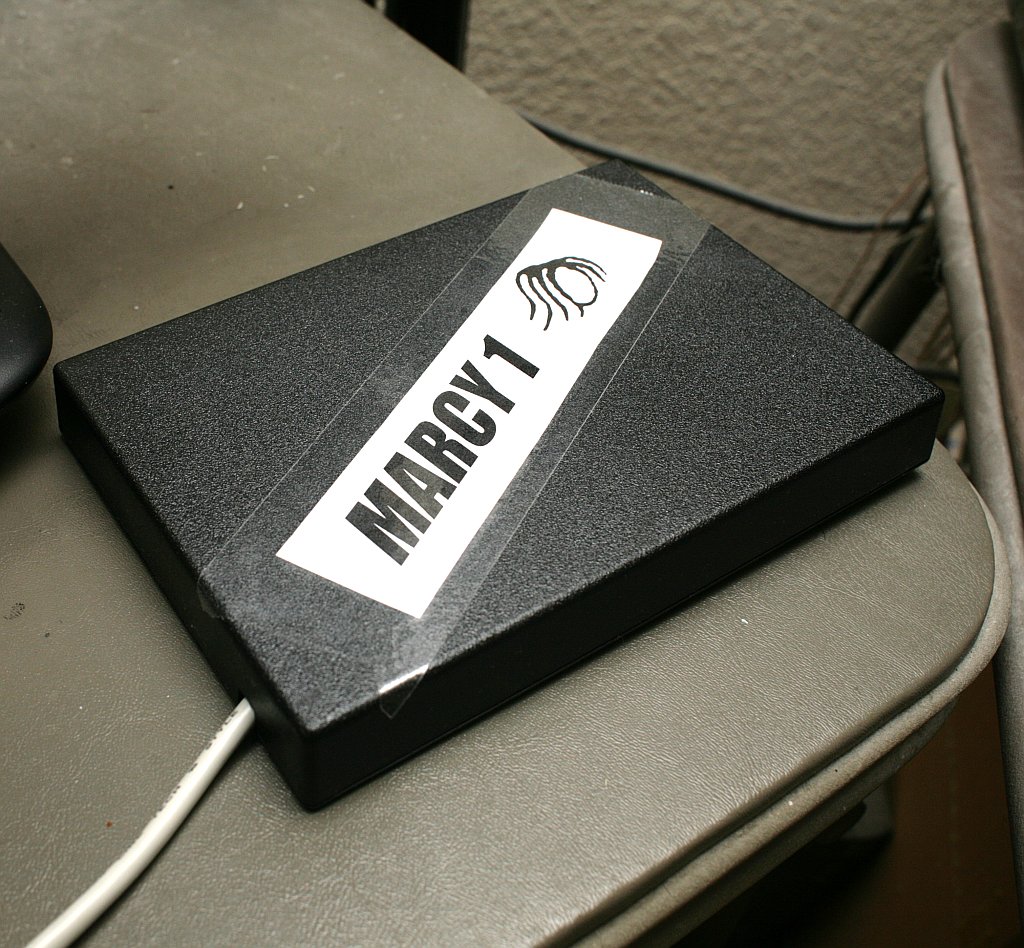 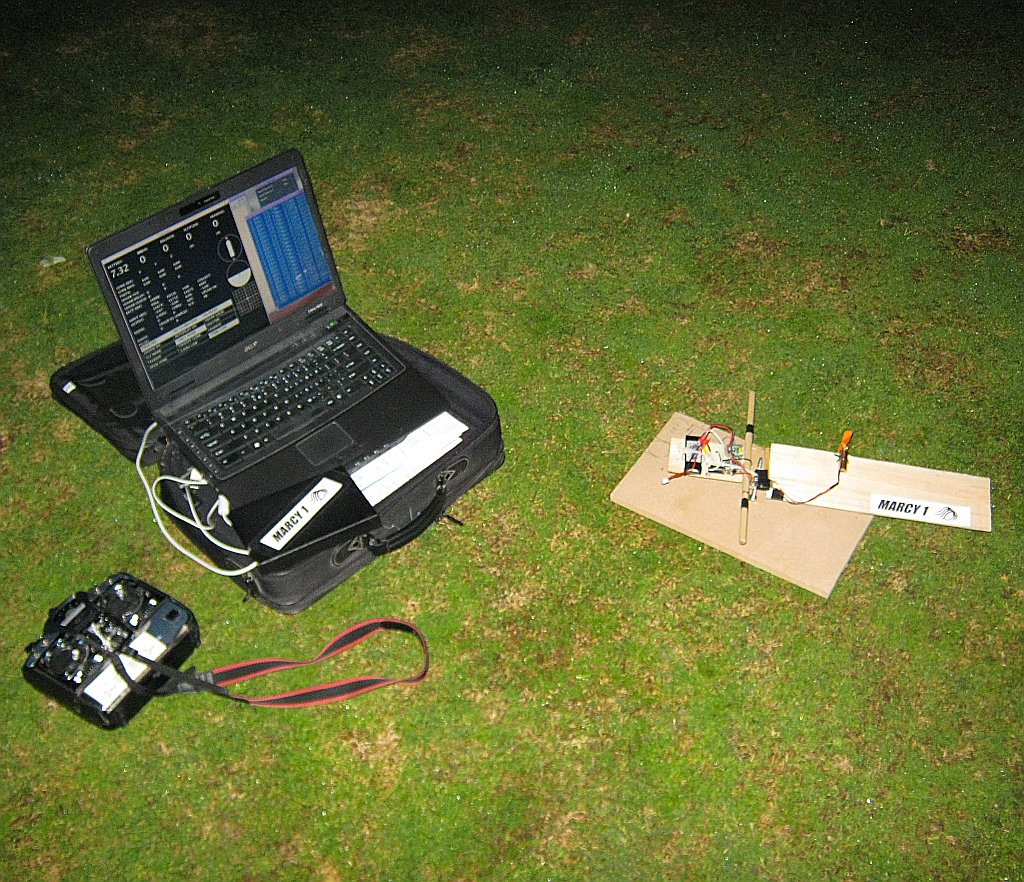 This design did not achieve horizontal control. The pitch oscillationfrom not having enough balance beam inertia offset any horizontal force. This redesign did achieve 2 horizontal changes of direction using onlythrottle modulation. Unfortunately she threw a propeller &disintegrated upon crashing. Marcy-1 was already very prone to throwing propellers, her 5300kV motorseemingly at the limit of Chinese plastic. We have a 4' monocopterplanned for extremely long duration hovers with normal RPM.There it is. XYZ positioning using only throttle on the Marcy 1 vehicle.Unfortunately not enough authority to move upwind, so we only gotcrosswind translations & a slower downwind drift than if cyclic wasneutral.As Mike Bakula recommended, used raw magnetometer output & detected whenthe halfway point in the waveform was crossed. Much better than usingderivatives like MIT since the derivatives are very noisy.Very important to have the balance beam loaded as much as humanlypossible to prevent pitch oscillation. Having the motor & battery onthe balance beam is the easiest way to load it. She did indeed bank inthe direction of the translation from throttle alone.An aileron servo would do better against the wind but it would be heavy,expensive, & wear out fast. No way a servo would cycle 6x a second forvery long. If you're gonna use 2 PWM, there's no point in a monocopteranyways but it's probably unavoidable for any long duration, outdoorvehicle.PROPELLER TERRORISMFinally got a flight in no wind & drizzle & she was easily controllableusing only 1 PWM. She was very sensitive to breezes.1 problem was power level changes when applying cyclic which we actuallylearned to handle. Greatest horizontal thrust comes from gliding herwhen applying cyclic. You can stall the motor this way so she justapplies thrust in 1 direction yet stays in the air. Greatest verticalthrust comes from releasing cyclic. Power management on a monocopter isa new artform. 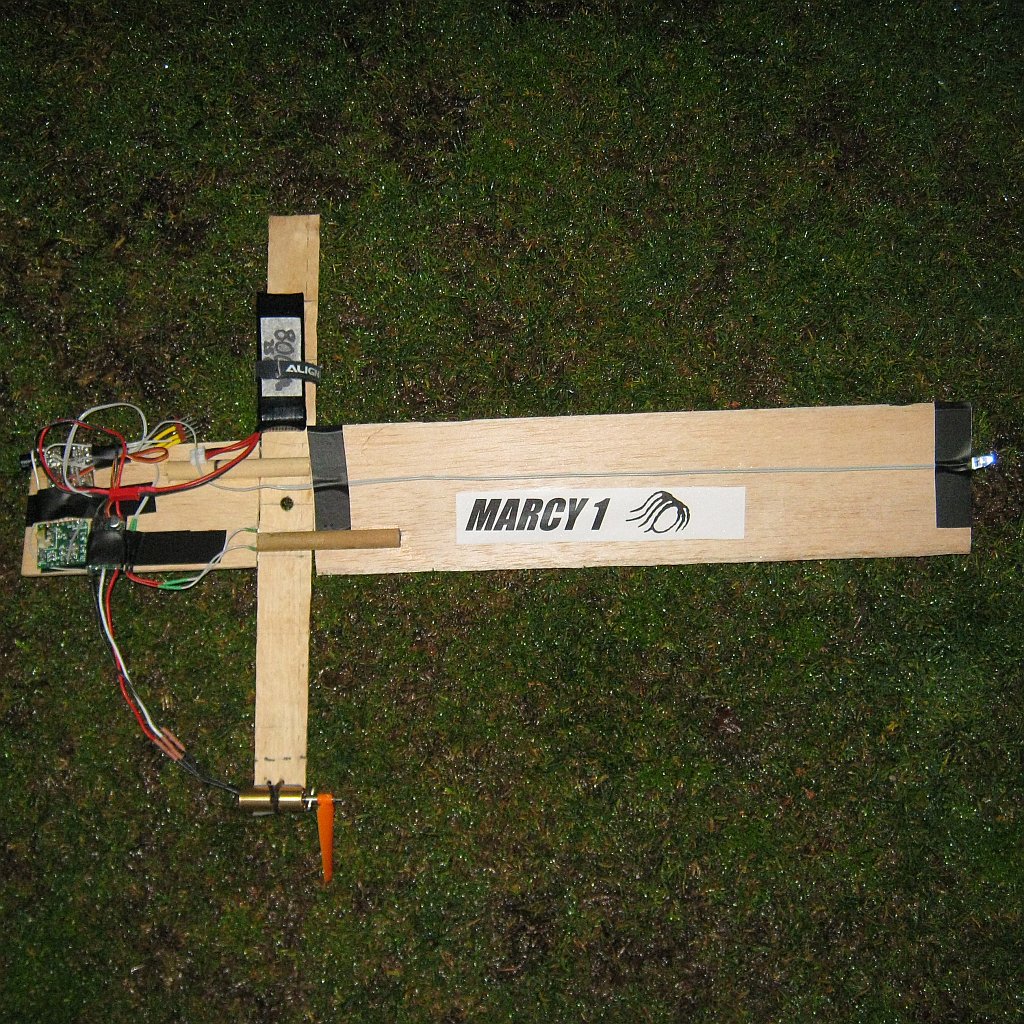 The mane problem was broken propellers after 6 minutes. That's right.The GWS 3x2's are just not strong enough to provide hovering power.Marcy 1 is perfect in every way but dead without a stronger propeller.Ideas range from griding them down to 2.5x2 & using 3x3 if the weatherever improves. 3x2 ground into a 2.5x2SONAR REVIVALGetting sonar working on a new flight computer & new radio is nevereasy. The mane problem is actually the microcontrollers & tools. Everynew microcontroller has a different register set. If you want SPI,magnetometer, & 3k of RAM that means capture compare & analog need to berewritten.Also, the MRF49XA takes so much more CPU time to service than the XBee,sonar had to go on a dedicated USB device, making it more expensive touse 8 bit PICs than 32 bit ARMs.3 years ago ARMs were $10 & really tough to solder. Now they're $2 &easily soldered. PICs are only still around because of code reusethough ARMs need a lot more pins for programming.Building a 100Mhz computer from scratch using an ARM has always beenalluring, but the only motivation now would be going back to embeddedautopilots or a huge price advantage with ARMs.SONAR THEORYThe trick with sonar is to synchronize the clocks on the ground station& aircraft. Vika 2 did it by sending 1 beacon to the ground station &aircraft simultaneously. Marcy 1 doesn't have sonar on the same USBport so there's a significant rewrite already. The complete Marcy 1 sonar guided kit, applying all the sonar knowledgegained from Vika 2. The standalone sonar board is the simplest possible.Now more views of the machine with 3x2's & loaded balance beam. 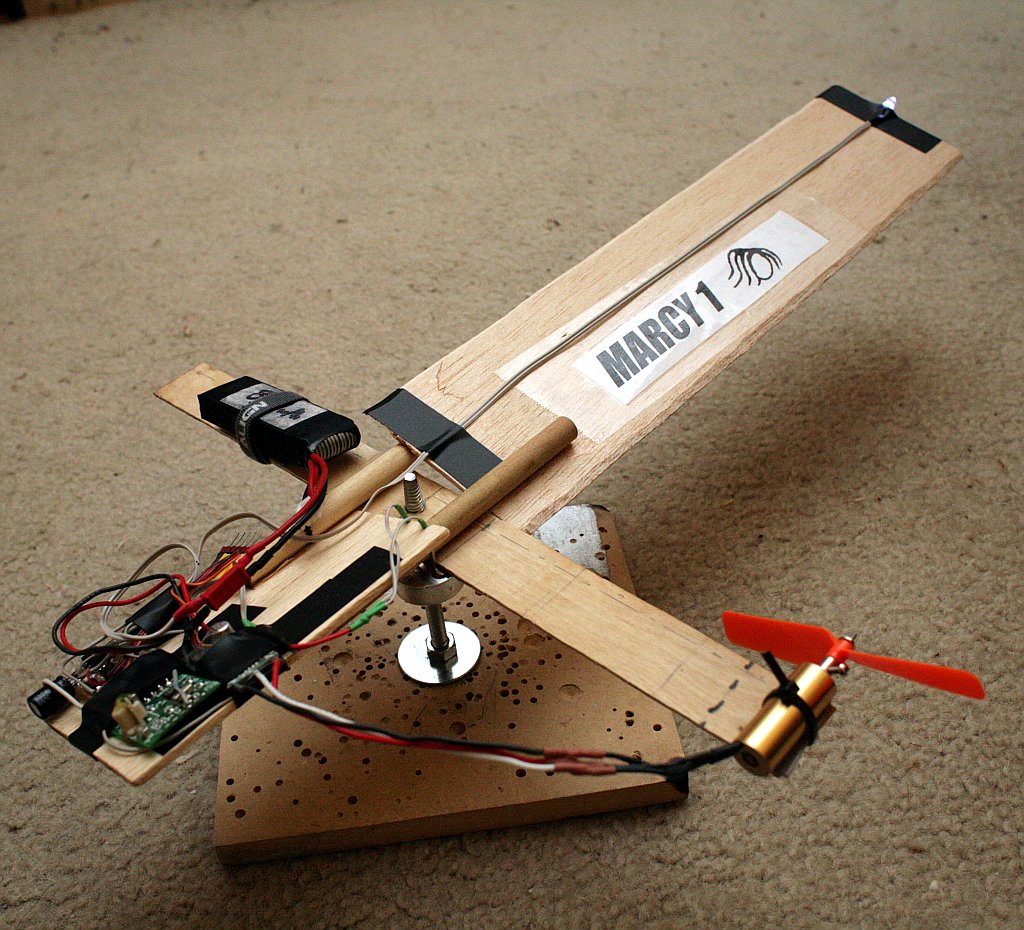 Sonar installed, magnetometer in the stock & this thing which tellstime. Wow that sounds neat. Making the sonar crash resistant is going to require a new fuselage. Aren't you glad you didn't need to solder this. This is standard forChinese toys though not Air Force grade except for the name. 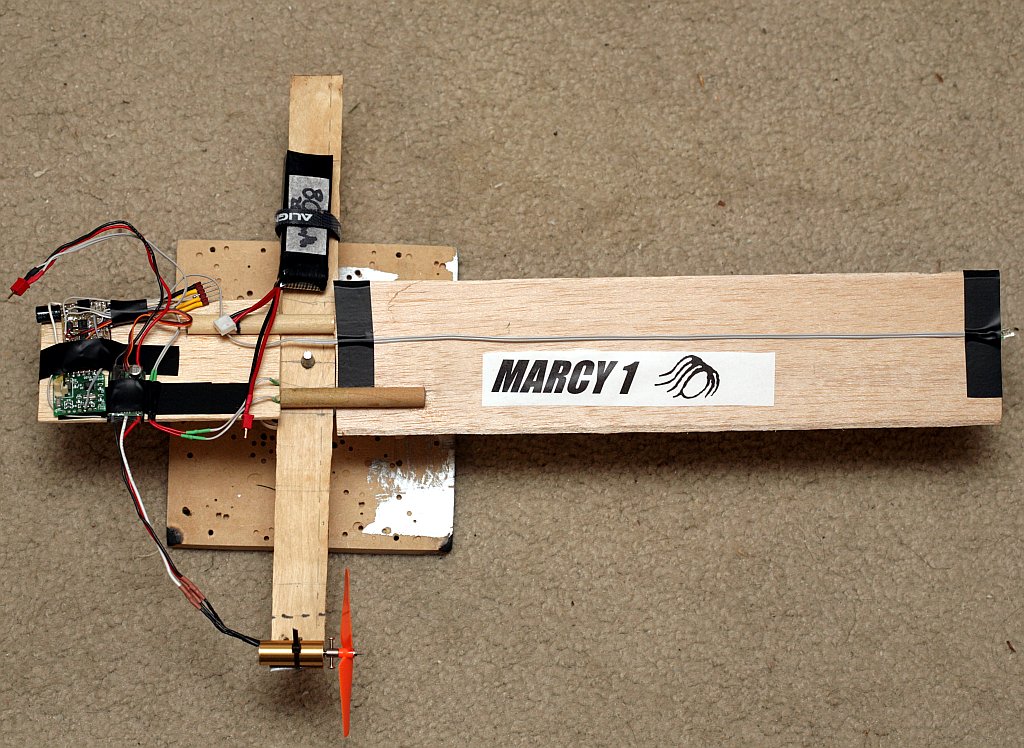 Final look before crashing.
E-mail me when people leave their comments –
Follow