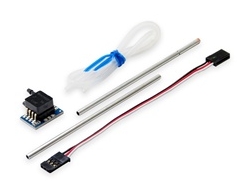 [UPDATE: I posted the wrong version of the code before. If you downloaded it, please download it again and replace it with the new code. Servo output is fixed]

--Airspeed sensor (shown) is now autodetected if present. It's no longer necessary to set this in the APM_Config.h file. Since the magnetometer and GPS sensors are also now autodetected, that means that for most users there is no reason to have to fiddle with configuration files at all.

--Xbee transmissions are now improved, as are MAVLink comms. Waypoint writing and reading should now be more reliable.

Known issues in this build:

--Some in-flight mission commands are not yet implemented

--Restart mission may not work

--MediaTek lock may not be detected after a cold start. Reset the board to do a warm start, after which lock should be fine.

We're planning on keeping APM in beta until after the Sparkfun AVC competition later this month, which should be a good test and opportunity to really wring it out. If all goes well, we expect to release APM 2.0 as final code around the end of the month.