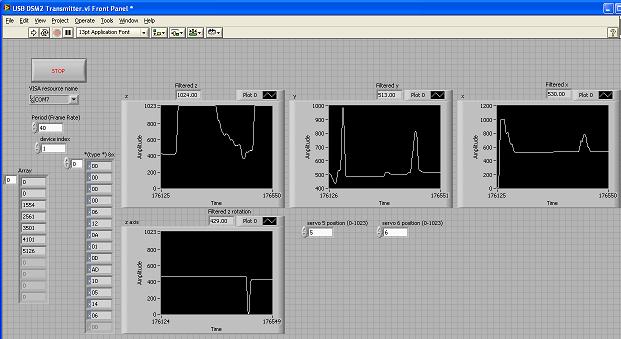 Today i flew my Blade MSR using a joystick, my PC, and the 2.4ghz LP4DSM transmitter which used to be in the tx controller. The serial protocol is best documented here, but information on this exists elsewhere including here in a few posts, on diydrones. I'm pretty excited that I finally got this working...it took a few nights of serious head scratching to work out some kinks.

I used a USB to TTL breakout board to transmit to the LP4DSM module, which apparently is a pretty common module found in numerous spektrum and other transmitters. I used LabVIEW to assemble all of the code, pulling axis information from the joystick, filtering this data, and converting that into hexadecimal PPM which was sent via serial to the TX.

I still have some bugs to work out, but it worked, and that is progress.

So, while I was working on this, I also bought an Arduino Pro Mini (yes, i gave into the temptation of a $20 already tested, super small, and assembled board :-D ) and an "ArduIMU Sensor Board - Six Degrees of Freedom (Main)". I put the board name in " " because it's actually only 4 degrees of freedom, having a 3 axis acc and a 1 axis gyro, with analog output.

Lastly, I bought two micro servo boards, which are the same servos on the Blade MSR, and the BMCX, and possibly others. i'll have to post the name/details of those servos later, i can't find the info right now.

My plan is to put both boards on my MSR, to make a stabilized camera mount using my endoscope vid camera. You can see where this is going.... :-D

....pull off the 5 in 1, add 2 more servos and a rx, and I should have a blade MSR that can be video camera flown, flight stabilized, and hopefully very, very cool. (and hopefully light enough!)