Recently, GoPro released new firmware for the GoPro HD camera (http://gopro.com/support/hd-hero-firmware-update/). There are improvements and features in various areas, but the one that interested me was the "Live Feed Out" feature, which is the ability to feed VGA video out through the "VGA Out" port while recording HD video onto the SD card at the same time. The "Upside Down Mode" (in case you need to mount the unit upside down on your aircraft) and "One Button Mode" (starts recording as soon as it comes on) also seem like they would be useful for some folks in our community.

I mounted the GoPro on the front/bottom of my custom-framed Arducopter. I tried various methods (more on that later), but in the end, I wedged it into the frame into a velcro sandwich. It's extremely snug, but it will give if it needs to.

I bought a little cable that connects from the GoPro's AV Out port to a 5.8Ghz 100mW ImmersionRC audio/video transmitter. This in turn transmits VGA-quality video in realtime back to my Fatshark 5.8 Ghz Aviator Video Goggles. I'm using the 5.8Ghz so that it wouldn't interfere with my 2.4ghz RC Rx/Tx.

My backyard tests indicate that I am able to transmit FPV video while simultaneously recording High-Definition video onto the SD card. The FPV in the video goggles has a bit static at times (which I understand to be pretty typical for transmitted video), and not particularly bright (when I was flying on a cloudy day), but appears quite useable. The quality of the recorded HD video on the GoPro is excellent as usual. I haven't used it in full, long-distance flight yet, and I'm new to FPV, but it seems very promising.

During this project, I also tried three different micro and sub-micro pan-tilt servo kits from various vendors. My initial goal was to setup a head tracker so that the camera would tilt and pan based on where I looked. I got the electronics and RC aspects of that to work relatively well, but I didn't like the way the pan/tilt unit, even the smallest and most robust one, tended to hang the GoPro out in the open below the Arducopter. I'm not a good pilot, so I was scared that my "landings," which are sometimes more like controlled crashes, would destroy the pan/tilt/camera, so I opted for the more robust protected mounting approach that you see in the pictures. Once I get confident with my flight skills in general, and FPV flying in particular, then maybe I'll mount the tilt/pan and head tracker again.

I've included pictures of the GoPro mounted in the Arducopter, plus the electronics on top including the ImmersionRC transmitter (which is the red and green thing under the battery alarm at the top of the screen). 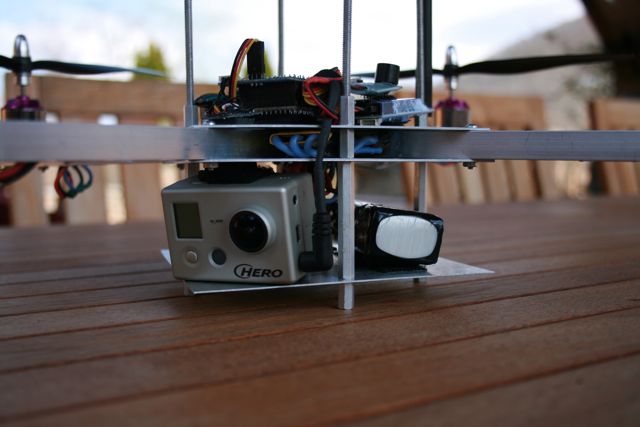 I've also included a picture of the new mounting for my sonar, so now it's mounted inside the frame (in the center of the bottom), rather than on the outside like it was before. Also new with this version of my Arudcopter is that I've mounted the ESCs between the two main center plates. I also added a lower plate for the battery, camera, and sonar to attach to (and to reduce shear stress on the vertical posts during crashes). I like the new design because it gives me plenty of cargo room below, but it required me to make the center plates a larger square (5.3" now) and it was a real bear trying to squeeze those ESCs into the little triangle between the arms. In my continuing quest for crash-resistance, I also upgraded the center plates from 0.032" 3003-H14 aluminum to 0.050" 6061-t6 aircraft aluminum. Thus far, it's proven much more robust than the previous versions (in which the aluminum wrinkled a bit during really bad crashes). But now my arducopter is getting pretty heavy. Fully loaded, with the camera, battery, video transmitter, etc., the flying weight clocks in at 1181 grams. It no longer resembles the admirably light and agile DIY-Drones Arudcopter kit as much as it did before. It's more of a flying tank.  :)