This is a blog post showing anti-vibrations objective measurements of different isolation systems, obtained on my Mr. Grey X8 workhorse shown on the introductory picture. All vibrations measurements are made during periods of min 30 sec of hover in stabilize mode. Take-off and landing periods are excluded of measurements.

Configuration of the test craft:

-All tests were made with the craft configured fully ready-to-film : except the gimbal which remained off not to measure its own generated vibrations. The camera was thus simply screwed on the gimbal with no power to the brushless motors. 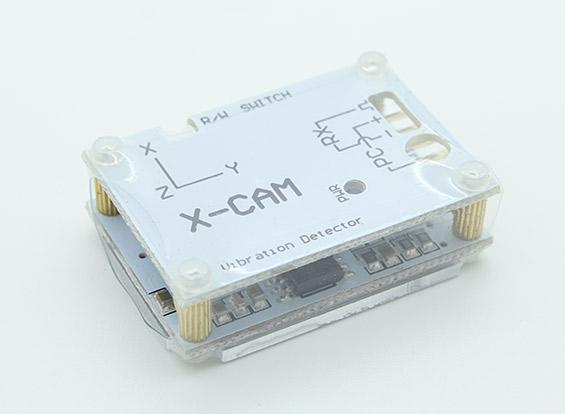 X-Cam is installed on the different areas of the craft to be tested. Its mesaurements are triggered remotely by a PWM pulse (on/off switch allocated on Taranis). It is powered directly through the PWM servo cable connected on the receiver.

Data are stored on board its flash memory. It is made for vibrations measurements in the 0-200Hz range and can store up to 3 min of continuous measurements.

Through the X-Cam GUI , data is downloaded from the flash memory to produce a time graph (basically useless as it shows the X-Y-Z vibrations measurements along the time axis), and a frequency graph showing X,Y,Z vibrations amplitudes (in number of g) versus frequency (in Hz). Raw data or weighted averaged data can be calculated.

First a silicon ring system as shown below, Four of these were used in a X configuration between Mr Grey's two plates (see introductory picture). Each plate is made of plywood; square shaped with 20 cm long sides.

Silicon rings come in two stiffnesses: red for softter silicon, black for stiffer silicon. Here, only the red softer ones were tested. Each Secraft system costs about 9 euros each (www.secraft.net) , which is relatively cheap.

Second tested system is a "Bell" shaped  precompressed silicon system. Each "Bell" is made for a 250g payload. Each one of them costs about 39 euros (www.altigator.com) which is quite expensive. It is mostly used in high end professional aerial photography rigs : Four of those were used, in each corner in between Mr Grey's test plates as shown below: 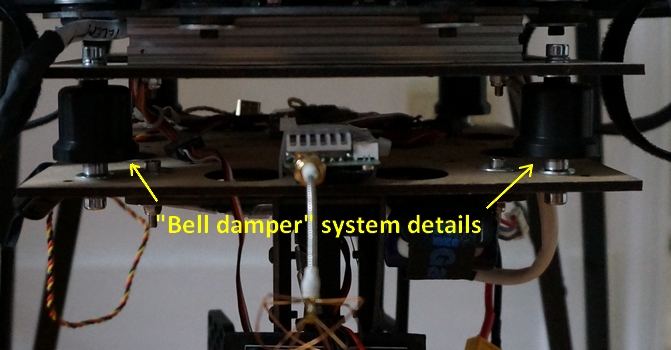 In order to compare results, a reference measurement is made on the frame itself, with the X-Cam placed at the center of Mr Grey's top plate, under its protective "flower pot".

Frequency domain picture shows two frequencies were vibrations are significant : 85Hz and 175Hz; The measurements show about 0,3g of vibrations on all three axis at 85Hz; and 0,4-0,5 g vibrations at 175Hz.

X-Cam is now placed on the second bottom plywood plate on which the gimbal is fixed,

Second test with the "Bell" system:

X-Cam is placed at the exact same location as for the first test,

If we show the silicon ring's system on a graph at the same scale as Bell's system:

Comparison of both anti-vibrations systems:

For once, more expensive, supposedly professionnal parts were not up to the task verus cheaper diy parts.