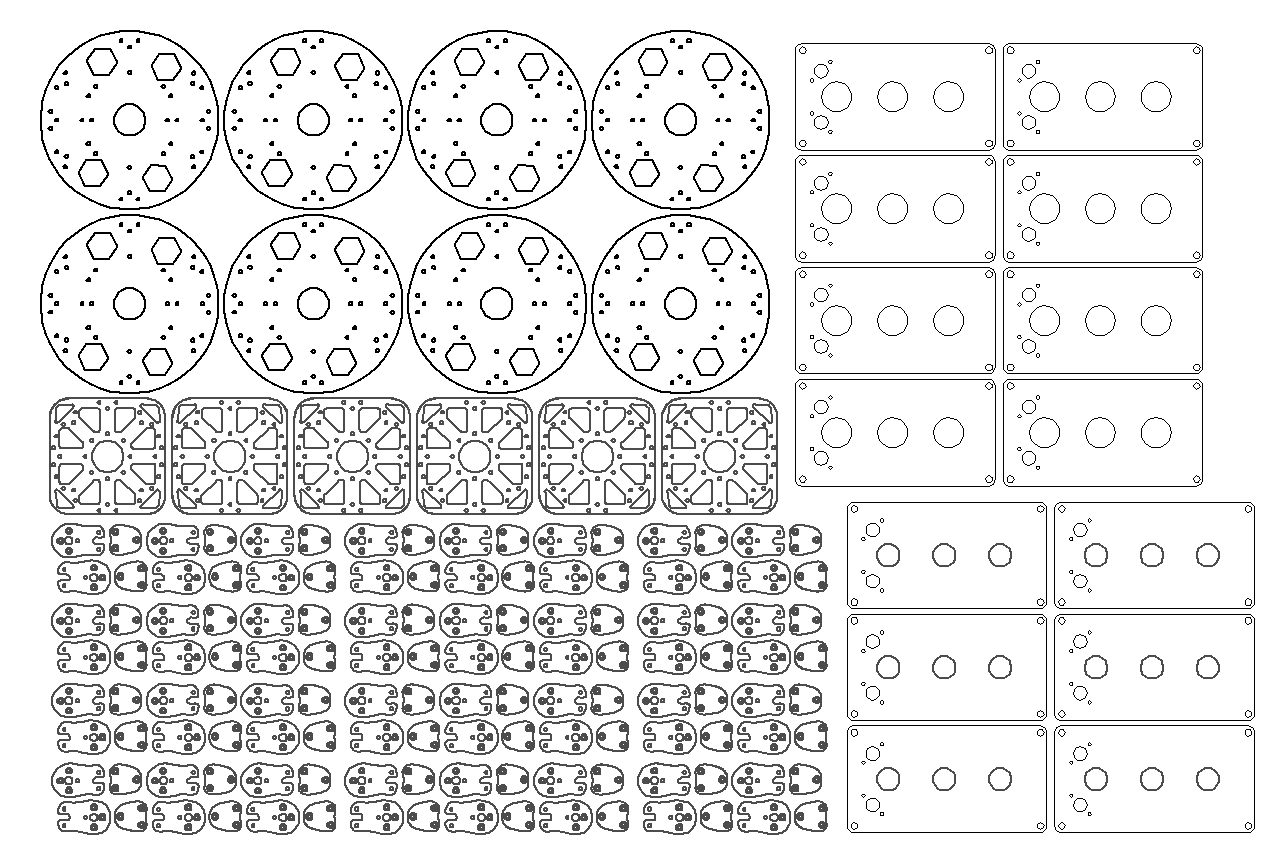 A few friends and I built a batch of Hexacopter frames.  The design is based upon the Arducopter frame, but I ended up creating all of the parts from scratch in AutoCAD.  The frame is designed to be 100% compatible with Arducopter parts, such as motors, arms, mounting plate dimensions, etc.

We cut a batch of four Hexacopter frames.  This was done at a local shop called Custom Sheet Metal Inc. on their Flow Mach 2 waterjet cutting machine.  The material for the base plates and motor mounts is 3/16" Lexan, and everything else is 1/8" Lexan.  All of the Lexan came from a local plastics supplier, Regal Plastics.  We used two 4'x4' sheets of Lexan, one of each thickness.  Originally we had planned on making as many frames as possible out of that material.  However, it turned out that the real limiting factor was the cost of waterjet time.  The waterjet cost about $200/hour, and I believe that the layout for sheet 1 (image file in post below, has circular frames on it) was originally a four hour job.  We ended up reducing the number of frames and spare parts that we were making to save time and cost.

This frame plus a few parts linked below should give an almost ready to fly kit:

The base plate that I drew can can be built up as a quadcopter or hexacopter, but not an octocopter.  It is completely compatible with Arducopter parts.

You may notice that the motor mounts are all connected to one another by a thin runner.  This is because the waterjet machine can only cut parts of a certain minimum size before they fall through the cutting bed.  We had to link these.  After they were cut, we had to separate them by hand and file them down.

The dome that I designed is different from the Arducopter design.  It consists of arc shaped pieces that attach to the frame arms and meet over the top of the center of the craft.  They are shown in the last picture in this post.  There are two types of pieces used--the lower arms and upper arms.  Two lower arms meet each other in the middle and bolt to each other.  They also have a slot on top to mate with the upper arms.  The upper arms are slightly larger than the lower arms, and have no grooves.  If you use the arms on a quadrotor, they will mesh perfectly.  If you use them on a hexacopter, you will probably have to file down the slot in the lower arms just a bit.  This is because in a quad configuration, the arms meet at 90 degrees, but in a hexa configuration they are slightly off.

Our actual final cost per frame is a little hard to estimate because we got some stuff for free and we also were cutting other things besides hexacopter frames in this batch.  The ballpark cost of each frame was roughly $100-150.  I've included the basic costs below, which hopefully can serve as a guide for you.

$200/hour.  No set up fee.  Make sure to have good, clean DXF files when you go in.  These guys were extremely helpful and ended up giving us a really, really good price.  I've attached PNG files of what our original requested waterjetting layout should have looked like.  It turned out that we changed it quite a bit at the shop to reduce part count, cutting time, add runners between small parts, etc.  Because of that I don't have a good feel for how many parts took how much time to cut.  As a ballpark estimate though, I think the two sheets as shown in the images below would have taken about 2 hours each.  Most of that time would be spent on the smaller, intricate parts.

This file includes base plates for Hexacopters and Quadcopters, and also motor mounts.  The rectangular pieces are from another project, and are included at no extra charge.  The image below shows what the DXF file looks like.

This file includes mounting plates (the squares with all the slots), battery mounts (bottom left), domes (top) and legs (bottom).  The image below shows what the DXF file should look like. 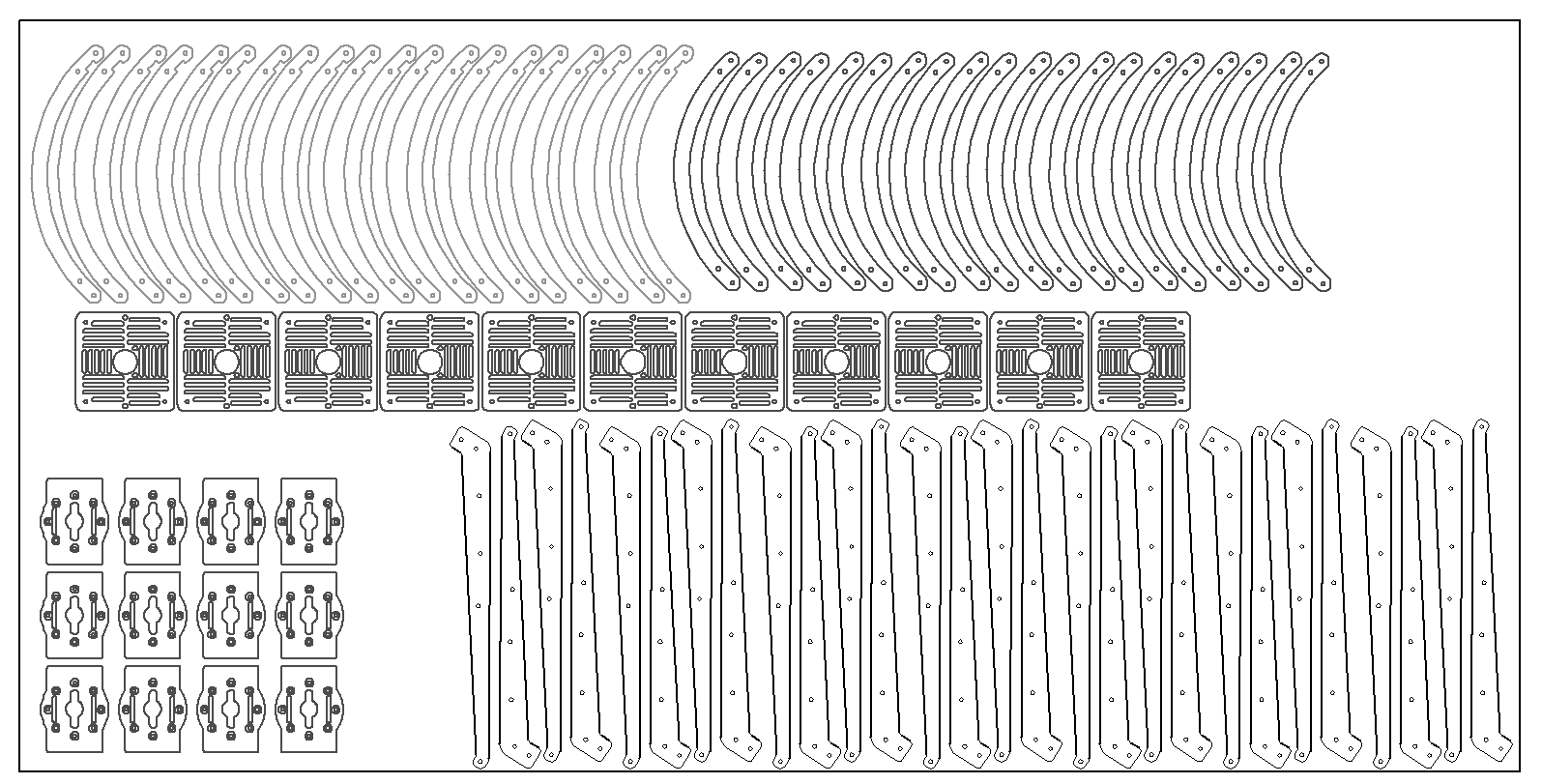 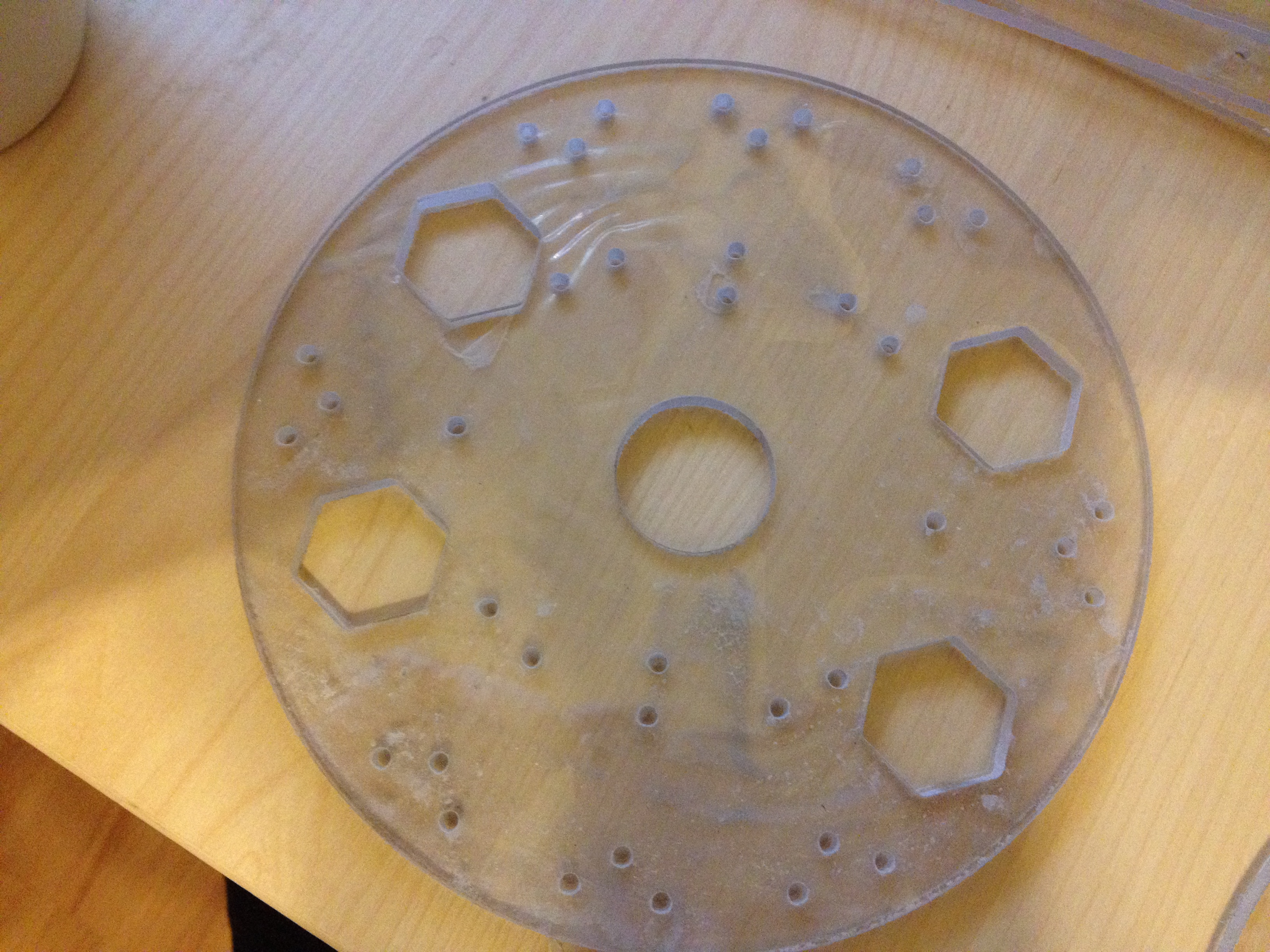 Image 1: The base plate.  This can be configured as a hexacopter or quadcopter base. 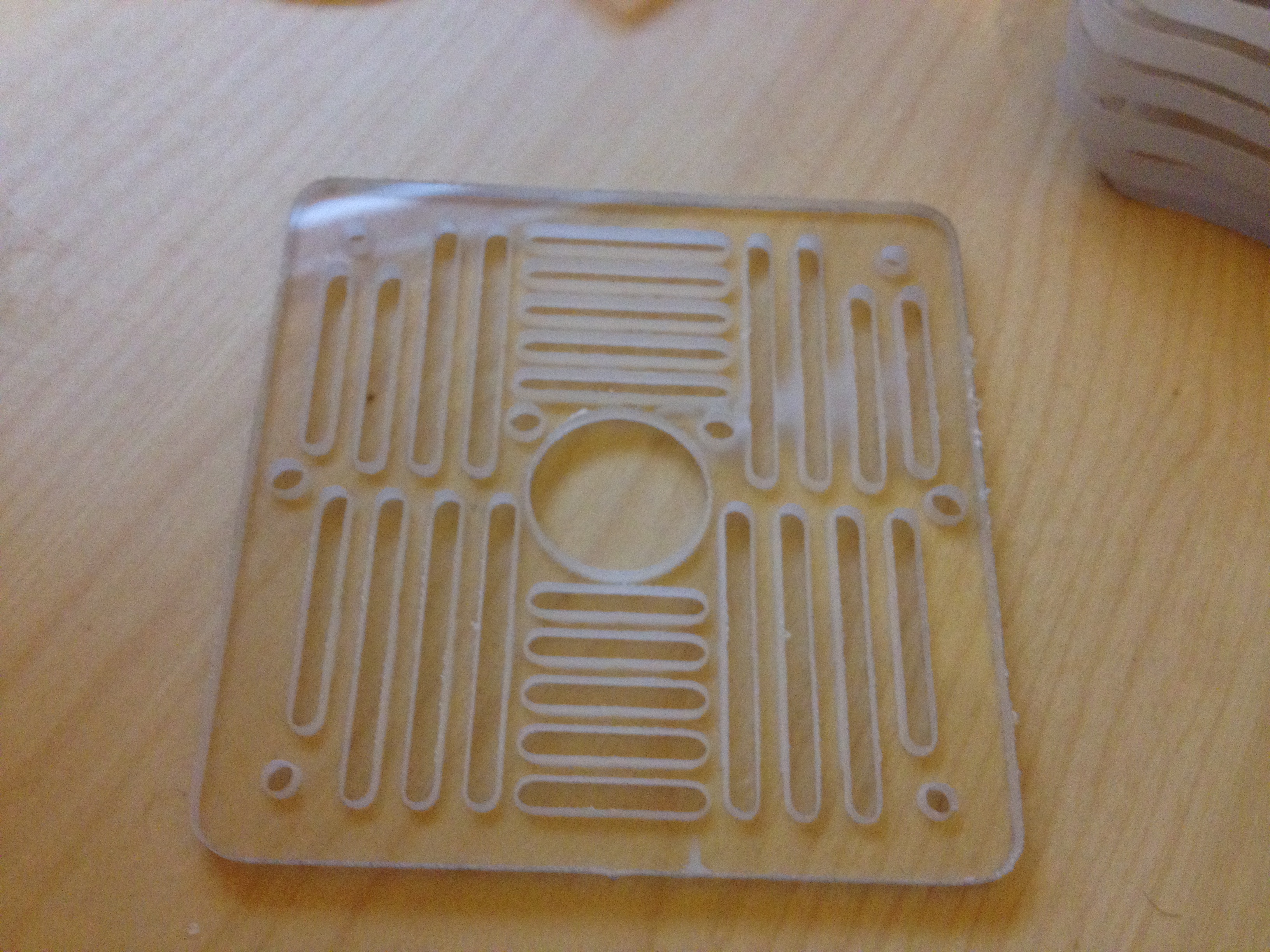 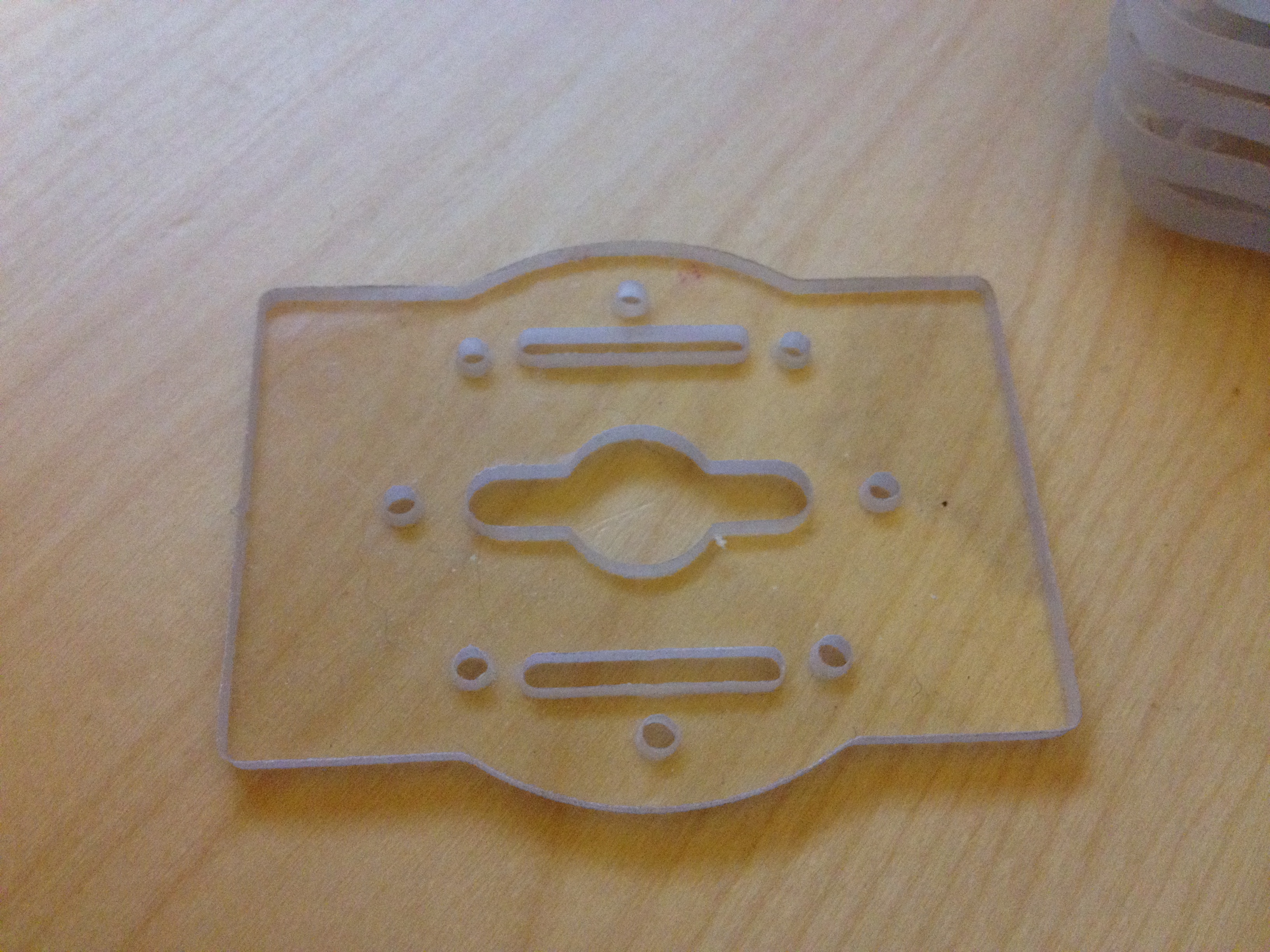 Image 5: Motor mounts.  Notice that they are connected by a runner.  This is because they were too small to cut individually on the waterjet machine. 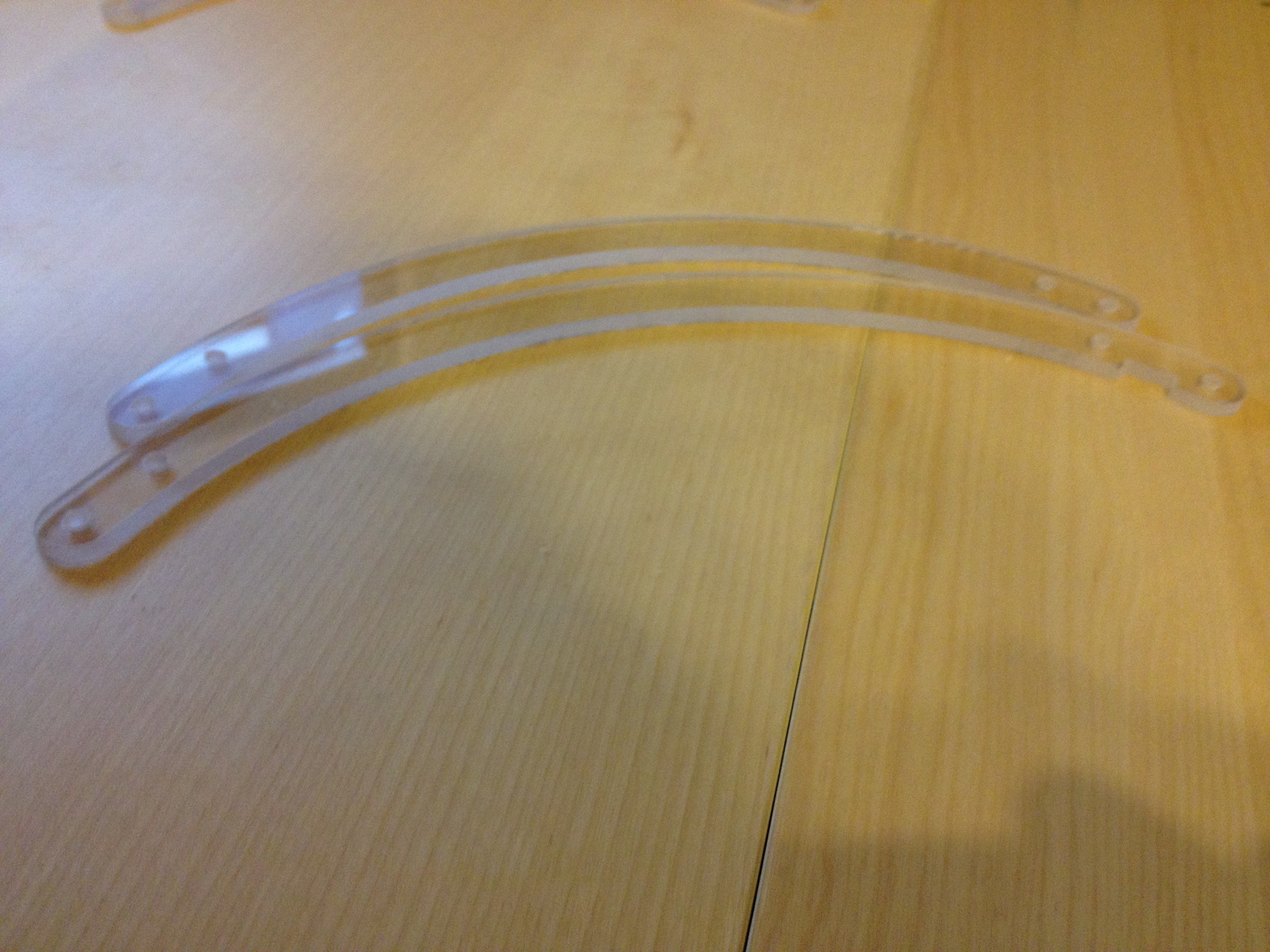 Image 6: Dome pieces of my own design.