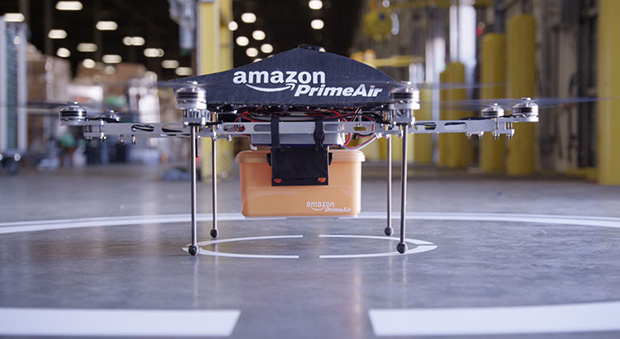 This is a guest post. The views expressed here are solely those of the author and do not represent positions of IEEE Spectrum or the IEEE.

While the idea of an Amazon Prime Air drone dropping onto my doorstep and delivering my latest purchase might seem fun and cool, the reality is it simply may not be needed.

The only reason delivery trucks—such as the large brown trucks we see everywhere—only deliver to me around 4 p.m. each day is simply the time taken for one driver to take each parcel to an address. I call this one at a time parcel delivery. It's the same story for the USPS service. Each day our excellent delivery guy comes to our neighborhood and then spends a long time going door to door.

Imagine if he could deliver to every house at the same time. This would mean he could do multiple delivery runs each day. And in the case of the brown truck, it would mean that when my new purchase arrives at my local distribution center at, say, 2 p.m., it would be actually delivered the same day. That would be possible because our new fast delivery service would return to the distribution center and pick up another load, since now it can deliver to many houses at the same time (at least in a residential area).

But how can this be achieved? Let me say that no flying machines are needed! Instead we just need a new style of truck—one that carries a fleet of robotic delivery vehicles. In this scenario the driver would park in the middle of the neighborhood and then hit "deploy." All the robotic vehicles in his truck would already have self loaded their parcels and, after the doors open, they would scurry out to their addresses to drop the parcels, then return to the truck.

In this scenario, there are no flying robots involved; the robots needed would either be on wheels, tracks, or perhaps legs such as those from Boston Dynamics.

You could imagine the truck goes to the start of a street and deploys these mini vehicles. It then drives to the end of the street and picks them all up. The truck might even just drive slowly down the street and the robotic vehicles would deploy and return while the vehicle is moving. The point would be to empower the delivery driver to be able to handle way more parcel deliveries each day and therefore increase the number of possible deliveries.

In the case of large or heavy packages, you would have multiple robots carry them to the doorstep. Instead of robots of different sizes, I would propose a single size of robotic delivery vehicle that could then combine with others to increase load carrying ability.

Yes, we would all like to receive a package 30 minutes after ordering, but the best start could be to take our current delivery systems and enable the drivers to be able to deliver much faster and multiple times through the day.

The delivery guy of the future, instead of being just the guy who drops a package on your doorstep, could actually be a robotic specialist in control of his own fleet of robots.

Perhaps my son, who took delivery of his own Lego Mindstorms EV3 system this Christmas, will start working on a prototype.