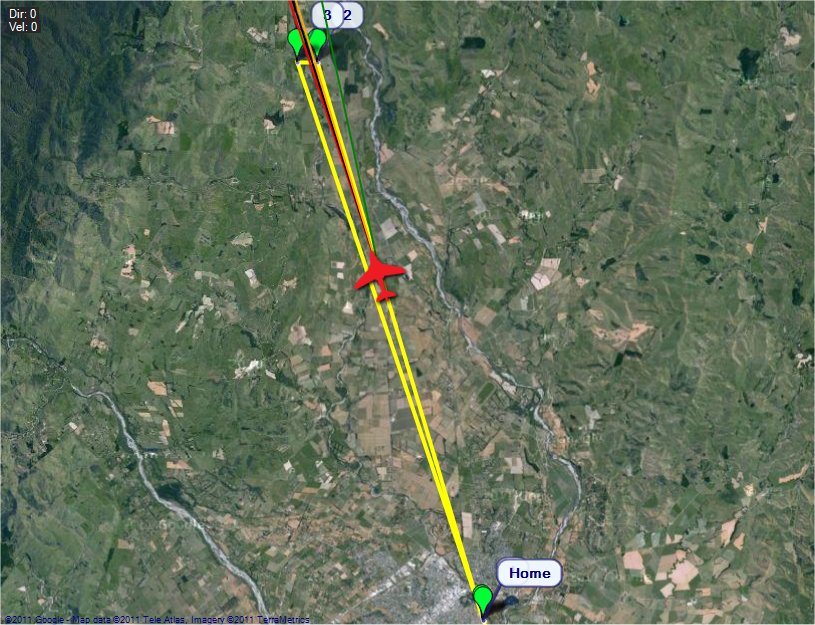 I have recently been pushing the limits of the XBee Pro to see how far it can go.
Unfortunately my current plane (SkyFun) only has a 38 minute duration and a maximum travel distance of 20km, this means the furtherst I have been able to go is 10Km (a 20Km return trip).
I have a 14dB patch antenna which has still shown signal of 85%+ out at this distance.

I wanted to find out how far the XBee could really go.
This meant planning a one way mission.

I spent about a week looking for the perfect start and destination, plotting the course and arranging access to the landing location with a local farmer.

The start point was my normal local park and the landing location was a farm paddock 16Km away.
The flight was over sparsely populated farm land and at a constant incline meaning I could increase altitude during the flight in order to get greater range.

My plan was to launch and monitor the flight from the launch location until I lost contact with the plane via Telemetry. After this I would drive to the landing location where the plane would be circling and manually land.

I calculated that even if I maintained contact with my plane during the flight and it made it all the way that I would still have time to make the 12 minute drive without running out of battery power.
With a tail wind, the plane would average 60Km/h at 45% throttle.

With everything planned and 45 test flights already in the bag with this airframe I was ready.

I launched and the plane took off to the waypoint as planned.
I was hoping for at least 12Km as this was ideal conditions.
The point on the map above shows the point I lost contact which is 10.6Km from the launch location.
The XBee maintained a very strong signal up until the last Km and then it began to drop off very rapidly.
It begins to be unusable below about 40%.

I packed up the ground station and drove to the destination which took just 11 minutes.
The plane was circling perfectly as expected and I put it in FBWA and landed without incident (apart from the slightly startled flock of sheep).

It turns out that the 10Km I had been flying to is around the maximum range of an XBee.

I am working on a much bigger aircraft that will have a 1 hour plus duration at a higher speed so I am going to have to look into more long range options for telemetry. GPRS / cell is preferable as we have excellent coverage here and fully routable and cheap internet plans. However, for experimentation I have been surprised at the distances that can be achieved with an XBee with a cheap patch antenna added on.

Here are a couple of tips for people wanting to achieve maximum range..

- Minimize antenna cable length. My XBee is mounted on the back of my patch antenna and I run a long USB to my laptop. This maximizes gain and reduces lost signal.
- I use either the ground or my car to enhance the ground plane effect. Putting the antenna in front of my car door or right beside my car makes a big difference to the distance. Also keeping it as close to the ground as possible.
- Altitude is king, the higher you can fly the greater the achievable distance. Due to the fact my destination was on an incline, my end waypoint was 400m high relative to my starting point.
- Fly long straight missions so you can line up your antenna properly, I am building an antenna tracker that removes the need for this but Ardustation2 is currently broken since the last Mavlink updates.