From more than a month from now Aug 2014, I posted a blog titled ZERO_PID Tune for Multicopter, It was about an algorithm I developed that allows quadcopter pilot to reset Gyro PIDs to ZERO, and fly! Using this algorithm, the quadcopter was able to generate valid values for P & I, and can successfully fly, the demo was on Multiwii code. Since then I was working on enhancing this algorithm, as I discovered some opportunities for improvment.

Although as you can see in the video that quadcopter really flies, there was a devil in the details. P-factor & I-factor would saturate if you fly long enough – I discovered this later few days after the video-. Although quadcopter was safely taking off, but flying for a long time -1 to 2 min- in this mode will make P & I saturate especially if you play with sticks hard.

Although my background is engineering, but I am not a big fan of mathJ, so I started to simplify the problem as much as possible, and avoid complex math. The model depends on angular velocity of gyros only. It assumes there is no interference between different axes –which is true theoretically at least- as actual Gyro MEMS has slight interactions between axes. 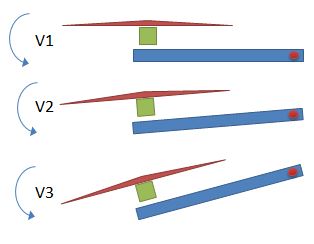 First, let us start by a quad arm with a motor on it as in the figure, initially the motor is running, but you do not know if it is running fast enough to generate exact thrust to keep the arm with angular velocity zero. Again let’s assume that the motor is not producing enough thrust, so when reading the gyro we will get V1 = v1. With single value you cannot judge, you need to read two values, so you wait until the next IMU loop and read V2=v2.

Now assume that both V1 & V2 have the same signs. This means the same direction, which is falling down –counter clockwise in the figure-.

Condition#1:     If V2 > V1 : this means the arm is accelerating and the quad in danger of flip. So let us reduce the P value by one if the difference is high enough.

Condition#2:     If V2 < V1 : this means the arm is decelerating and the quad is trying to adjust itself to reach angular velocity zero. However there is a danger here that the deceleration is so fast so that it will not only stop the arm but will move in the other direction and start oscillations. So let’s decrease P value by one if the difference is high enough.

Please note that by design, quad stability is active stability, i.e. you need to monitor and adjust to keep it stable, so whatever the P value is, it will oscillate, the idea here is the oscillation amplitude should be minimal.

Condition#3: What if V1 & V2 has different signs, i.e. our quad arm has reversed its rotation direction. This case is ignored as it will always happen due to oscillations as I mentioned in the previous paragraph. And we rely on condition 2 to minimize oscillations.

What if the arm –in the figure- rotation direction is clockwise, in this case we are calculating the right arm that is falling down. That is why we use abs(Error) . So we always consider the falling arm.

ZERO_PID algorithm can be written now as follows:

As we can see the above algorithm changes P-factor only. In the first version I used a parallel condition for I-factor that increases and decreases it with 0.1 steps. Later I discovered this was not the best approach.

Algorithm idea looks simple; however we need to consider some points that affect the performance of the algorithm.

As I mentioned in the beginning of this article, I was calculating I as a percentage of P. Well in an article about sensors & PIDs I mentioned that I component in PID for gyro is used for restoring, it acts as a memory, because it is based on many values not the most recent one as P or the difference as D. I think about I component as the DC current in a signal or as a trim in your TX. Try to fly in Acro mode with I factor equal to Zero, you will find that if you tilt your try then take your hand of the sticks it will not get back, if you add some values to I-factor, it will tend to restore itself. And this is obvious because the I-component –i.e. the integration value not the I factor value- that was accumulated to overcome your stick need to be reduced back to zero. To have this effect I used a simple average variable to calculate the average value of gyro readings in a time window, and if the value is not Zero –higher or lower than a certain range- I is incremented otherwise it is decremented.

I attached a working code, you can use it to fly in ACRO mode only, as I used other PID parameters to as ZERO_PIDs parameters in order to study the effects above.

ALT_I: represents number of samples used for averaging Error for calculating I factor.

These figures are taken from MultiWii EZ-GUI for 3 flights: 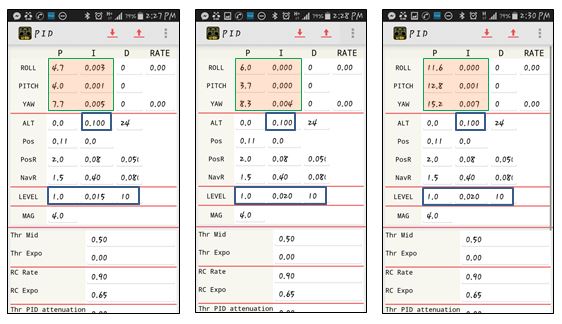 as I increased High_Enough_2 to 20 P values started to raise, especially in the third trial where I played more aggressive with quad compared to the calm first two flights.

Still everything is experimental, and try it on your OWN RISK, try to fly smoothly and dont take off suddenly, let it leave ground easy.