This is really frustrating, I had an RCexplorer style tricopter working pretty well.

I used to use DT750 tried with both 10" and 11" props, the 10 was a little smoother but either worked.They worked with default settings in Arducopter 3.2, I did try altering settings a little but not much improvement. 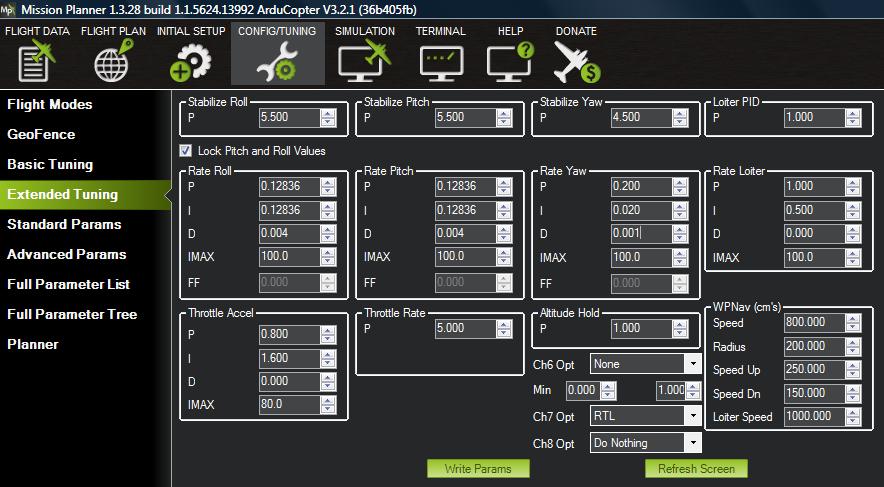 Just upgraded to SunnySky 2216 800kv, I was expecting the same kind of performance but less vibration.

What I got was a tricopter that struggled to keep a fixed position. appeared that either P wasn't high enough so it couldn't react quickly enough to hold steady.Or that I was causing slow oscillations...

So anyway I finally managed to complete an autotune with the SunnySky 2216 800kv, and these are the results: This YAW stats have been altered since, I tried that low IMAX after seeing its what others used, but it something in those YAW PID caused my tricopter not to be able to hold a straight line going forward, I changed them back.

But anyway, look at those rate PID all much higher than I was expecting, does it seem wrong to you? (they are outside the 0.8 to 2.0 range suggested by http://copter.ardupilot.com/wiki)

I had been trying to fix my problems by lowering these values.It almost seems too twitchy now so I am trying to turn them down a bit.This is where I'm looking for advice!

I need the fast reactions as I want to fly in conditions that are not always calm, but I want it to be smooth not aggressively twitchy.

Which settings should I be altering for that?

It seems hard to find a sweat spot between not reacting fast enough to hold steady and being too twitchy.

At the moment as well, if I hover it does seem fairly good, but as soon as I start moving it sounds like there is a problem, doesn't sound smooth, sounds angry, as if its struggling to do what it wants.

I think something needs turning down a bit but I am unsure which one to start with.I will ofcourse keep trying, but I wondered if there was maybe a database of PID stats that other people used on different configurations that we could compare against and use as a benchmark?

Also I'm have trouble with yaw overshoot, I can understand if I am turning hard and suddenly release stick that it might cause a slight wobble, but testing it seems to do this even if turning extremely gently, I thought maybe the yaw P was too high but when I turn this down I have trouble maintaining heading.

Thanks for any comments