Hello, I have been frequently flown with APM board 2.5.2 so far without major problems until recently updated to the latest firmware.

After updating, I see "BAD GYRO" message appeared on the HUD and the attitude become upside down.

I investigated the issue and found many people already experiencing this kind of issue and numerous report pointed about faulty regulator. When measured the 3.3V rail I get 4.5~4.7V on the line.

So I tried to replace the regulator with MCP1700 which is about the size of the original TPS79133DBVR regulator as shown in the following picture.

Next I tried to isolate the 3.3V rail with the output of the MCP1700 to see if the regulator is actually causing the voltage problem. Interestingly enough, the output gives about 3.3V with lots of jitter and the isolated 3.3V rail shows 0.7V flowing through the entire line!

Then I close the 3.3V rail with the output of the MCP1700, the rail becomes about 3.3V and settled. No jittering, no noise but strict 3.3V output.

However If I power up the board with the MCP1700 output connected to the 3.3V rail, the line become 4.5V again!

So I suspect something is triggering the 3.3V output when booting the system and see what is going on the 3.3V rail when starting up.

The next picture is what I found. When the board powered up, 3.3V looks ok but exactly 1 second later, the rail becomes 4.5V and fluctuate.

So my next question is what exactly happening at 1 second after the boot.

Is there anybody can answer my question? 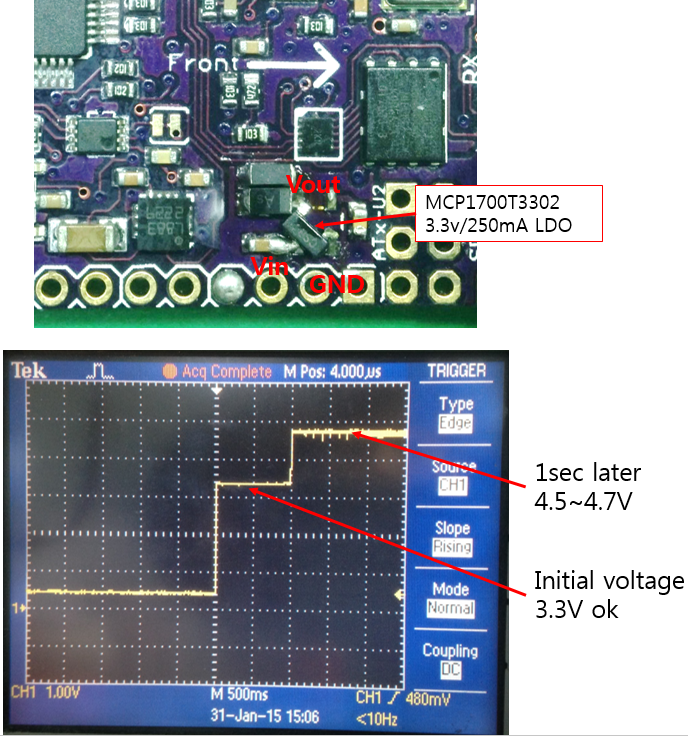