I'm in the final stages of building an octocopter around Pixhawk 2.1 and am just trying to sort out how to wire power.

The craft is a Tarot X8 running the standard 40a esc/4114 320 motor/1555 props that Tarot recommends, along with a pair of 6S 8000mAh batteries carrying a Sony a6500 camera and gimbal.  All up weight will be around 7kg and e-calc expects hover current around 40a with a maximum around 120a.

Having had both motors and batteries fail in the air in the past, I'd like as much redundancy as possible. Dual power supplies sound great on paper, but how do I hook it up to be as fail safe as possible.

My current thought is to have each battery independent to the last moment. Each battery would have its own APM power module connected (Hobbyking 10s/90a modules), then just before connecting to the power distribution hub the lines would be merged in parallel.

In normal operation, the displayed amperage in the ground control station would be half of what the craft is actually consuming, and I could check logs after the fact to see if one battery is carrying more of the load than the other.

In a failure mode, if a battery loses a cell/explodes/falls off the other battery would be able to take over powering both the motors AND the flight control. I'd notice current on the remaining channel double, a bunch of alarms would go off and I would land before anything else terrible happens.

I've attached a diagram showing what I think this would look like. 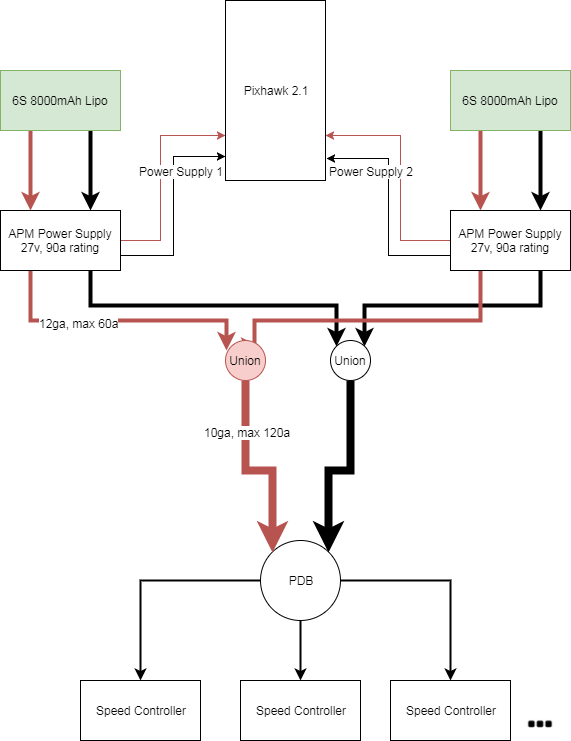 Will this work or am I misunderstanding how I should hook this up?