We did a quick evaluation how much accuracy we could achieve on all axises using a multirotor. We read many accuracy reports from fixed wings and this teaches us that the planimetric accuracy (horizontal) is usually about 1x the ground sampling distance (GSD) (0.5 if you're really good and have better cameras) and that the vertical accuracy (Z) is usually 2-3 times the horizontal accuracy. That's only valid for some altitude ranges, the regular flight altitude for uav's between 80-150 meters. Forward velocity and trigger distance requires a certain altitude to make it work.

In this example case we flew at 45 meters with a hexa at a speed of 3 m/s to get a high 85% forward overlap, making it more difficult for a wing to do the same. 211 photos were taken. The GSD produced is 1.41cm.

The photos were georeferenced using 5 marker points that were collected with high precision GPS equipment. The expectation is that when these GCP's are marked in the image, there's about a 0.5-1 pixel deviation, so it's expected that the error in marking GCP's is about 0,5-1 GSD as well. Sharper pictures and better markers reduce that error.

In this case we had 2 less accurate GCP's, so the planimetric accuracy of this dataset eventually became 1.7cm, slightly above 1* GSD. What we confirmed though is that we got a 1.8cm vertical accuracy for this set, (or rather, the residual error from the mathematical model).

This dataset could have been improved as follows:

In the end, the maximum accuracy that one should expect with this equipment is 1* the GSD and better equipment isn't going to make this magically happen. This accuracy isn't correlated to the real world, that would be a totally different exercise altogether.

Here are some detailed images of the point cloud from close up. Notice the vertical detail of the irregular curb. 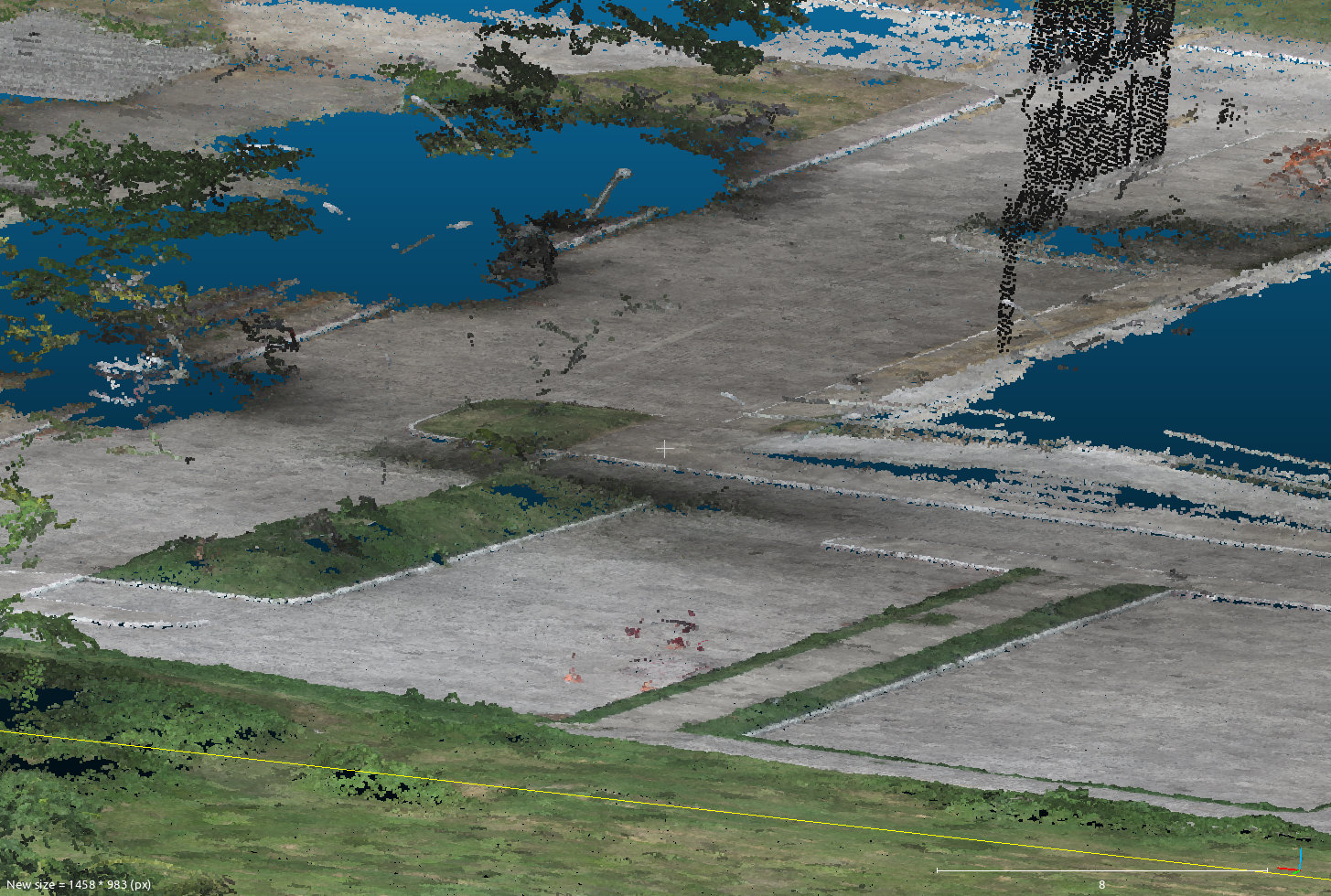 And the detail of a house. The planar surfaces aren't warped, a good indication of excellent georeferencing and accurate point triangulation. This experiment is very relevant, because Lidar is commonly used for "real" precision projects, often considered for work where they need better than x cm precision. Although lidar data is probably as accurate as 5mm, it is also subject to occlusions and the station needs to be moved around a lot to get proper point cloud coverage, so operating it isn't all that easy.

UAV point clouds may always have less accuracy than laser clouds, but they do have the advantage of the bird's eye view: they generate data across an entire region with the same consistency in accuracy and density, whereas lidar isn't that consistently dense for every part of the survey area due to occlusions.

Price makes a big difference too. Lidar stations apparently cost $175k to acquire, whereas uav's probably put you back by $3000. The question that one needs to answer is whether the slight improvement in accuracy is worth the extra money.

What this experiment shows is that also for uav's 2cm vertical accuracy is probably within the possibilities, pending further experiments where datasets are compared against points in the real world.