We have been working to develop a well oiled solution for Aerial Survey and Photogrammetry over the last few moths. While there are a number of off the shelf solutions out there which produce great results, we are looking for something that will cover larger areas at a higher resolution. We started with the X5 as it could be hand launched and was a good platform that flew at higher airspeeds and could progress us into the X7. Here is some of our progress; The X5 is running on APM 2.6 and has prove extremely reliable and stable. The camera used is a canon IXUS 132 running CHDK and shooting on an intervalometer script. The main purpose of the X5 was to learn about vibration dampenning and apature and ISO settigs to produce clear images. This took a significant amount of effort, however we are at the stage where 2 out of 3 images are photogrammetry quailty. 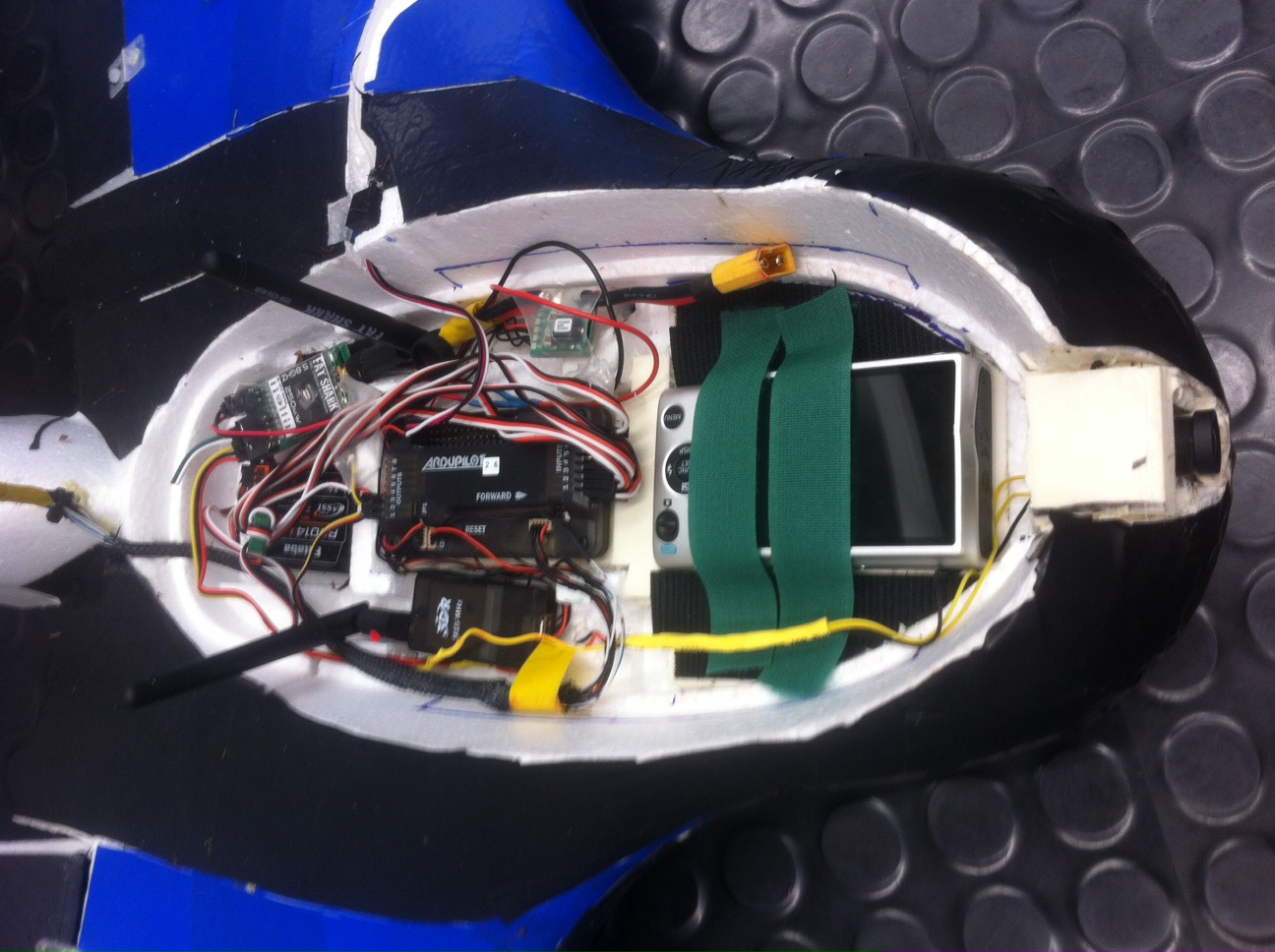 Our test baby has had a few hard landings (things were laid out a little neater when we started) . We are very excited about the recent interest and work being done on laser altimetry in recent months. We are also currently testing one of these devices as flying wings are extremely hard to land manually (especially when they are loaded up with gear). You can see the APM in the middle of the plane, 5.8GHz live video and 900MHz telemetry transmitters, and the IXUS 132.

We found the X5 reasonably easy to hand launch WITH A WELDING GLOVE (it will cut your hand to shreds - not if...when). You can see the camera poking out of the front of the plane. Images are good, however, to get the plane to navigate the survey grid well, it becomes a little twitchy which means that a high number of the images are not taken pointing straight down. Navigation accuracy (Nav Constants and Pitch and Roll constants)  v's image quality is a trade off. Others may have found the perfect solution..we haven't. (Yes we are investigating some of those gimbals). We found the ideal cruise speed with a 4S 5000mAh battery was about 12m/s and we are getting about 30 mins of flight time. We have been using Agisoft Photoscan which works really well and appears to be more flexible than Pix4U. We have no surveyed ground control in the images, and we have no geotags in the photos as we were running an intervalometer script. However, it was great practice flying and processing, changing settings and trying again. You cans see that you lose images when the camera is not pointing down and loose some of the survey area. We have found that it is better to not use bad images and have gaps, rather than use them and distort the good data.

Once we had some confidence in what we were doing, we unleashed the BEAST! First of all, the X7 is more streamlined than the X8, but doesn't have anywhere near the same room for hardware. If we were to do another flying wing, we would try the X8. We are running the X7 on Pixhawk and have a nikon J2 taking photos. The J2 is triggered from the Pixhawk via an infrared LED shutter controller. The Nikon is snug in expanding foam with its lens fitting nicely into the camera hole in the X7.  With decent batteries and a big camera, you simply can't launch the X7 by hand, so we have built our own heavy duty catapult powered by 4 spear gun rubbers; 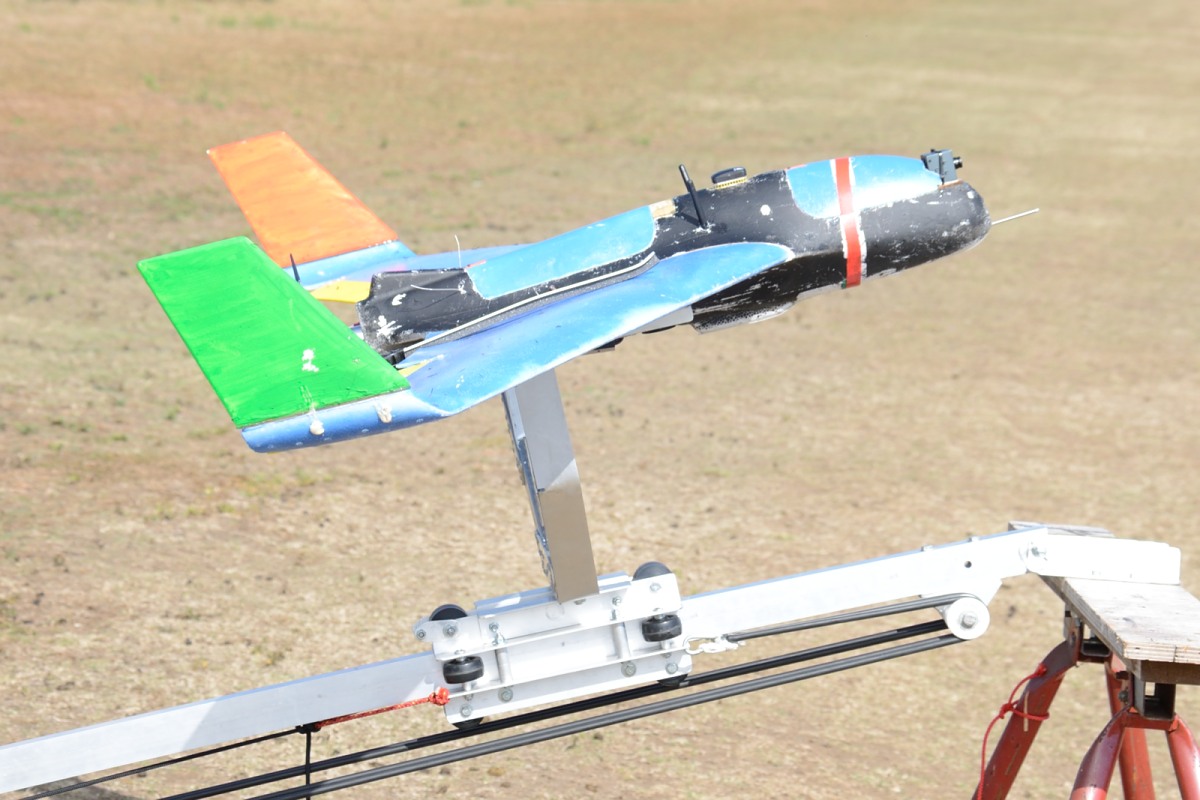 It took a while to settle down the nav and flight constants for the X7 but it flies beautifully once tuned. It cruises at around 15m/s and is far less twitchy than the X5. Photos are higher resolution and a lot sharper. We love it as an aerial photogrammetry platform, however landing is still an issue. As well, as we are only running 4s batteries, it's always touch and go as it comes off the end of the catapult. We are still playing with battery/motor/prop combos to get the optimised take off and duration.

Again, using Agisoft Photoscan, (with Geotags, but no ground control), the results were extremely pleasing;

We are still playing and tuning, but our focus at the moment is;

1) ground control -we are looking at a network gps system where you can drop a bunch of transceivers around the survey area and have them log back to a central PC where only one of the transceivers is located in a surveyed location.

3) We have purchased a 757 Ranger to try slower speeds, but significantly longer endurance to see if it improves the sharpness of the images.

Anyway, this is what we are up to. Would love to hear comments from anyone else out there chasing photogrammetry.