Seven Five years after this community created the ArduIMU V2 (and later V3) project, it's back with a much improved version on Kickstarter, with wireless, the latest sensors and processors, datalogging and more! (The Kickstarter project has their chronology a bit wrong; 3DR didn't exist in 2007, and this project started as a private project by Jordi Munoz and Jose Julio. In 2009 it became ArduIMU V2 and V3 under a DIY Drones banner).

Initially, the ArduIMU project was started as an open source project by 3DRobotics in 2007 to create an inertial measurement unit based on the Arduino™. We contributed to the software development of that project, but, the initial ArduIMU was meant to be used solely as an inertial measurement unit. We want to do better than that; so we developed a brand new platform with other sensors such as a barometer, relative humidity sensor, and light sensor. We also included wireless communication capabilities as well an SD card for data logging and storage. Since then, we have gone through many revisions, adding even more sensors and functions which are present in the latest ArduIMU V4. With this new augmented and improved sensor board we are redefining the term IMU. We proudly present our Arduino™ based Integrated Measurement Unit: the ArduIMU V4.

Our team squeezed a huge amount of functionality and sensors into a tiny form factor: π cm x π cm (a 3.14 cm x 3.14 cm square PCB). It can fit into a small plastic case as shown in the video.

Several people from the open source community have joined in and helped us develop the hardware and the software for the ArduIMU V4. The ArduIMU V4 went through various development phases starting with multiple discrete sensors up to the latest and best (and most cost-effective) integrated inertial measurement chips. We have designed the hardware from the ground up to provide functionality never before seen on these devices.

The ArduIMU V4 is not just useful to applications which require inertial measurement, but has evolved into a powerful and versatile hardware framework for hobbyists, makers and hackers. After using it first-hand, we believe that the ArduIMU V4 is a must have for Arduino enthusiasts, developers, hackers and tinkerers.

So, what's actually on the ArduIMU V4? 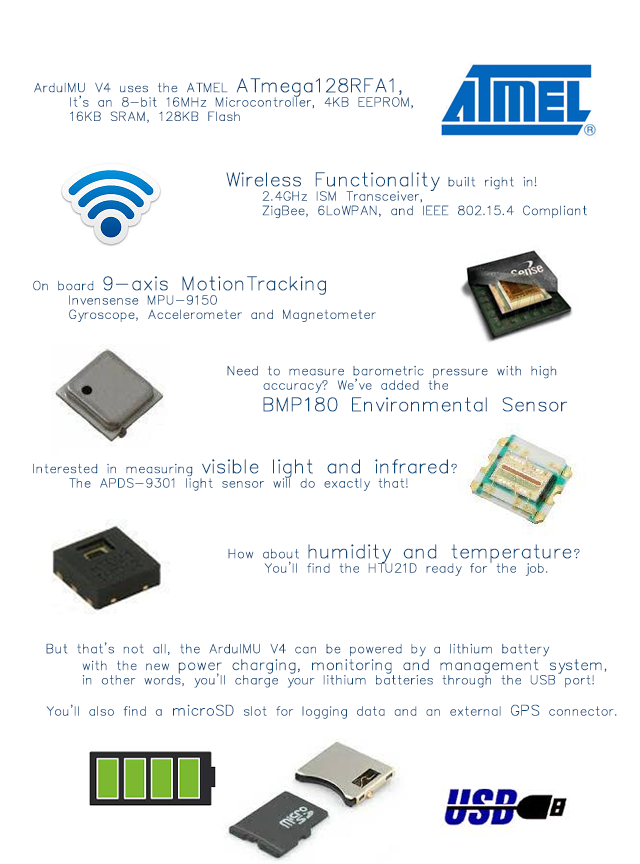 What's on the new ArduIMU V4?

Of course, we included an FTDI chip (USB UART, FT230XQ) on the ArduIMU V4 board so the communication with the host computer can be done easily and directly from the board using the attached micro USB connector. We've also done the hard work for you and included a lithium battery fuel gauge (charging state), and charging circuitry right on the ArduIMU V4 PCB, all you have to do is connect your ArduIMU V4 to the host computer (or other regulated 5V external power supply) and presto! it charges for you. Since we can't predict your unique requirements, we leave it up to you to pick a battery with appropriate size and capacity.

What can you use it for?

The ArduIMU V4 gives you access to SPI, I2C, UART (UART0 & 1) (UART1 is broken out as a GPS connector port), analog input and PWM output. This will allow developers to take their own ideas and design and develop custom shields for the ArduIMU V4.

And it doesn't stop there! We were able to compile the Contiki OS on the ArduIMU V4 and use it for various projects, including implementing 6LoWPAN for a network of multiple ArduIMU V4 units. Welcome to the Internet of Things! 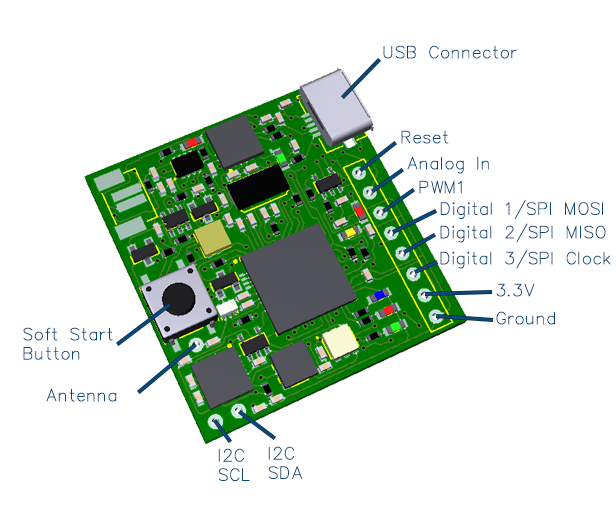 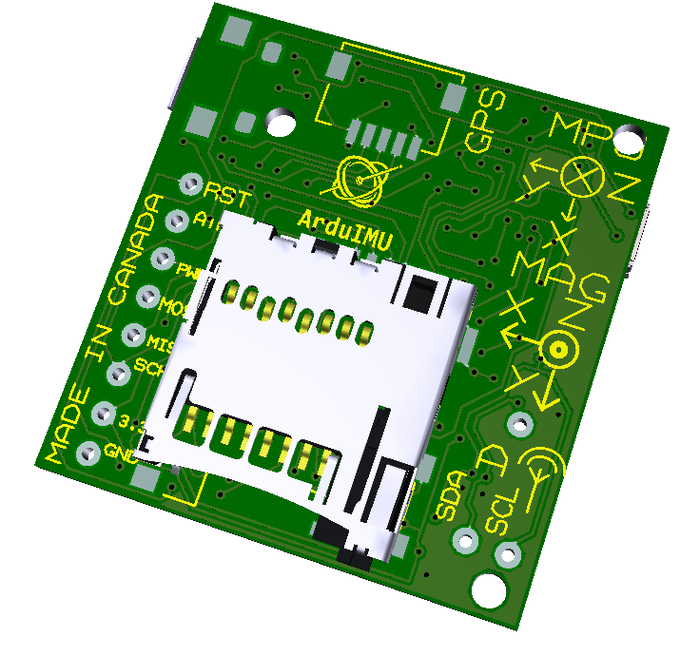 Here's a handful of cool ways you can use the ArduIMU V4:

How do I communicate with the ArduIMU V4?

ArduIMU V4 has a built in Micro-USB port for charging and communication with a host computer. Since we used a standard FTDI USB-Serial chip, you don't have to worry about finding finicky drivers to make it work. To communicate wirelessly, you simply use two ArduIMU V4 units and set up wireless communication between them. Of course, the ArduIMU V4 can do both at the same time, so you could have one ArduIMU V4 out sampling data and sending it wirelessly to a second ArduIMU V4 that is plugged into your computer's USB port to do some heavy number-crunching.

Existing ZigBee devices can also be used to communicate with the ArduIMU V4. However, while this feature is supported in hardware, we are still working on an easy to use Arduino-style framework to make this feature more accessible to those with little micro-controller development experience.

We have also designed an ArduIMU V4 compatible receiver based on the same microprocessor. Besides receiving wireless data from an ArduIMU V4, it also includes the 9-axis motion tracking device and can plug directly into your computer's USB port. The most important feature of the receiver is the SMA port, which allows you to boost your signal range or directivity with a compatible antenna. We are not making the receivers in large quantities yet, but are willing to add it if there is enough interest. 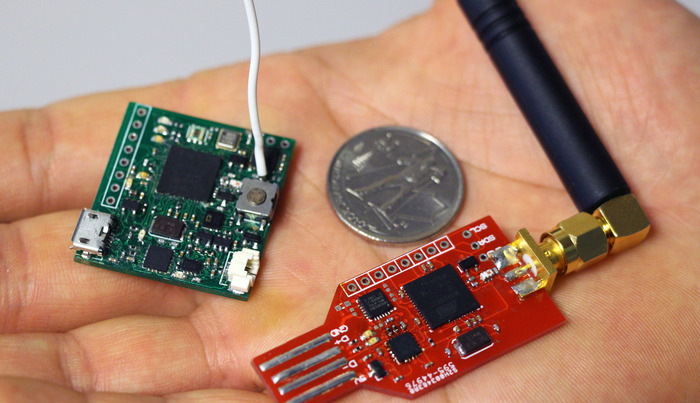 Really nice, it will certainly create its demand.

The text doesnt say how one reads/writes values from/to the sensors. Does everything go over i2c ?

@mP1: Yes, the pressure, humidity, light, acc, gyro, mag and battery monitor are on the I2C bus. The I2C bus is also available for expansion or reading the sensors using another uC as well.

BTW, you can see a handful of demos using the ArduIMU V4 in the following video

Thanks Chris, I fixed the Chronological mistake on the kickstarter page.