0
You asked for it.
Here is the part 2 of my experiences...
(still fiddling with the Rich text formating on this page)

In spring of 2009 when the ice from our training lake, which is in the vicinity of my hometown, melted away, the idea, that was born on that mountain lake half a year before, manifested into a project. It should be an easy-going project with not too much workload, one to two weeks or so...
That were my plannings. Reality showed, that it was not that easy.

What i needed first, was a swimming platform, that was able to carry the sonar system.

The Sonar i bought one year earlier was ideal, because it had a GPS and a sonar combined in

one device. And the NMEA output via the RS232 link also provided the depth below the transducer as

The one i used was a an EAGLE CUDA 350. I think it is still available for an affordable price.

Next, i went into our local RC retailer shop and bought an RC-guided Jetski model boat.

The jet propulsion system seemed to be and ideal choice, because it will not interfere with the water-plants as normal water propellers.

The model was to small to carry the Depth sounder, batteries and the other stuff.

The water inlet of the jet drive was rapidly clogged with algae and other stuff swimming arround.

Then i built a styrofoam platform which was fixed in front of the jetski Boat with sticky tape and hot glue to get the Sonar transported. Better having a bad platform than none :-) 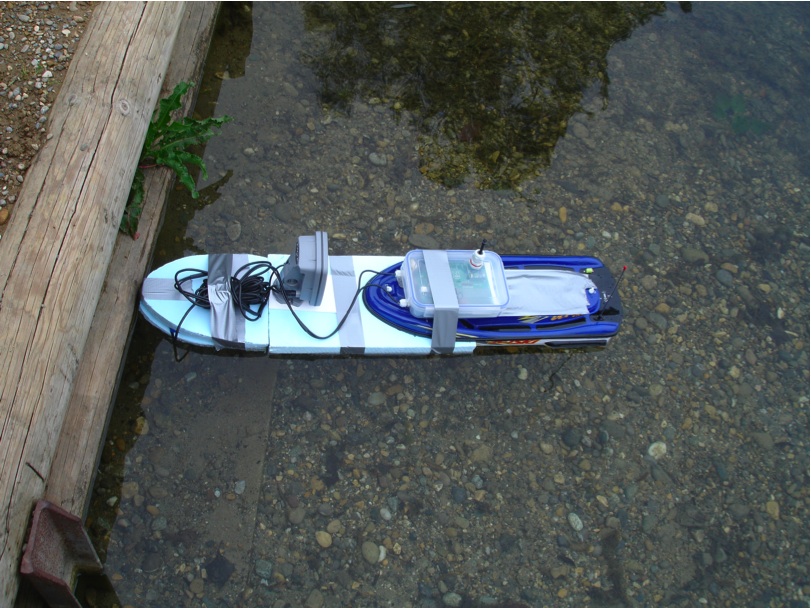 This is the Jetski- push assembly. The Sonar is mounted on the styrofoam in front of the ship, the transducer is below the styrofoam. The Telemetry assembly is in the Tupperware-like box on top of the Jetski. The Barbie-Ken type guy who sits normally there was taken off. (Sorry Ken, no fun this time, enjoy sitting in my cellar on the shelf).

The next problem was the visibility of the ship.

You can´t hardly control the boat when it is some 100m away, even with binoculars.

So i decided to transmit the GPS Information via a telemetry link to the shore and control the ship remotely with a realtime display of the GPS TrackMaker Software. ( http://www.gpstm.com/ )

The Radio Link was excellent , but the realtime response of the Software was not realtime enough to steer an instable assembly.

For the telemetry link i used an evaluation system with a "true R2323 to air" solution from Radiotronix, so i could remotely connect the RS232 NMEA output of the EAGLE Sonar to the Laptop on the shoreline, that served as a ground station.

Here is the link to Radiotronix: This is the "Ground Station" running GPS Trackmaker on Windows XP in a virtual machine on a MAC. On the left side is the Evaluation board with the Radiotronix module on it. The connection to the MAC is done by an FTDI-type USB2serial adapter. (quite weird configuration, but it worked!)

The jetski is a glider boat and with that payload in the aft, the boat refused to glide and the guidance did not work very well.

Fortunately i have no pictures from this assembly (it looked too curious).

Thats all for today...