2
Hello everybody,
this is my first blogpost on this site.
In the following i will describe my experience, my ups and downs while
developing an ArduPilot based depth surveying system for lakes.
I know, this site is primarily for flying platforms. Please leave a comment, if you think that this is not the right place. Maybye, some of my findings are also interesting for flying platforms.

If you are a scuba diver, depth is one of your major concerns.

If you are one an unknown divespot, depth is the major concern.

Two years ago, those were my thoughts, when we went diving in a mountain lake on the North Italian side of the Alps, where nobody had been diving before us.
How deep will it go ?
What will be the structure of the ground ?
What about the slope ? On this lake, the story started.

The native people only had speculations and stories about the lake, but nobody could tell us what we really wanted to know. Discussion with the native people, with every beer, the depth went deeper.

So the idea was born to survey the depth of this lake prior to submerge our bodies into the unknown.

The equipment consisted mainly of a Depth sounder with GPS (aka Fishfinder), a Body-Board, a GMR walkie-talkie and me, swimming with all that stuff criscross around the lake.

The „Ground-crew“ stood on the lakefront with the second GMR, writing down my „depth-and-waypoint-readings“ .

In the evening, all the waypoint data was collected and put manually into the laptop, running an old Version of the FUGAWI software. The depth profiles were manually drawn on a few sheets of paper.

The result was not very spectacular, the profile of the lake had mainly the shape of a bathtube, filled to one third with mud. Here i am mounting the Sonar to the Body-Board. 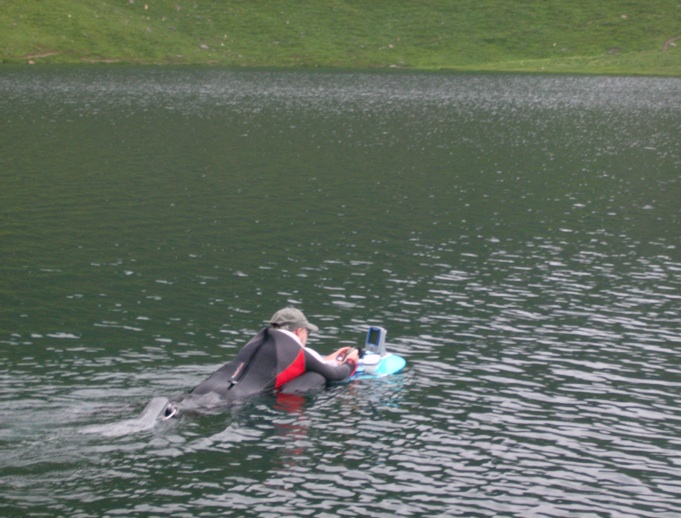 surveying the hard (and cold) way...

But, what lasted, more than the result of that action, was the idea of automating that process.

To be continued...
Tags: ardupilot, ship, sonar, survey
E-mail me when people leave their comments –
Follow