(I´d specially like the last part...)
Hi All,
this project could be a bit out of scope here but this is also a recycling project. I used an old Ardupilot board and 3 old servos to construct this robot... And there is also a nice story behind this project:
Some weeks ago, my daughter (4 years old) said me:

"...dady, you are always playing with your flying robots, when are you going to construct a robot for me?"
You can imagine my face, so I started this mini project for her... 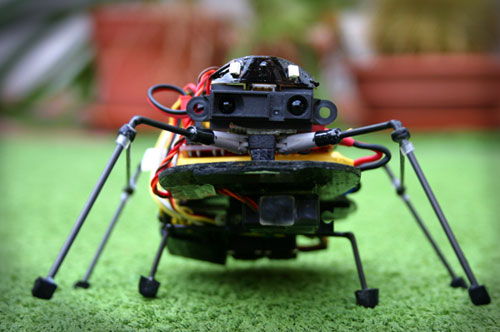 I used a very simple and minimalistic hexapod setup (only three servos for six legs). I had used this typical setup long time ago at University but this time I tweaked a bit the design playing with the geometry of the legs, the body and the position of the center of gravity to let it do some funny movements like seat, jump, dance, some acrobatics...
I added also an IR distance sensor for automatic obstacle avoiding and two eyes (LED´s)
This robot has also a simple behaviour scheme (in autonomous mode). The robot becomes "tired", "bored" and "happy" and you can interact with him. The eyes also show different patterns depending on the state of the robot
The robot has three modes:
-Manual Mode : I used the HW mux in the Ardupilot board so you directly control the three servos with your Tx. Make this "thing" walk is a real challenge, you need to sinchronize your movements, but once you have mastered you can do a lot of fun movements!! (like in the video)
-Assisted Mode : You control the robot like an RC car (2 channels). The walk and turn movements (sequences) are executed by the controler, so if you move the stick forward, the robot start to walk forward, if you move the stick to the right, the robot turns to the right... the speed and turn amount are proportional to the stick.
-Autonomous Mode : In this mode the robot starts to walk avoiding obstacles with the IR sensor. The robot will become tired so it start to move slowly until it is so tired that take seat. When the robot becomes bored it start to call your attention. If you bring your hand over it becomes happy, jump and continue walking... Enough to entertain the kids :-) The body of the robot is constructed with a carbon & 1.5mm balsa sandwich. The legs are 2mm carbon rods and you will need some hinges for the front legs. I used a 6gram micro servo for the middle legs (that balances the robot) and two 16 grams servos for the rear legs (that connects also to the front legs with 1.5mm rods).
I started a simple build log document with more photos here : Build Log
The project was developed with Arduino. The code is very simple, so there´s a lot of room for improvements. Source code: ArduSpider.zip

My daughter also put a name to her robot: Sara, so codename for this project is Sara.
In the last family meeting (this Christmas) this robot was the "star" and look the kids playing with the robot is priceless... Happy new year to all!