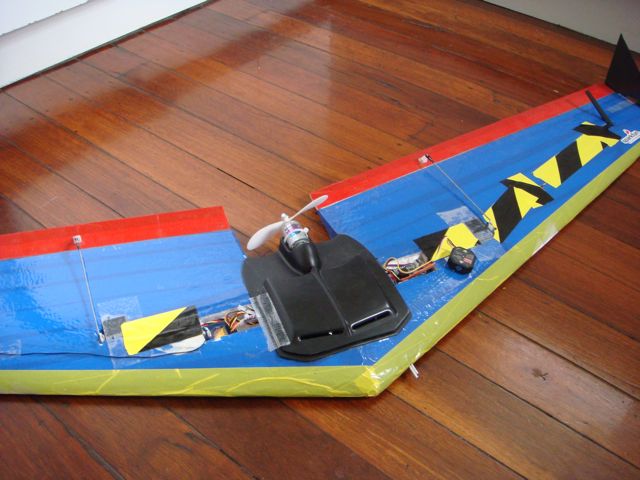 I received my airspeed shield today along with the pitot tube kit and thermopile cable.  So that meant that I had all the bits I needed to get this thing in a flying condition.  I also found an old motor, prop and ESC so I've installed that too.

I discovered that the reset problem I was having (mentioned in my first post) turned out to be due to a misconfiguration in the control channel of my transmitter.  It turns out that the pulse width it was sending corresponded to the threshold level between Position 2 and Position 3 in the ATTiny45 fail-safe code.  This resulted in rapid switching between the two and when this happens, the ATTiny45 sends a reset pulse to the ATMega328 chip.  I changed my transmitter setup and problem solved.  This was a bit of a gotcha because I didn't realise that the ATTiny45 could reset the main chip and I'd been hunting a power problem.

I'm running the Ardupilot 2_7.1 code and I've included my updated config file is here.  I'm running the EM406 GPS and a XBee Pro 900 XSC for telemetry.   Note that I had to change the serial interface speed of the XBee to 57600 baud to match the GPS.  The radio link rate is only 9600 baud on these, however running the default telemetry seems to be OK so far.

A quick test outside showed that the autopilot appeared to be operating in the correct sense.  So now all that's left is to start test flying.  The only big question I have left is the orientation of the XY sensor - as it sits, one of the thermopiles is pointing towards the motor (which gets hot!).  It would be better to position it so the thermopiles were in their normal (i.e longitudinal and lateral ) positions, however to do this, I think I need to modify the code since it doesn't seem to be a configuration option.