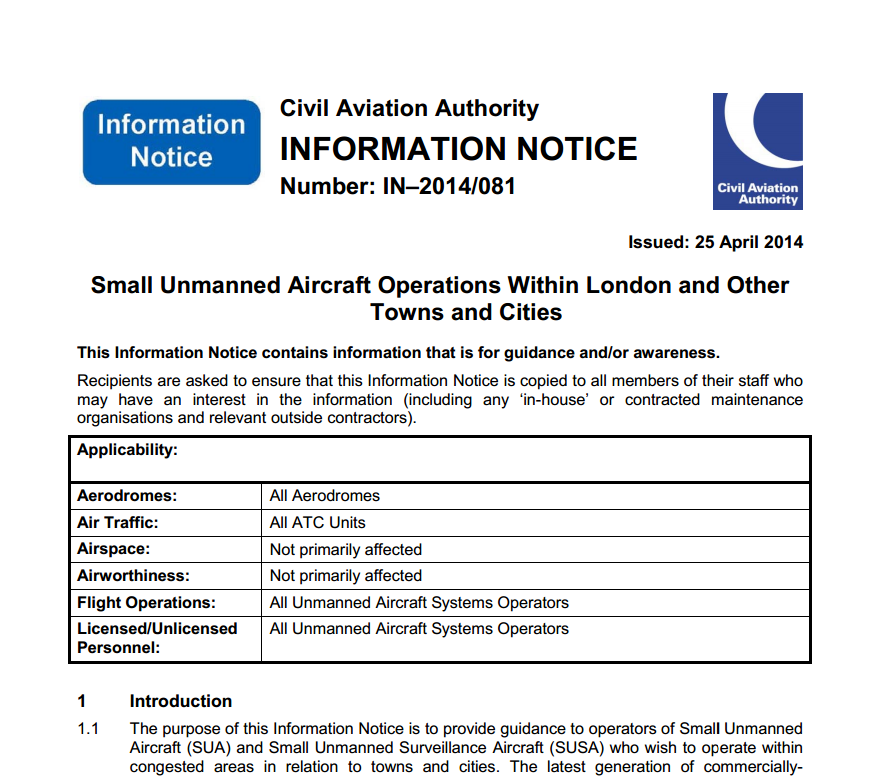 Credit to British CAA for pressing ahead on sensible integration of UAVs into British air space. This document addressing congested cities including London.

1 Introduction
1.1 The purpose of this Information Notice is to provide guidance to operators of Small Unmanned Aircraft (SUA) and Small Unmanned Surveillance Aircraft (SUSA) who wish to operate within congested areas in relation to towns and cities. The latest generation of commercially-available SUA have very advanced capabilities in relation to their size and cost; this has led to a surge in their utilisation for a wide range cinematographic and survey tasks and an increasing demand for their employment in urban areas. Operations in urban areas require an additional understanding of the complexities of the environment and of the safety and operational limitations that are suitable for London and other towns and cities.

1.2 In addition to the general guidance on areas of operation in this Information Notice, additional specific airspace guidance for operators wishing to undertake aerial work and surveillance (filming and photographic) operations within London is given in paragraph 5. Most of the principles and procedures described will also apply to other large towns and cities within the UK. London has been featured due to its combined characteristics of population density, commercial air traffic volumes, large blocks of controlled airspace down to the surface, two major airports, a low-level helicopter route system, a central licensed heliport and several specialised restricted areas.