Hi all. Been a while since I posted, but thought I'd give a bit of an insight into what I'm doing with "Terence" - my medium lift/endurance quad. And today is as good a day as any, as I got the latest CF samples in. And it's partly it's the start of the build instructions for when it goes live So lets build...

Part one is the main airframe, part 2 will be the electronics.

1. Construct the sensor tray, and attach it to the bottom of the battery tray. The space is for the PXflow board - obviously you won't be running all three at once. Of course, I added the Swiss flag at this point, naturally...I also added the rubber for the battery bay - this is the non-slip stuff you get for your car dashboard to stop your phone slipping around.

I also inspected the CF - measurements are all good, and the reduced thickness has shed some weight, and hasn't really lost too much strength. Certainly strong enough to hold the optimal payload (16,000mah 6S). I have a picture with it holding 4 x 4500 in 4S...that's 18,000mah (4S). So should have good flight times.

I still need to get a pxflow to test these mounts. This plate will need recut, after the tolerances for the optiflow failed - you can see the lens touching the CF. I need to cut that section out. The sonar peg holes could do with a tiny (0.5mm) bit of adjustment as well. 2. Added all the standoffs to the bottom plate. I'm using the extended ones for the battery plate, but that's ok - it's part of the design to be able to extend the depth of the battery bay. Production ones will be cylindrical and black. I'm 50:50 on whether to use nylon ones, give there will be up to 2kg of battery to support over 9 pegs. They're certainly cheaper and lighter. Hmmm... 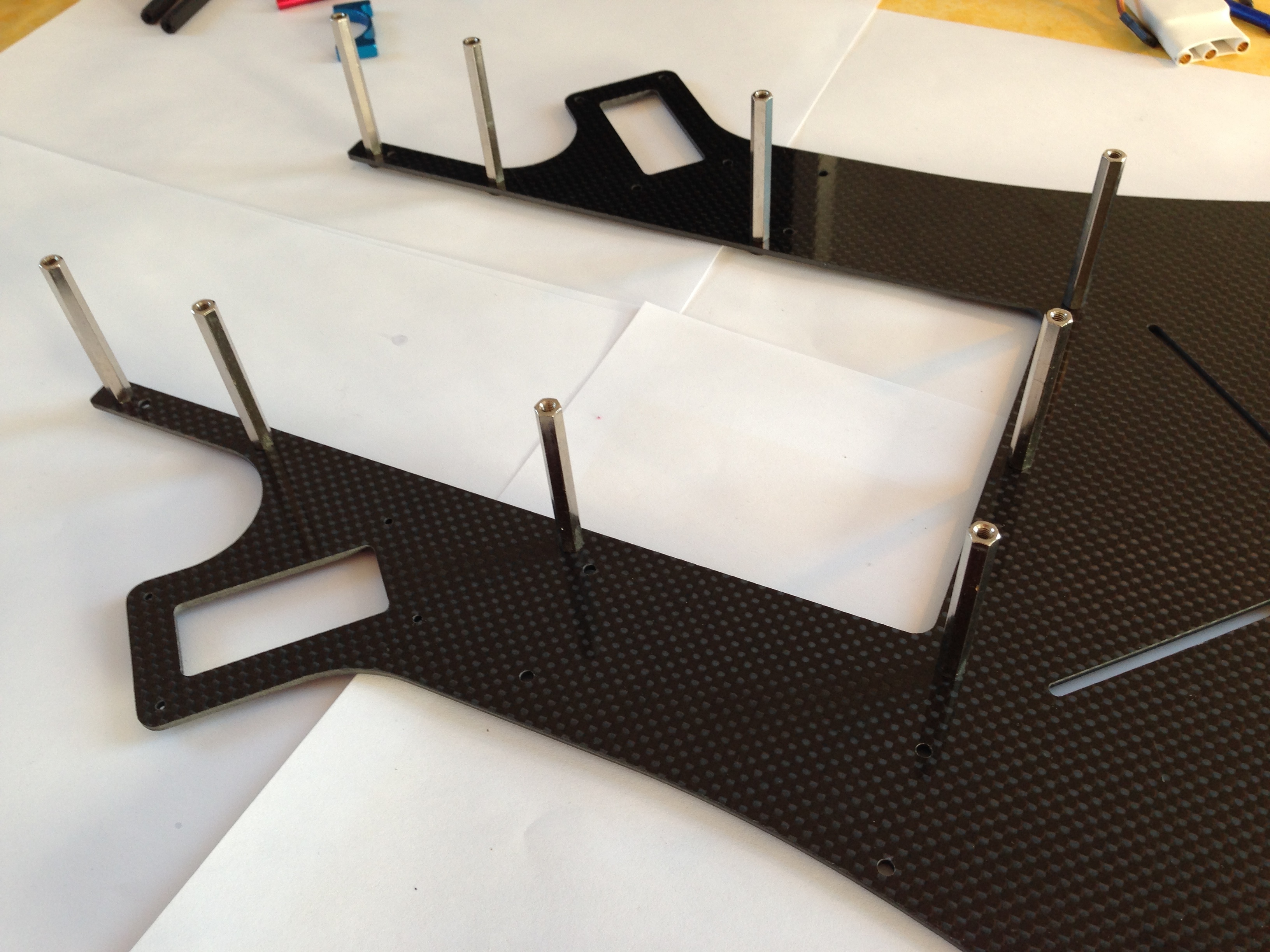 3. Then I mounted the nex5 gimbal, so I could get the peg position...then removed it, while leaving the pegs in place. There is a reason for this - if you leave the gimbal in place, you can't screw down the PDB! They both share the X-shaped guide - the idea being that pretty much any gimbal/payload and PDB can be mounted there. As you'll see later. This version has the battery bay moved backwards for better CoG, but I may still push it back further; a 1kg weight mounted here still has the CoG forward of CoT by 2cm (the old one flew ok with nearly 5cm). 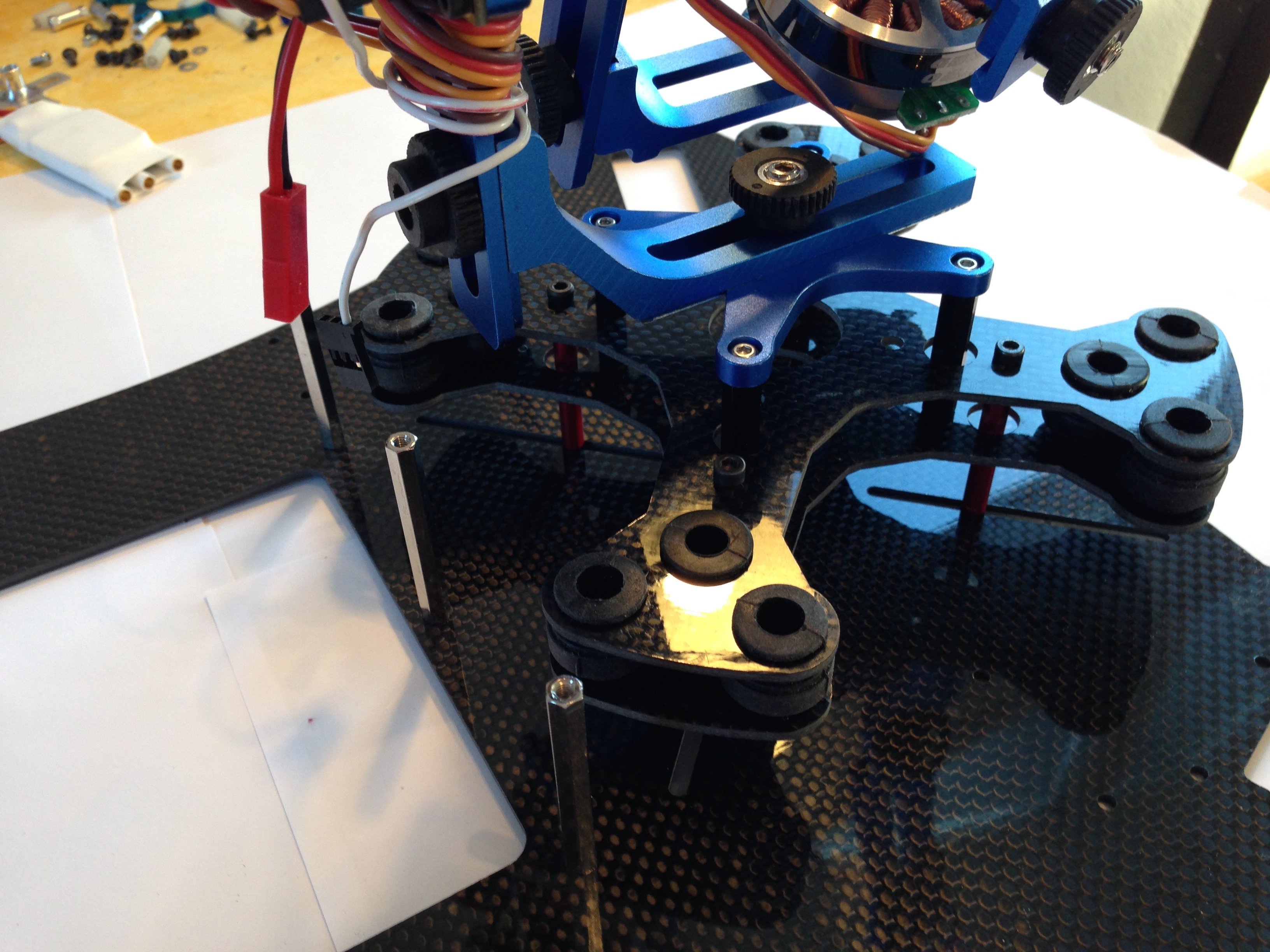 4. Added the PDB, and mounted the ESC's in place, and Covered them the with the shelf. Another set of ESC's can go on top, to give a XY8, but we're building a conventional Disco-style quad. As usual, I labelled all my ESC's with motor number.

The Gryphon has been modified by using smaller standoffs - I wanted to make sure the PDB and the BEC disc fitted in the frame safely. 8cm Power cable extensions were required for 2 of the ESC's, but apart from that, it's working out nicely. i could have gone for a convention PDB,  but I needed to test the clearances of the big ring (especially important for high-draw X8 config).

I was concerned about cooling, but previous prototypes showed this to not really be a huge problem if your ESC's have a decent overhead. 5. Attach all the standoffs and GPS post to the top deck. You can see the mount holes for the pixhawk accessories here. 6. Then the tedious job...attaching the arms! I'm not happy with these M2.5 clamps. The clamps (aluminium) are perfectly strong, but the m2.5 bolts are just too prone to rounding if you crank up the torque. I'm going to redesign around m3 clamps. Some drilling was required on motor arm 4, after I managed to not update the size from last time. #facepalm.

7. Then we add the battery tray we build earlier, and add the top cover for the electronics. So far, everything is fitting like a glove. 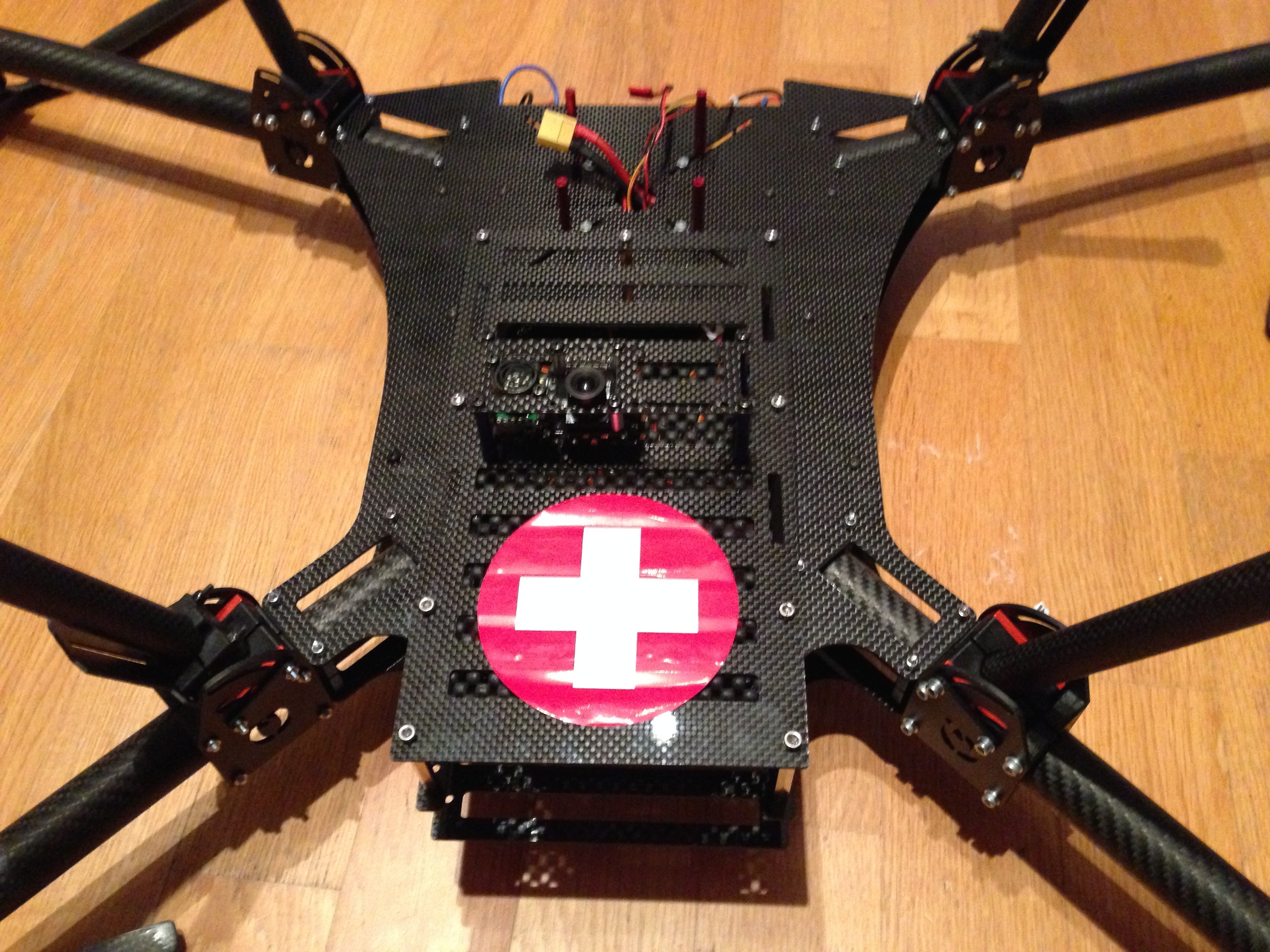 Bingo! Time for the electronics in the next post...